If you think this... 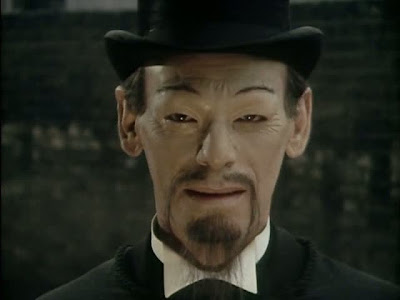 ...is what Chinese people actually look like, then guess what:

YOU'RE A FUCKING RACIST!

ADDITIONAL:
An explanation is probably in order.  This post is in response to an assertion made on the aforementioned 'Talons' thread, an assertion agreed with more-or-less by several other posters, that one might mistake John Bennett in his yellowface prosthetic make-up (see above) for an actual Chinese person.  Yes, human beings - people with brains and opposable thumbs and everything - actually felt comfortable making that assertion in public... though, they do use pseudonyms on Gallifrey Base forum, so maybe that anonymity helped.
Some of the people in question have been engaged in inventive games of circumlocution and tactical point-missing around the subject of the racism in 'Talons of Weng-Chiang'.  The usual disingenuous special pleading, most of it.  'There's a stupid white policeman - does that mean it's racist against white people?' and 'I've shown it to Asian friends and they weren't offended!'.  Y'know, the sort of cretinous, spurious, trivial, entitled, privileged, desperate, dishonest bollocks always trotted out when these waaaah-waaaaahing manchildren feel that their untroubled viewing pleasure may be even slightly complicated ...

Doctor Who was (and is) frequently racist in its representations.  Probably no more or less than most other cultural products of our society, but nonetheless...

Now, to deal with the banalities first, I don't accuse anybody involved in making the show of being deliberately racist.  I don't generally know much about their opinions.  When you hear about their views, you tend to hear that they were liberals or soft-lefties.  People reminiscing about working with Hartnell tend to raise his right-wing opinions on race (and other things) as though they were considered unusual.  And that's not the issue anyway.  I'm not interested in making personal attacks on this or that writer or producer.

The show started nearly 50 years ago... so a lot of it is old, dated, the product of vanished days.  This is often raised by fans who see the problems in certain Who stories but, understandably, are eager to defend them.  Nobody wants to feel that something they love is tainted by racism - that terrible bogey word that stops people thinking clearly because, like so many important words, it's been systematically stripped of its context and has ...

A Critique of the Gothic Seasons

Yes, I know I've already done that joke... but it's too good not to overuse.  Here's my stuff from Timelash II for the first three years of Tom's tenure, generally regarded as the "golden age" (or something) of the old show.  Not much extra stuff.  Sorry.  Oh, one warning: at several points in the essay below I will be going into gush mode.  You have been warned.

Dafter than the Rt. Hon. Lady Daftetta Daftington-Dafton of Daftwood Hall, Daftfordshire. A robot that grows to the size of King Kong (and starts acting like him)... a disintegrator gun kept in pieces and scattered in different locations... a government think tank that turns out to be a cover for fanatical right-wing scientific 'progressives' who think a good way to take over the world would be to destroy it first... umm, well actually the last ten years or so have made that last one seem quite plausible.