His Face, His Hair, Look at It: The Doctors Revisited (Patrick Troughton) 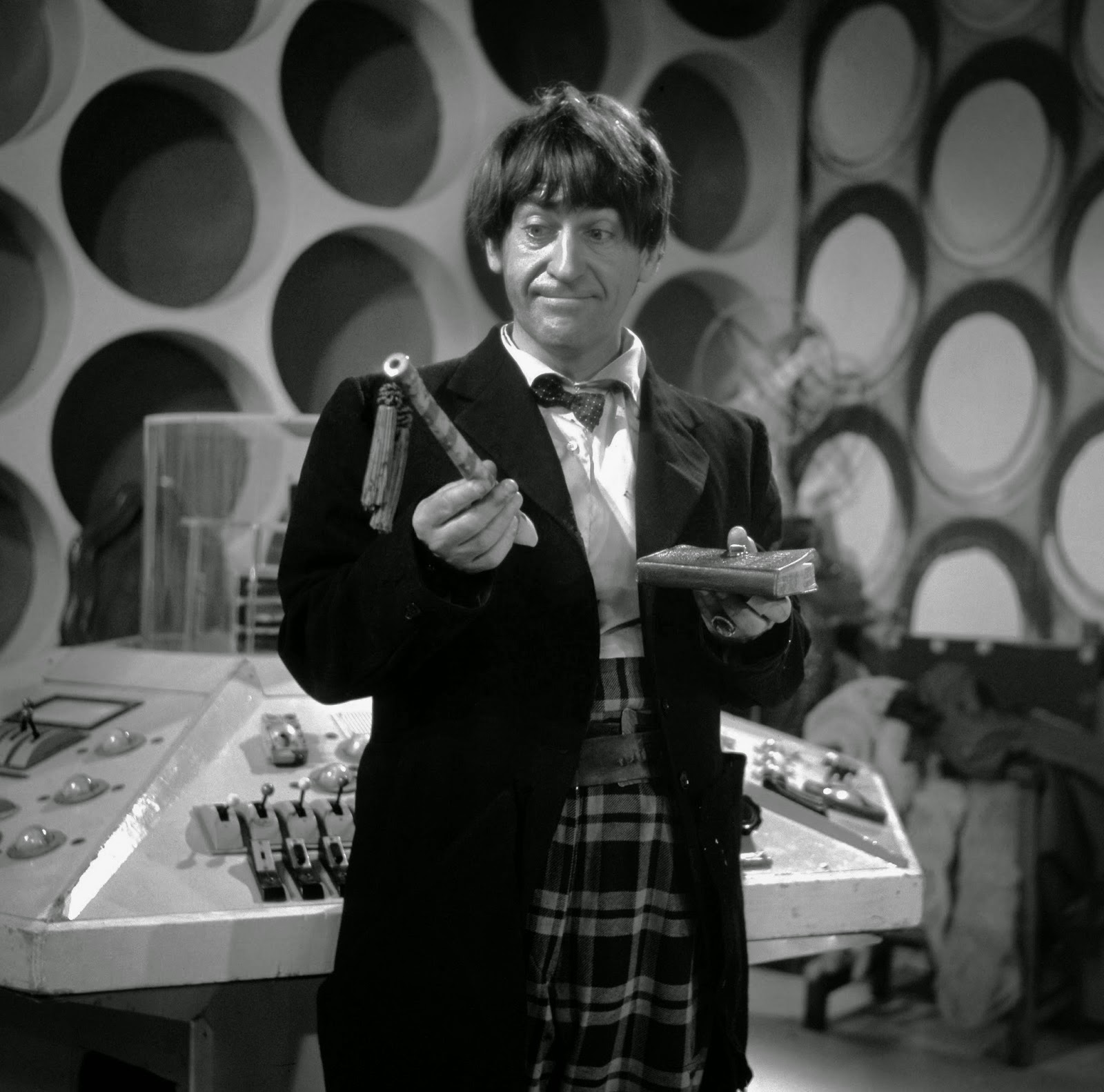 It's not surprising that the Troughton era is, in effect, reduced to a celebration of Troughton's acting, and for the most part, this is a dramatic improvement over the standard narrative prior to this. It is, like the Hartnell era, still entirely about leading up to the present day - the main hook for Troughton is that Matt Smith based his performance on him. This is put up front and trumpeted. So celebrating Troughton for his acting is necessarily about glorifying the present.

All the same, it's not wrong. And it's worth contrasting with the previous official narrative of the Troughton era, in which Season Five was the high point of it because it had all the monsters. Sure, the Ice Warriors get center stage for a bit in what is, in hindsight, blatantly just a teaser for Cold War (with Moffat reflecting that we never see the actual Ice Warriors), but the previous take on the Troughton era where he was the clownish Doctor and it was good because it had Yeti isn't even alluded to.

Instead we focus on Troughton's acting, which is fitting, because it really is extraordinary, in a way ...

Onboard the Silver Carrier, the Doctor and Jamie are eating square blocks of food from a dispenser.

"Doctor, what do you think Victoria's doing now?"

"Yes, of course.  We left her in the late-twentieth century.  Looking at this technology, we must be at least a couple of hundred years on from then.  So unless she somehow managed to live to be more than 200 years old, she'll have aged and died a long time ago.  Right now she's probably just a brittle skeleton lying in a coffin, the flesh long since having bloated and peeled away and rotted and been consumed by bacteria and maggots and weavils and worms and stuff.  Unless they burned her up in a big fire.  In which case she's probably scattered around somewhere in tiny fragments or sitting in a vase."

Lesterson has brought his new toy, his reactivated alien machine, to Governor Hensall's office.  He boasts of how it could revolutionise life in the Colony.  It can end their labour problems, their economic problems... all their problems.

"It can do many things," agrees the Doctor, "but what it does best is exterminate human beings!  It destroys them... without pity..."

He continues.  And the machine speaks too.

The two voices overlap, trying to shout each other down.

The tool, the machine, the product, bellows that it is our servant, while one man desperately claims that it's a killer, an apocalypse in waiting.

The two claims merge until they become one contradictory truth.

Later, the Dalek (I choose to believe it's the same one) murders Hensall on Bragen's orders.

It has a question.  The tool that kills, the dead labour, the mass produced thing, the weapon, the tank, the gothic monster, the repressed thing returning, the fascist principle that mirrors Bragen's own, the social-Darwinist that ...

On 'The Mind Robber'.  A regurgitation of something originally buried in the middle of an old post.

Just one of the best things ever, this story is a gloriously trippy metafictional journey into Doctor Who's own status as a text.

'Robber' picks up the Troughton era handbook for writers, stamps on it, scrawls insulting and anarchistic slogans upon its pages, rips it up and sets fire to the pieces. There is no isolated base, no croaky computer, no catalgue of disposable characters who are laser-beamed to death, no unstable authority figure, no creeping infiltration, no standard fight sequence for Jamie, no scene where someone goes into a bonkers tirade and storms out of a control centre... instead we have a deeply trippy ride through sheer weirdness; a totally unpredictable variation of content, style and pace from episode to episode; an intelligently created elllision of symbolism and literalism; a classic surreal quest narrative drawing on Wizard of Oz and Alice in Wonderland yet beholden to neither.

The Doctor and his friends leave their universe and enter a non-spatial, non-temporal buffer zone... and this buffer zone is a world of fiction. An empty nothingness until imagination works ...

Time Can Be Rewritten 8: The Two Doctors

It's February 16, 1985, which is, if we are being honest, yet another odd time for it to be on the road from June of 1969 to January of 1970, but hey, there was still an awful lot of acid going around in 1969, and who are we to question it. Perhaps Doctor Who just nipped off to Woodstock and lost track of things like everyone else. We'll be here again later, so we may as well skip the music and news and get on to the meat of things, namely the latest adventure of Patrick Troughton, a story called The Two Doctors.

Starting off, it's shocking how much has changed in this six month gap between seasons six and seven. I mean, look at the new opening credits. The starfield opening is certainly lush, and it's hard to imagine how it was done with 1970s theme music, but what the heck is with this awful theme music? This isn't going to stay around for the whole decade, is it? Still, things pick up immediately after. And you ...

It's October of 2005. This means, in practice, that we're between the Christopher Eccleston and David Tennant years. We've already talked about this time period a bit with The Time Travelers, so I'll just refer you there for the general time, but suffice it to say that these are the dying embers of the BBC Books line, coming out after the series has conclusively moved on to other things.

What are we doing here? I don't just mean reading BBC Books from a zombie phase when the line had ceased to have any possible relevance - after all, The Time Travelers firmly established that there was gold in the dying days of BBC Books. I mean doing a Second Doctor story written nearly 20 years after Troughton's death and set after The War Games.

Well, see, it turns out that for plot related reasons, some 1980s reunion stories that featured Patrick Troughton (and to a lesser extent a 1973 one) opened up some seemingly massive continuity errors, mostly in the form of having Troughton's Doctor ...

Tied To One Planet (The War Games)

It's April 19, 1969. Desmond Dekker and the Aces are at number one with "The Israelites," the first reggae song to hit number one in the UK. One week later The Beatles take number one with "Get Back," their second to last number one single in the UK. It stays at number one for six weeks. Also in the charts over this time are The Who, Fleetwood Mac, Herman's Hermits, Dean Martin, Frank Sinatra, The Isley Brothers, Simon and Garfunkel, Tom Jones, and The Fifth Dimension. Of these luminaries, it is of course Tommy Roe who unseats The Beatles with "Dizzy," before he himself is unseated by "The Ballad of John and Yoko," the last time The Beatles ever hit number one. This happens the same week that episode nine of The War Games airs, and remains through the rest of Patrick Troughton's tenure as the Doctor.

While in news of reality, British troops arrive in Northern Ireland to provide support for the Royal Ulster Constabulary, Robin Knox-Johnston completes a solo circumnavigation, and Charles de Gaulle steps down. In the US, the ...

You Were Expecting Someone Else 4 (TV Comic)

It's been a while since we've been over on this end of the Doctor Who pool, and with the Troughton era coming to an end imminently, it seemed like a good time to pop back over and look. Especially because last time we were looking at the World Distributors annuals, and this time we're looking at the Polystyle TV Comics strips.

What's funny, though, is that despite being a completely different company and publication, it's tough to make too much out of the differences between the two sets of comics. This might not seem surprising given that they are both telling Doctor Who stories, and thus presumably have some unifying influence. Except that both are so wildly different from the television series that it ends up being mildly surprising to watch them end up more or less on the same planet given how far afield they are from the target.

And yet somehow the comics end up with an odd consistency to them. It's tempting to allude to some vague sense of a proper order of things in Doctor Who here - the occasional and uncanny sense we've had before that this ship is ...