It's April 27, 1968. Louis Armstrong is declaring how wonderful the world is, and is at #1 doing it. He continues proclaiming this for four weeks, before being unseated by one of the great anthems of pedophilia, Union Gap's "Young Girl." What a wonderful world indeed. So wonderful that nothing too terrible happens during these six weeks - just your usual nuclear tests, Vietnam war protests, deadly tornadoes, nuclear submarine sinkings, and Manchester United winning the European Cup. This last one I actually quite like, as a Manchester United fan, but I'd be lying if I said it was a hugely relevant point. Oh, and the May 1968 events in Paris. But those are for Friday.

While on television.... Hooboy. This may be the most misunderstood story by Doctor Who fandom I've yet covered. I commented to the endlessly brilliant Anna of the lovely blog A Random String of Bits last night that The Wheel in Space has what are possibly the two least likely cowriters ...

It's March 16, 1968, and Israeli novelty blues are still at the top of the charts. It is replaced by Dave Dee, Dozy, Beaky, Mick, and Tich with "The Legend of Xanadu," which sits oddly on the line between novelty and love song. In week three The Beatles ride in to save us with Lady Madonna, and in week five it's Cliff Richard. Honestly, I'm at a loss - this is not music I'm terribly familiar with. Cliff Richard appears to veer in his career from young rock guy to evangelical Christian. I see lower in the charts things like 1910 Fruitgum Company, which I have never heard of. I look at the cover and think "Ooh, that looks like a nice bit of psychedelia." And it turns ... 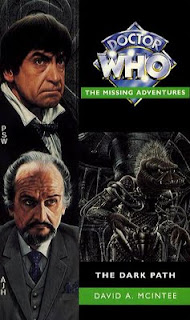 It's March of 1997. Depending on the week, either No Doubt is at number one with "Don't Speak," or the Spice Girls are with "Mama." Other options in the top ten include the Backstreet Boys, Boyzone, R Kelly, Ant and Dec, Bush, and the Bee Gees. If you think one of those things is not like the others, I certainly don't disagree.

You're hopefully, by this point, getting enough of a sense of the general shape of the 1989-2005 period of Doctor Who that "March of 1997" already gives you some clues. If not, what we've got here is the second to last month of Virgin Books before they lost the license to BBC Books. In this period, Virgin, facing their own end and with little to gain or lose, basically proceeded to cut loose with some of the best and most challenging books of their line, but all of this was frankly dampened by the kind of funereal atmosphere. Not everyone had loved the Virgin line, but it had some strong admirers who were crushed to see it go. The prospect of the BBC starting up an in-house line based on the TV Movie ...

It's February 3, 1968. The Love Affair are at number one with "Everlasting Love," a piece of production line pop given a reasonably psychedelic spin in album art. It's unseated by Manfred Mann covering Dylan, who are in turn unseated by Esther and Abi Ofarim's "Cinderella Rockafella" a novelty blues song by an Israeli double act. (Look, you have to get used to these things. Eventually I'm going to have to talk about how "Do the Bartman" hits number one in between KLF and The Clash, and I'm going to have to do it with a straight face, so if you can't deal with Israeli novelty blues, we're in trouble.)

As 1968 progresses, it becomes increasingly hard to read events outside of a larger narrative. When we see three college students killed when police break up a civil rights rally at an all-white bowling alley in South Carolina, or ...

It's December 23, 1967. The Beatles are at number one with "Hello Goodbye." Also at number three with the Magical Mystery Tour EP. They'll hold it for five weeks, which is good, because the rest of the top ten for those weeks leaves more than a little to be desired. At week six, the bottom falls out and Georgie Fame takes over with the Ballad of Bonnie and Clyde.

In terms of news, we have the origin of the term "black hole," which will be a term with surprisingly large impact on the series. Prime Minister Wilson endorses the "I'm Backing Britain" campaign asking people to work an extra half hour without pay, which ends up being a complete turkey. The Prague Spring gets underway, which is a bit unusual given that it's January. And the Vietnam War keeps it up.

But look, the real news is this. Doctor Who airs The Enemy of the World. And I am here ...

Pop Between Realities, Home in Time for Tea 7 (The Prisoner, You Only Live Twice) 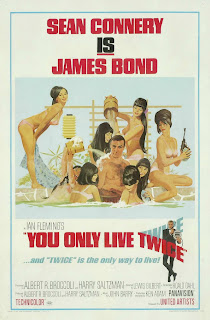 Pop Between Realities, Home in Time for Tea is a recurring feature in which things that are not Doctor Who are looked at in terms of their relation to Doctor Who. Today we look at two classics of British spy fiction from 1967, the James Bond film You Only Live Twice and the ITV television series The Prisoner.

Well this is certainly a bit of an awkward pairing. I mean, never before has "Well, do both of the espionage things you need to do in one entry" seemed like quite so staggering a task. They may both feature secret agents, be British, and be from 1967, but that's about where the similarities between James Bond in You Only Live Twice and The Prisoner end.

Let's start with Bond, since that's the one that's kind of long overdue in this blog. The thing to note regarding You Only Live Twice is that it is a movie that expects nothing out of its audience. It would be easy to describe this as having a sort of cynical contempt for its audience, but it's more complex than that. It is not as though the movie thinks little of its ...

I Never Had a Life Like That (The Ice Warriors)

Just a quick note that, in preparation for going on vacation for ten days in June, starting now and continuing for a few weeks I'm working on building a backlog of posts and scheduling them to update automatically. This won't affect the posting schedule at all - new content should be up on Mondays, Wednesdays, and Fridays for the foreseeable future. However, it means that the sense of the present in the entries is steadily going to drift. Monday's entry on The Enemy of the World, for instance, is extremely likely to be written before The Almost People airs. So if a post comes along that fails to make a spectacularly obvious point comparing the most recent episode to whatever episode I'm looking at, it's probably because I wrote it a week before you read it.

It's November 11, 1967. The Foundations, a British Motown group, are at number one, because these things happen in the UK charts. Two weeks later it gets unseated ...

My Guru, If You Will (The Abominable Snowmen)

It's September 30, 1967. Mr. Humperdinck continues to rule over the musical Landscape untroubled by the psychedelic whippersnappers in the rest of the top ten (of which there are at least three). He continues this for two weeks, at which point he is abruptly unseated by the Bee Gees with "Massachusetts," with The Move's "Flowers in the Rain" immediately behind. For the next four weeks, it's just a question of which bits of psychedelia fail to unseat the Bee Gees, who are currently beautifully exploiting the popularity of psychedelia to provide a safe and fun-seeming alternative with their almost-but-not-quite psychedelic lettering on their single.

"Flowers in the Rain" and "Massachusetts" are also, interestingly, the first two songs played on BBC Radio 1, one of a Collection of four new radio stations that comprised the BBC's long overdue concession to the existence of rock and pop music on the part of the BBC and the death knell of the pirate radio stations. You also, during this story, have ...