The Bloody Pantomime In Which You Have Enslaved Yourselves (Lemmings) 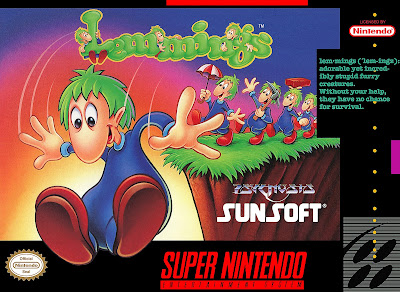 I don't know about the SNES version, but in the original you could turn a blocker back into a normal lemming by digging along under his feet. He'd then fall and become a walker again.

What always struck me was that the land you glimpsed through the trapdoor they fell out of looked so idyllic; what did they hope to achieve by throwing themselves into this terrible new world full of danger and meat grinders? Could the hand of Walt Disney be pushing them through the trapdoor too?

It's surprisingly not bad. Works much better than SimCity. They use the X and Y buttons to let you cycle through the Lemming modifications, which means you don't have to do much elaborate scrolling.

It's possible that trick works on the SNES version; honestly I'd never heard it before now. Actually, I'll go check now.

I seem to remember (and this is rusty childhood memories of the Amiga) that you use a digger to dig down half a lemming-height and then turn them into a basher to cut away the ground beneath the blocker's feet so there's no ground remaining at all where they're standing, they then turn into a normal lemming. I don't recall any levels requiring the use of a blocker AND needing 100% so maybe it wasn't a deliberate thing across all platforms.

In this age of phone apps I'm surprised Lemmings hasn't made a big comeback.

Incidentally: glad to see the SNES project back. How are you choosing the games?

(Can't wait for him to tackle Chrono Trigger.)

(Also: my friend actually owns a Super Scope, but I don't think she ever uses it...)

This game was my first video game addiction. I had the Amiga version. So many memories.

A slightly less finicky method is to start building a little bridge and turn that guy into a blocker after a couple of steps. Then a basher can free him without affecting the initial landscape. Or one of those diagonal guys if the bridge is long enough.

Rather more cruel are the levels without any or enough digging / bashing dudes where you have to explode a lemm to clear a bit of space.

Also notable: in Lemmings 2 explodey-lemms don't die. The whole idea was changed so that the number you save is the number that goes forward (a la Pikmin), so they made it so that you can get a perfect game. Also the "Shadow" levels IIRC you are trying to reach a TARDIS. That they put the TARDIS in the spooky shadow levels and not the space levels says something about how canny the folks behind the games were.

Count me as another who had no idea this even had a SNES port. But I was addicted to it on PC. Never any good at it, but addicted.

How on earth do you play Lemmings without a mouse, though?

"Tricky 19" was a catchphrase in my house, as that is where my entire family got stuck!

I always enjoyed setting all the lemmings to nuke as they marched into the end goal (once the target had been achieved, of course). Would they reach the gate and thus live, or explode and die?

But now I think... did those lemmings truly live? Or did they continue to tick down, and explode in their new home in a graphic spray of pixels and "oh no's"

Don't know about Lemmings, but I had the point-and-click adventure Discworld Noir for the Playstation (having learnt from the previous Discworld games that our PC of the time couldn't handle anything beyond the original Prince of Persia). I read a blog post by the designer a while back where he apologised to everyone who'd tried to play it with a control pad, but I didn't find it that difficult ... except for that one bit where you're supposed to wave the pointer around vaguely looking for the patch of wall you can interact with.

And now that I've brought up Discworld, the main thing I know about Lemmings is that Sir Terry found it such a time sink that he not only removed it from his hard drive, he wiped the disks to be sure.

I remember Civilization was a huge pain on the SNES without a mouse, too. I'd gotten so used to playing it on PC, that when I finally booted up a copy of the SNES port on an emulator, it just made me upset.

Just for clarity, and cos I am a hopeless pedant, they stated on QI the Lemmings suicide myth goes back to at least 1908:

And here is a reference for a 1929 encyclopedia mention