This is an edited and tweaked version of something I wrote for the old site.


If 'The Deadly Assassin' has a central thesis, it might be this: power is no guaranteur of responsibility. Or even sensibleness. This tale shows us beings like us. Godlike in their technology, they are also childlike in their small-mindedness.

In 'The Deadly Assassin', the Time Lords are senile gerontocrats living on ossified priviledge. They natter, bumble and scheme. The less shot-away amongst them spend their time snapping at each other with haughty contempt or scheming over appearances and expediency. Robert Holmes deliberately strips Power of its outward signs of dignity and virtue and superiority.

They are locked in a rigid class system. They fail to understand their own technology, their own power, their own myths. They "adjust the truth" to suit their agendas. Their outwardly civilised society begins to crumble into anarchy when two of their renegades return and start fighting out their neuroses. The sit on a massive computer lake of information in which nestles a surreal and nightmarish dreamscape filled with elemental terrors. Their Panopticon (literally: place where all can be seen) hides secrets. The biggest secret is a singularity, a piece of cosmic anarchy that they've slaved to their technology and then forgotten about. This is a picture of denial. Like the lies that are "good for public morale" overlaying the sordid truth, their society pretends to be controlled and calm but rests on hidden and deadly knowledge.

As a satire, it isn't subtle. Robert Holmes chucks in random signifiers from various power elites of Western culture: British public schools, Washington DC, the Vatican, Oxbridge, etc. Gallifrey seems to be his scathing picture of an oligarchial and decadent world, run by liars or killers or the senile, reported by snobbish and fautous twitterers content to reel off the official-view of the upper echelons. Trials are manipulated for convenience. Elections are devoid of real democracy. Behind the specious words about "our traditions of fairness and justice", the system's Swiss Guard-style private police use torture and assumption. Hildred is a brutal bungler; Spandrell's intelligence and independence only highlights how unusual he is in his world. 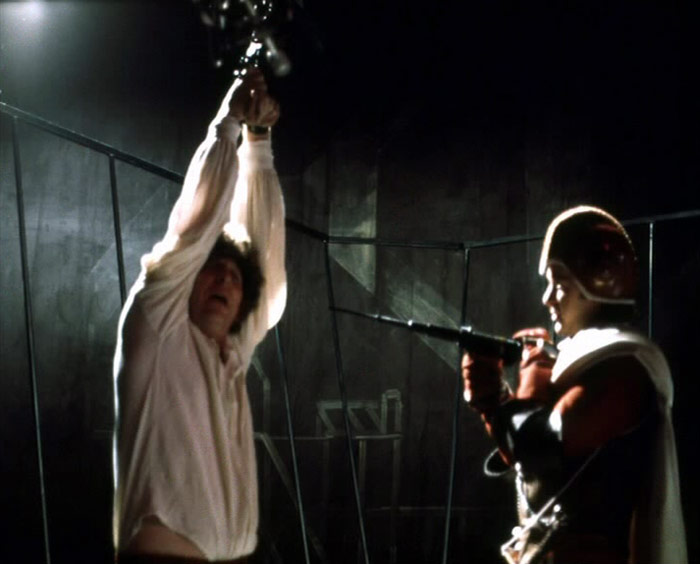 "Aren't you worried Wikileaks might find out about this?"
Most outragously, the story seems to riff on the Kennedy assassination. 'The Deadly Assassin' isn't an allegory of Dealey Plaza, but it does play with our collective (often confabulated) consciousness of that political slaying. The Doctor is a "patsy", his alleged weapon has misaligned scopes, the real killer is from within the top circle of power, the truth is changed by Borusa's cover-up.

We even have the cheekily named Celestial Intervention Agency, of which the Doctor is assumed to be a member... and, indeed, the Doctor has been involved in Time Lord-sanctioned interventions. Is he a C.I.A. agent? This one throwaway reference muddies the waters (or rather stirs waters that are already muddy). The Time Lords speak of their policy of neutral observation of the universe (Gallifrey is the place where all can be seen) and of their strict non-interventionism... but, like the Western 'democracies' that speak of international law and then organise coups d'etat in places where they feel their interests are threatened, they can always ask their "C.I.A." to intervene on the quiet.

As ever with Holmes, the language is amazing. This story gave the Who-myth so many words and phrases: "High Council", "Matrix", "Rassilon", "Eye of Harmony", "Castellan", "APC net", "Celestial Intervention Agency", "artron energy", "shabogan", etc. etc. And we have Borusa's aloof and suave variety of verbal dexterity. I needn't quote, you know what I'm talking about.

It's heady stuff. It's so mythic that it has firmly buried itself into the subconscious of the whole show, providing Who with its own personal origin-legend. It's also politically complex, witty, cynical, surreal. For all its flaws, you can't help but marvel at it. Apart from everything else, there are those astonishing costumes! Of course, subsequent return trips to Gallifery sullied its reputation... but that isn't Bob Holmes' fault. After this, Gallifrey started looking like every other high-tech alien world, lit and furnished like a Habitat showroom.

RTD's attempts turned Gallifrey into Hogwarts with a bog-standard Bespin-style citadel, and then into Coruscant. The fact that the costumes are all wrong in the new series - the ceremonial circle-based shoulder-display thingies worn by guards! - is a sign of a wider failure to grasp what the Time Lords are supposed to be. Gallifrey, should it ever be seen again, needs to be like the place in 'The Deadly Assassin': a dark, gothic labyrinth of high politics, murky motives, unaccountable power, shadows and oligarchy and cover stories... and, crucially, decadent idiocy. Not a backdrop for an ex-Bond doing a Voldemort.

good Today in this document we will head out through the see this here Apps menu for future work. Also if you got any difficulty in installing this App, nice.