“The picture you see”: Man of the People 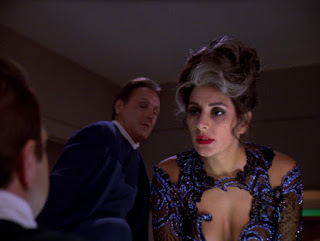 Oh good, Deanna Troi again. Well, at least we know what we're in for.

But let's be fair here. Deanna Troi is a fine character (regardless of what the creative team thinks) and Marina Sirtis is a fine actor, it's just the combination of the two that seems to cause problems. In fact, this is probably the episode that proves this unequivocally beyond the shadow of a doubt. More to the point, this is an episode that probably shouldn't exist, not because it's particularly ethically reprehensible (well, it kinda is that a bit too) but because it's plainly a stopgap story: “Relics” was supposed to go in this filming block, but James Doohan's unavailability forced the team to push that episode to the following week. This necessitated a brand new script *right goddamn now*, with the brief given to incoming supervising producer Frank Abatemarco. It's also another “Let's Do” story, this time for The Picture of Dorian Grey.

(By this point in Star Trek: The Next Generation, Jeri Taylor is effectively the sole showrunner, with Michael Piller temporarily stepping back a bit to spend more time on Star Trek: Deep Space Nine to help it get off the ground and oversee the franchise more broadly. Abatemarco steps in here to ease some of Piller's burden until things stabilize by mid season.)

So this is an episode quite frankly nobody has or should have any expectations for. It's a “Let's Do” story, stars a character nobody seems to have a good handle on, was thrown together at the last minute and given to a guy who was brand new to the show, effectively throwing him right into the deep end. Brannon Braga sums up the situation pretty well:

“I would have done it differently. I would have made it darker and much more a story about Troi's dark descent from the psychological point of view. A scene we all wanted to see was Troi giving therapy to a young ensign – but make it twice as long and twice as dark as the one that was filmed, and make it much more of a Hannibal Lecter thing. This was a case where Frank Abatemarco saw a different show. He was focusing in on the show as a Prime Directive issue and looking at the character of the guy who was using Troi as a receptacle. To me, that was the utterly incorrect instinct. After six years, who cares about Prime Directive issues? It's a Star Trek cliché. It should have been all about Troi and he would have been the catalyst in two brief scenes. The first three acts were still fun. It was enjoyable to see Troi acting strange and dressing in skimpy outfits. There was some argument in the structuring sessions. Ultimately, Frank was the writer and he was given the opportunity to do it the way he wanted to do it, and it suffered because he was new to the show.”

And that's pretty much my critique: Of course it's bad. There was very little chance it could have been anything other than bad. There's not much more to say than that. Last-ditch Hail Mary efforts are nothing new. Deanna Troi getting screwed over is nothing new.

So I'd like to use this opportunity to talk a little bit more about the unique Problem of Deanna as it were. “Man of the People” is basically the last traditional “Troi goes crazy” episode, and probably the definitive one, and that itself tells us some things. If you'll recall, the impetus for doing this kind of story in the first place is the not altogether unfounded concern that Marina Sirtis' considerable acting chops were being squandered on a character with some crippling conceptual flaws that render her more or less ineffectual. I personally think there's a robust redemptive reading to be done of Deanna Troi, but that's for another time-Right now the point is that this is what the creative team has traditionally thought. From this, their solution up to now has been to write stories where Troi gets possessed or otherwise compromised so Marina Sirtis can show the other sides of her acting range: Aside from this, we've seen “The Survivors”, “Clues” and “Power Play”, just to name some of the most obvious ones off the top of my head.

“Man of the People” isn't the best one of these (that would be “Power Play”), but it does serve as a kind of limit case for it. The problem with these kinds of stories is, ironically enough, the very underlying assumption they're predicated on. Although things are better under the current creative team and while everyone more or less respects Marina Sirtis (and rightly so), there is a history of the writers on this show writing for her first and foremost because they don't respect Deanna Troi. Because yes, Marina Sirtis *can* do all this crazy stuff and do it really well, but it always seems to come at the expense of her character. And yes, she was miscast and yes that's certainly not her fault but...Fuck's sake, it's been six years! Has there been nobody who's stopped petulantly throwing a tantrum about Deanna long enough to find a way to make her work in the here and now?

It's not like writing for Marina Sirtis' Deanna Troi was some impossible paradox of a task: Michael Jan Friedman figured it out from the beginning of his tenure, and DC's Star Trek: The Next Generation had it pegged even before Friedman came aboard all the way back in the first season! Even Brannon Braga admitted “Man of the People” should have been more about Deanna, and Marina herself even explains how her performance here came out of her understanding of who Deanna was as a person:

“I played it like these were underlying parts of Troi that she controlled or managed to suppress. And just looking in the mirror was all I needed to change. When I look in the mirror and see Troi, it's a very soft and gentle look. In the scene in Ten Forward where my hair was up, I saw Anne Bancroft in the mirror. I saw Mrs. Robinson and that's what I played. Basically, a lot of the performance is governed by the way that one looks. Some actors say they put the shoes for the characters on first and figure out the walk. I look in the mirror and play whatever I see in the mirror – especially when it's a make-up thing like in 'Man of the People,' where the old person was a witch and that's who was in the mirror, so I played a witch.”

And as brilliant as that performance may be and as savvy an actor as this reveals Marina Sirtis to be (for anyone who still has lingering doubts even after all this time), what it shows us most of all is the overwhelming need for something to change about how Deanna Troi as a character is written for TV in the fall of 1992. There is a way for Marina Sirtis' Deanna Troi to fully live up to her potential (and she does have potential). But the actor and the character truly need to be reunited for this to work, because it's really not fair to either of them any other way. They're both too good for this. They're both capable and deserving of so much more. Share on Twitter Share on Facebook

I think this episode's fascinating. Not half because something so obviously horrible actually got made, but because it's pretty much exactly the same plot as The Host (ambassador decides only he can do a difficult peace negotiation and uses that to steal the bodily autonomy of a member of the crew in a creepy and rapey way), only the difference is in The Host, the entire crew (with Troi as ringleader) team up to help Dr Crusher rape Riker, but in Man of the People, Picard goes and has the ambassador murdered. Double standards indeed! The only wriggle room is to pretend there's a missing scene in The Host where Riker tells the crew that it's his wish that Odan get to use his body to sleep with as many people as possible.

(Actually in the cold light of day, aka 2015, I've found a lot of TNG to be really, really morally dubious on rewatch. It makes me wonder what 'progressive' shows of today we'll look back on in 25 years time, shaking our head and going "blimey!")

Okay. My new headcanon is that when they approached Riker to be a host, he was like, "Okay, but only on condition that you get my body laid before you give it back."

I can see now when I watch TNG what I could not see as a kid, and that is that Sirtis was poorly served as an actor. Thanks for the bit of insight into her process.