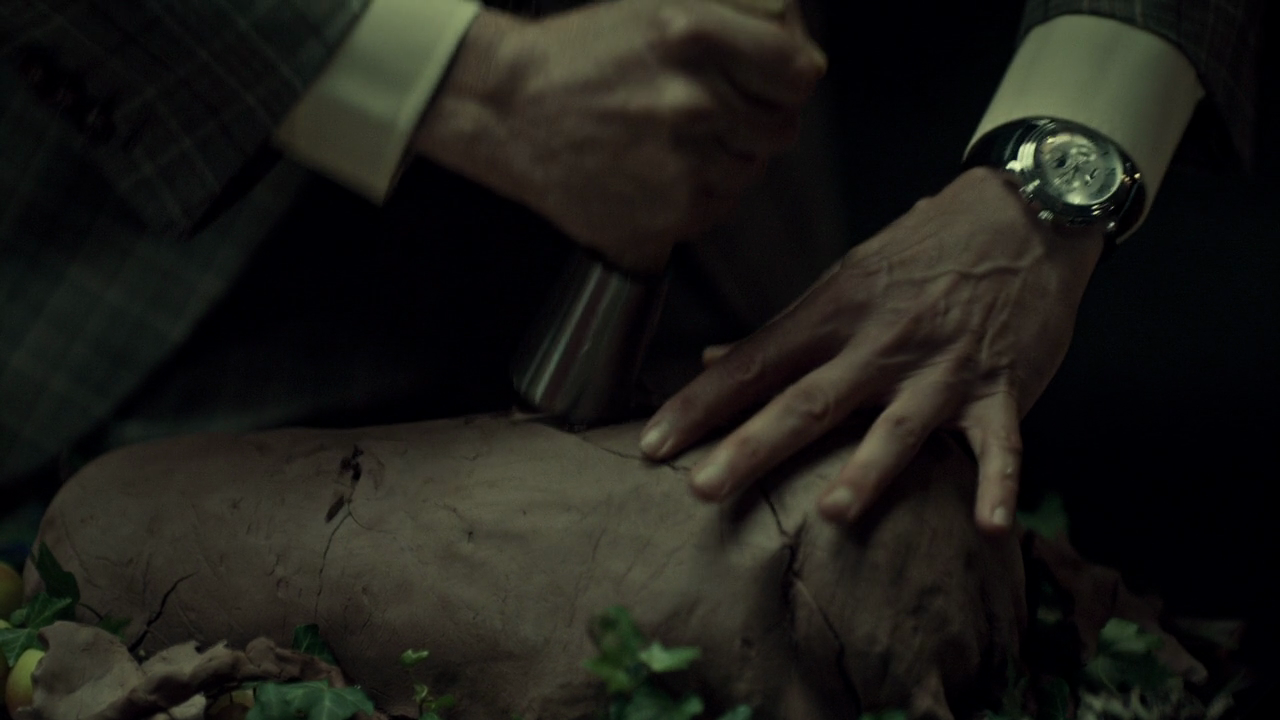 FUTAMONO: A soup dish served in a lidded pot. Most obviously a reference to the final scene, in which Jack discovers Miriam in a covered hole.

WILL GRAHAM: You're moving smoothly and slowly, Jack, carrying your concentration like a brimming cup.

Another case of using one of Thomas Harris’s characteristically vivid similes in an unexpected context - originally it is Francis Dolarhyde who thusly carries his concentration as he sets up to peruse home movies and decide on his next victim.

JACK CRAWFORD: And then you told him to kill Hannibal Lecter.

WILL GRAHAM: Nothing I said made that happen, Jack. It just happened.

JACK CRAWFORD: Don't seem too broken up about it.

WILL GRAHAM: There is a common emotion we all recognize and have not yet named. The happy anticipation of being able to feel contempt.

Two Thomas Harris lines in rapid succession. This one comes from Hannibal, where the emotion play across the face of Margot Verger as she’s preparing to introduce Clarice to her brother. Its poetry comes from the fact that we do not, in fact, quite recognize the emotion, as the act of recognizing an emotion is in a large part coextensive with the act of naming it. The emotion does, however, cohere - once it is named, even in the nine-word formulation offered by Harris, it immediately becomes possible to recognize it, which in turn perpetuates the experience of it.

JACK CRAWFORD: What does he do, Will?

WILL GRAHAM: What does he do? What is the first and principal thing he does? What need does he serve by killing?

And the hat trick; Will’s question is the same one Hannibal asks of Clarice regarding Buffalo Bill in Silence of the Lambs. I can’t see anything else in the scene that looks distinctively Harrisesque, so doubt Fuller got a Hannibal Rising line in as well, but then again, that’d be the book that doesn’t stand out.

WILL GRAHAM: The Ripper kills in sounders of three or four, in quick order. Do you know why? I know why.

WILL GRAHAM: Because if he waits too long, then the meat spoils.

WILL GRAHAM: Not like Garret Jacob Hobbs. Hobbs ate his victims to honor them. The Ripper eats his victims because they're no better to him than pigs.

I was tempted to make this entire post consist of an annotation regarding the pigs comparison, but it would amount to a rewrite of my previous essays “Capitalist Pig” and “Capitalist Pig 2: This Time It’s About Cancer.”

HANNIBAL: A remarkably-lean organ, the heart. Funny how we revere and romanticize a simple pump. Merely a muscle. Yet such a potent symbol of life and the things that make us human, good and bad. Love and ache.

ALANA BLOOM: All of them skewered.

HANNIBAL: It's a thematic dish. My heart certainly feels skewered.

ALANA BLOOM: You have the scars to prove it.

HANNIBAL: I feel as though that noose were still around my neck. It's strange to have nightmares. Never used to.

And so Alanna’s character enters its second and generally more distressing phase as she transfers her emotional intimacy with Will to Hannibal. This is not poorly set up per se - there’s a line in the first season in which they wonder why it is they never had an affair. But it’s ugly in ways we’ll see soon enough. All of which said, there is no particular reason to think that Hannibal is lying here, and indeed it’s far less interesting to assume that he is.

HANNIBAL: I’m metabolizing the experience by composing a new piece of music.

Alana’s question exposes one of the fundamental dualisms of Hannibal. The choice of instruments is drawn from Hannibal, where Lecter purchases a harpsichord and a theremin at auction, but the meaning is richly symbolic. The harpsichord is of course the classical choice, positioning Hannibal as an heir to the European aristocratic tradition; it’s an obvious, even stereotypical choice for him. The interesting one is the theremin, the first electronic instrument of note. Invented in 1920, it is an unmistakable product of modernism, and Hannibal’s attachment to it is part of the larger pattern that Jack (Graham, not Crawford) has noted of Hannibal being a monster built out of a collage of 20th century atrocity. Between this and pigs, the episode is really laying out the thematic undertones of Hannibal’s aesthetic. 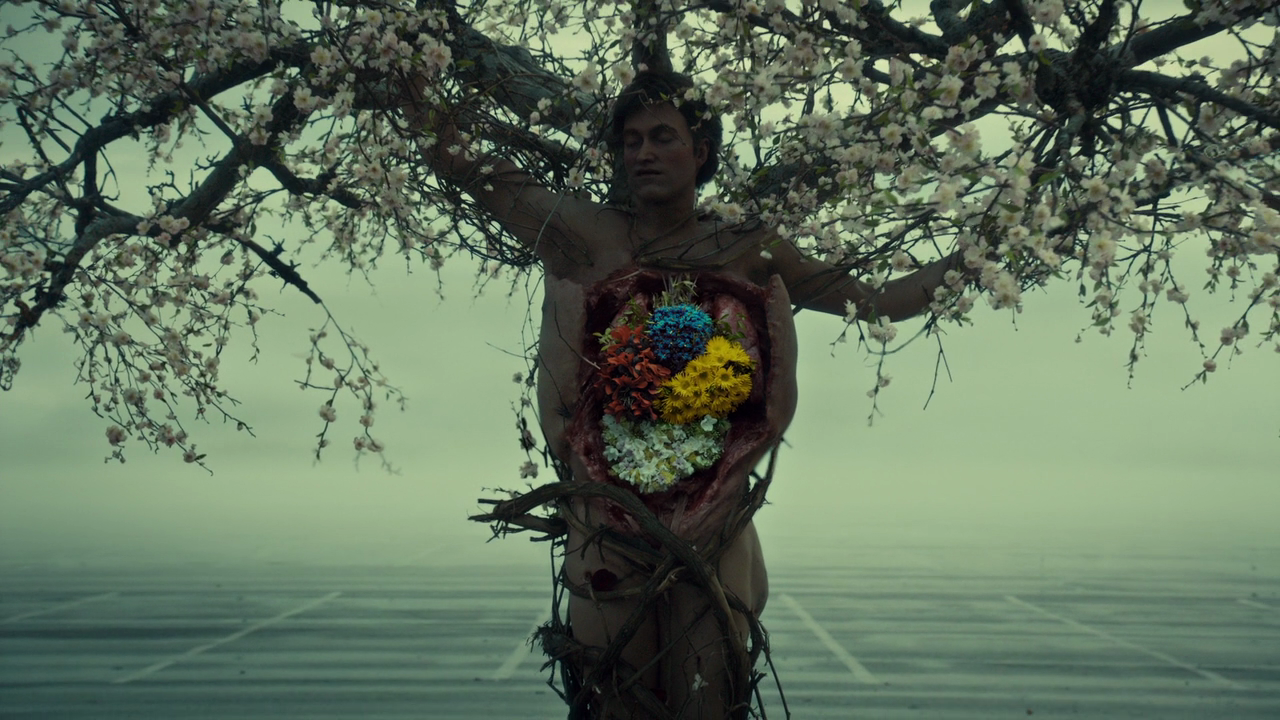 Hannibal is a visionary artist, to be sure, but this does not mean he operates outside the context of his contemporaries - here the work of Eldon Stammets and Katherine Pimms emerges as a clear influence.

JACK CRAWFORD: The time he devotes to what he does. He takes real pride. Belladonna for the heart, a chain of white oleander for the intestines, ragwort for the liver.

JIMMY PRICE: The flowers are all poisonous.

JACK CRAWFORD: This is judgment. Ripper believes his victim was toxic. A poisonous man.

Jack’ is at last trying on Will’s hypothesis, imagining what would be the case if Hannibal were the Ripper. The approach yields immediate results - Jack has never been this adept at interpreting a Ripper tableau.

JACK CRAWFORD: Then you're aware what Will is accusing Hannibal Lecter of.

DR. CHILTON: Oh, yes. I am aware. I am intrigued. And I am grateful that I have trouble digesting animal proteins, as the last meals I've shared with Hannibal Lecter have been salads.

JACK CRAWFORD: You believe it?

DR. CHILTON: Hannibal once served me tongue and made a joke about eating mine. It's hard not to at least consider it.

JACK CRAWFORD: Will is delusional. And wants to reinforce his delusion. With you. With me. With Abel Gideon.

JACK CRAWFORD: No, it doesn't. Chesapeake Ripper is murdering again and Hannibal Lecter is throwing a dinner party.

DR. CHILTON: Jack, he fits the profile. He's attracted to medical and psychological fields because they offer power over man. Cannibalism is an act of dominance.

It’s a small grace note that Chilton, when confronted with the evidence, is one of the first to see the truth along with Jack. This fact does not help him in the slightest, and his response to the information is characteristically selfish and cowardly, focused mainly on his own interactions with Hannibal instead of on anything remotely helpful like what to do.

HANNIBAL: I don't expect you to feel selfloathing or regret or shame. You knew what you were doing and you made your own decisions. Decisions that were under your control.

WILL GRAHAM: You think I'm in control?

HANNIBAL: I think you're more in control now than you've ever been. You found a way to hurt me, Will. I wonder how many more people are going to be hurt by what you do. I'll give Alana Bloom your best.

Hannibal’s final line is a dispiriting move - the closest the show comes to breaking its “no sexual assault” rule in that it weaponizes Hannibal’s seduction of Alana into a tool to hurt Will with. That Hannibal’s treatment of her ends up being cruel and opportunistic is essentially inevitable, but without this line it is possible to believe there is some affection in it and Alana’s role in the plot is not that of mere object. With it, it is difficult not to notice a mildly misogynistic pattern in Hannibal’s actions that is an unnecessary and mildly discordant ugliness.

DR. GIDEON: I’m sure you and Frederick have had many a conversation about my bad behavior. How does he describe me?

DR. CHILTON: A pure sociopath, by the book.

DR. GIDEON: Do you mean your book, Frederick?

DR. GIDEON: I’d just like to point out that the word "sociopath" hasn’t been used by any respectable psychiatrist since 1968.

Not that the show’s more usual term, “psychopath,” is in widespread use these days either, with the preferred term being “antisocial personality disorder” so as to diagnose the condition as opposed to the person. Various differences between the two terms exist, but since neither is a proper medical diagnosis this is mostly in usage - various sites suggest that “sociopath” implies an environmental as opposed to genetic cause, that it refers to people with weak consciences as opposed to no consciences, or that it describes a more volatile and rage-filled actor than the coldly calculating psychopath. Admittedly all three can be argued to apply to Gideon.

DR. GIDEON: Dr. Chilton hired a nurse who’s had experience in mental hospitals, but not as an employee. That nurse attempted to murder Hannibal Lecter and you blame Will Graham. You’ve got the right box, Jack, but you’re looking in the wrong corner.

“Looking in the wrong corner” was previously used by Hannibal in “Trou Normand” to describe Will’s search for a physical explanation for his lost time. It does not appear to come from Thomas Harris, and so is presumably a favored phrase of Steve Lightfoot, who wrote that episode and has a co-write credit on this one. In any case, Gideon has a fairly valid point here. 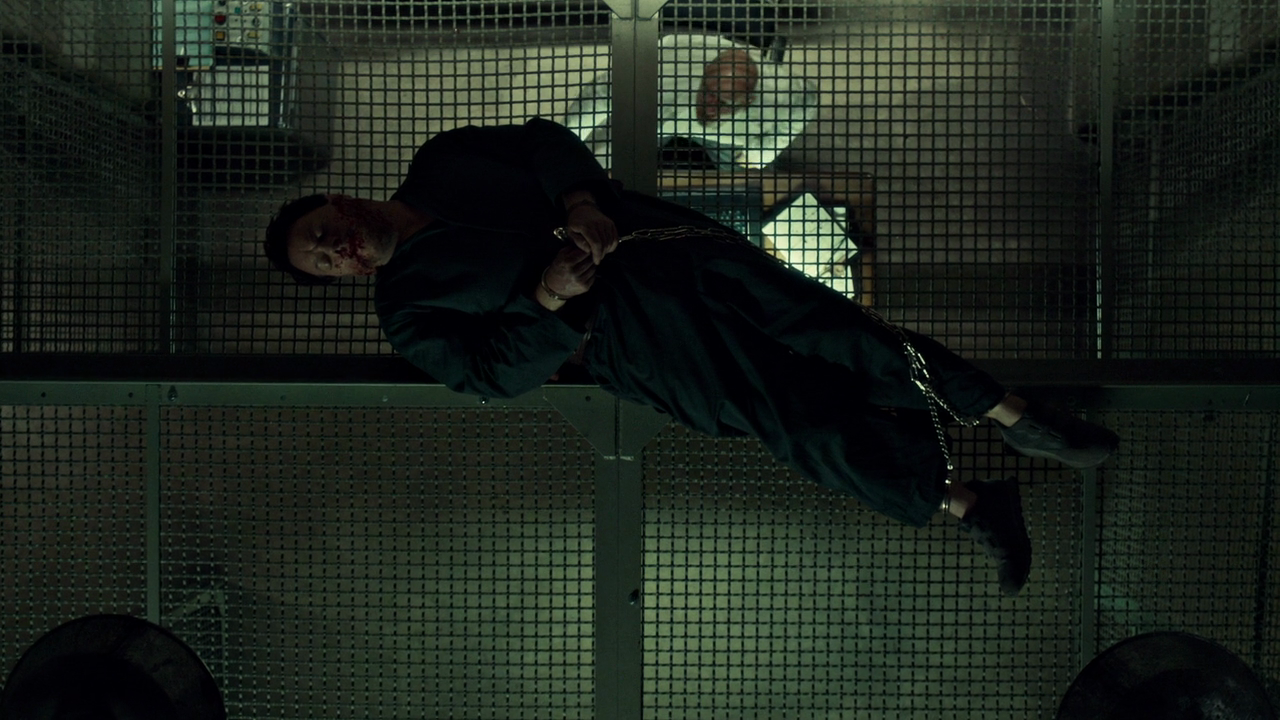 Keeping with the Season One theme of Gideon being used as Hannibal’s means of interpolating Silence of the Lambs imagery, Gideon’s assault visually mirrors Hannibal’s escape towards the end of the film, specifically his dropping of a dead body on top of the elevator (Gideon having already used "wake up on the gurney and kill people" and "escape out of a moving van/ambulance" in previous episodes). 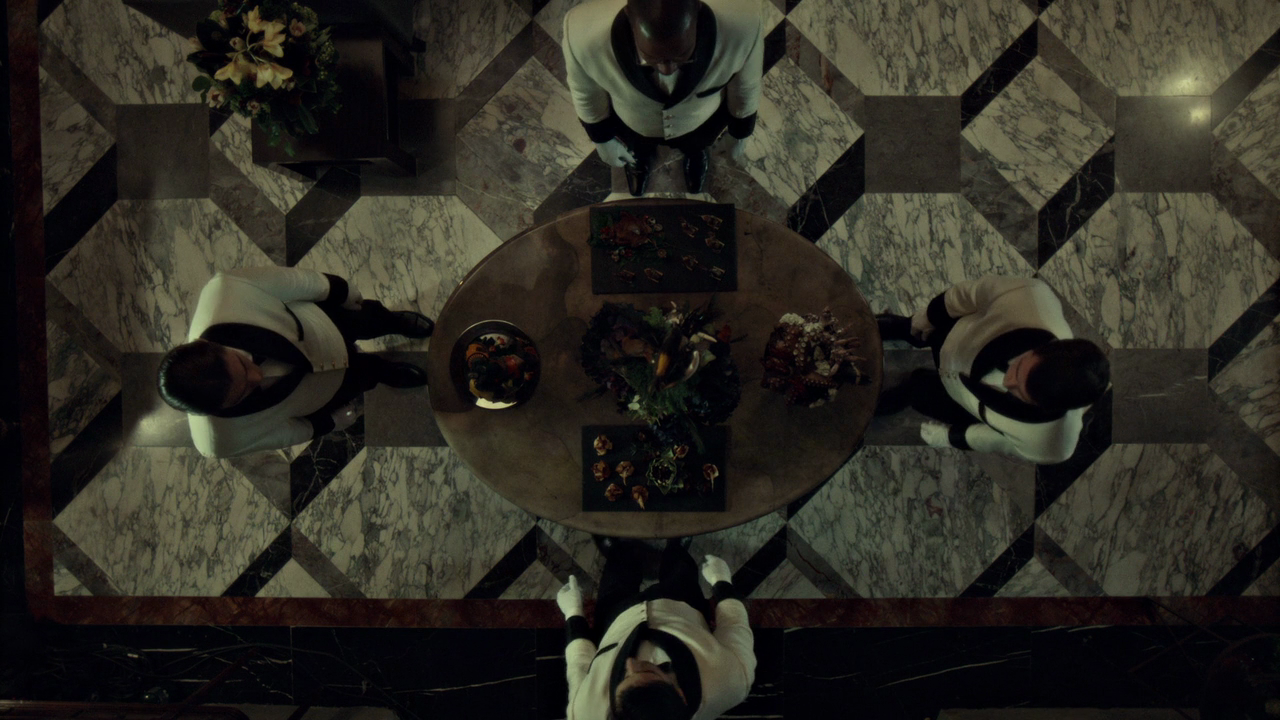 I’ve mentioned Janice Poon - the show’s food designer - in passing before, but as she outdoes herself in this episode between all the bits of the dinner party and the later roast leg it’s worth highlighting her contribution to the show’s aesthetic. Her key techniques are lush colors associated with poison, liberal invocation of trypophobia (the fear of holes), and arrangements that emphasize the anatomical nature of the food. None of which are actually visible in this shot, but hey.

ALANA BLOOM: I was thinking about funerals. And how they often make us want sex.

HANNIBAL: It's one in the eye for death.

ALANA BLOOM: Not that we... not that this was... funeral sex.

HANNIBAL: Of course it was. We both just buried a friend. We buried Will.

ALANA BLOOM: There's something liberating about finally letting him go.

HANNIBAL: Yes, there is. We have a lot of reasons to do this. Not just funeral reasons.

“Not just funeral reasons” is one of the show’s better throwaway lines. But don’t miss Hannibal’s double meaning in acknowledging the liberation of letting Will go.

HANNIBAL: You were determined to know the Chesapeake Ripper, Dr. Gideon. To wear that skin before you die. Now is your opportunity.

DR. GIDEON: Intend me to be my own last meal?

DR. GIDEON: How does one politely refuse a dish in these circumstances?

One of Hannibal’s more conceptually elegant murders, and one that is notably off-type for him, in that it is a piece of performance art with no subsequent tableau. But this is consistent with Gideon’s role to Hannibal, which is not based on rudeness (Gideon is clearly rude, but generally manages to avoid being so to or around Hannibal) but on a sort of aesthetic necessity based on Gideon’s false claim to be the Ripper. Hannibal recognizes that Gideon is not particularly complicit in this, however, and so crafts for Gideon a fate that simultaneously honors him and establishes him as less than Hannibal. (c.f. “it’s only cannibalism if we’re equals.”)

Did you give up on the Tardis books?

I have the first five but I've not received any of the rest of the series up to eleven that I paid for.