The Proverbs of Hell 22/39: Shiizakana 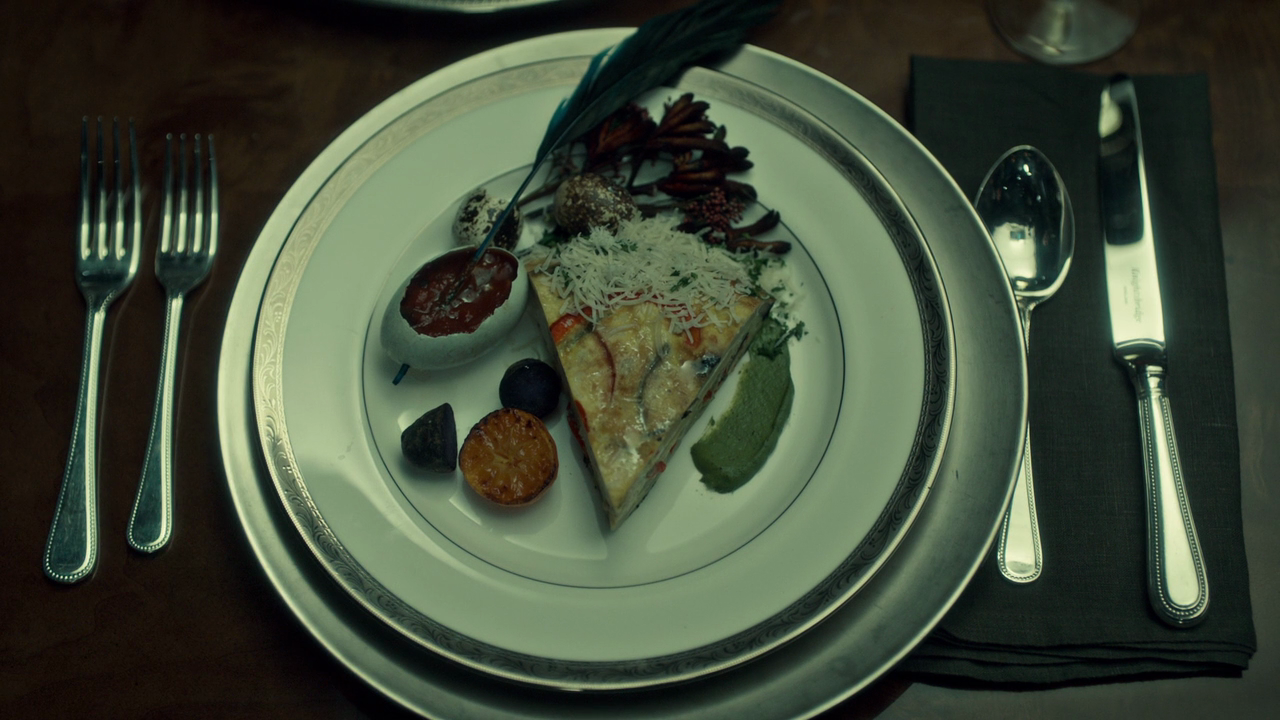 SHIIZAKANA: A hot pot dish, meat-based and the nominal main course. I’m going to go ahead and just call it “no relation” to the contents of the episode, because reading this as somehow forming a culminating centerpiece of the season is just too ridiculous.

HANNIBAL: Why not appeal to my better nature?

WILL GRAHAM: I wasn't aware you had one.

HANNIBAL: No one can be fully aware of another human being unless we love them. By that love we see potential in our beloved. Through that love we allow our beloved to see their potential. Expressing that love, our beloved's potential comes true. I love you, Will.

Given that it also includes Will slowly crushing Hannibal via elaborate rope bondage and the black stag, this dream sequence is firmly the slashiest scene in Hannibal.

HANNIBAL: Memory gives moments immortality. But forgetfulness promotes a healthy mind. It’s good to forget. What are you trying to forget?

For those inclined towards the “Steven Moffat was significantly influenced by Hannibal” school of thought, the similarities between this and “forgetting is the human superpower” is significant. Of course, that was Frank Cottrell Boyce, so the argument runs aground pretty quick. The study going around the popular science press suggesting that forgetfulness correlates with intelligence validates Hannibal pretty significantly. Meanwhile, the idea of forgetting as a cure for doubt is at once poignant and intriguing. 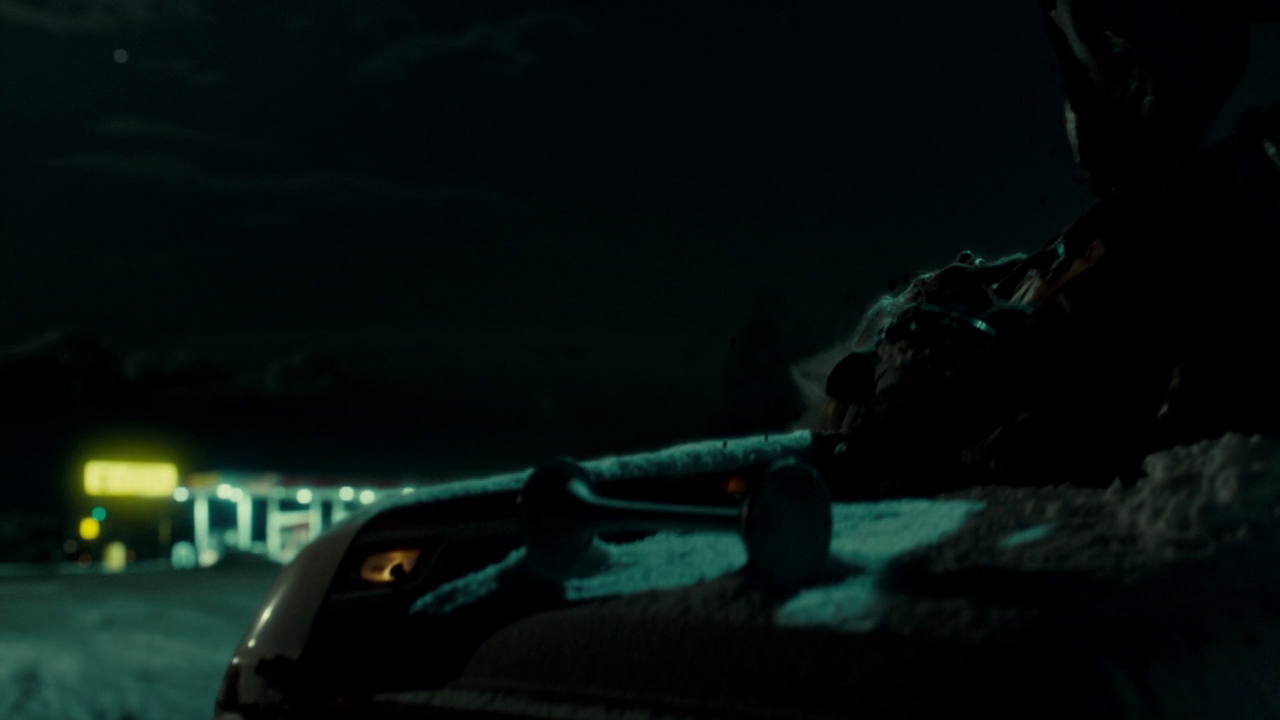 And here we get to where the episode starts to go awry - it’s a sudden and far from welcome return to the killer of the week setup, and more than that a return to the oddity of “Buffet Froid” where the episode reads as Hannibal’s take on a particular genre trope. In this case, as a strange animal slaughters a trucker while the camera pans up to the moon, we’re clearly doing a werewolf story. As a killer of the week it’s a perfectly good second season idea, but it feels like what it is - the killer of the week conceit stretching to its breaking point in ways that are fundamentally just not that compelling within the context of what Hannibal actually does well, namely its delectably oversignified exchanges between and around Hannibal and Will.

WILL GRAHAM: Do you have any regrets?

HANNIBAL: With every choice lies the possibility of regret. However, if I choose not to do something, it's usually for a good reason.

Hannibal’s formulation - only considering the possibility of regretting not doing something - is fascinating. Some of it is context - Hannibal knows even before Will says as much that he’s regretting not killing Clark Ingram last episode. But Hannibal’s megalomania - a character trait he is even more circumspect about than his cannibalism - shines through in his complete disregard for the basic idea that he might regret anything he has done as opposed to merely missing an opportunity.

HANNIBAL: Did you make that decision on the basis of anticipating the regret you would feel taking another life?

HANNIBAL: Anticipating regret commonly results in dubious decisions. You must adapt your behavior to avoid feeling the same way again.

Will’s summation here is an odd collision of the Survivor slogan with Hannibal’s ongoing fascination with transformation, the word “become” gesturing forward to Francis Dolarhyde. In the middle, meanwhile, is the injunction to evolve, a desperate but not entirely unsuccessful attempt to anchor the discussion somewhere in the vicinity of the killer of the week.

HANNIBAL: What did you see?

HANNIBAL: And what does that feel like, Will? Excitement bumping in your chest like a cold medallion?

WILL GRAHAM: I felt a quiet sense of power.

“Quiet sense of power” is a Red Dragon quote, as evidenced by its tightly trochaic footfalls and the carefully balanced tension between the words “quiet” and “power.” Hannibal, meanwhile, is openly telling Will to kill people while simultaneously undermining his efforts to do so.

MARGOT VERGER: I tend to walk out of this building in a similar state. You must be a patient of Dr. Lecter's. Are you famous or are we friendly?

MARGOT VERGER: You look familiar. Either I know you or I know of you.

WILL GRAHAM: I’m the guy who didn't kill all those people.

Connoisseurs of Will’s tendency towards the sardonic ought find this one of his finest hours. But Margot’s initial line here is in some regards puzzling - nothing in “Su-Zakana” or indeed in her sessions with Hannibal here particularly point to the idea that Margot’s therapy sessions should leave her in a similar state to Will given the rather profound differences in the types of murders Hannibal is pushing them each towards. When it comes to Margot, Hannibal is not pushing her towards “murderer” as a general case identity, but rather pushing her towards a specific therapeutic murder with a seemingly low chance of repetition. As a narrative contrivance, on the other hand, putting Will and Margot together is irresistible.

HANNIBAL: The tendency to see others as less human than ourselves is universal.

HANNIBAL: And you are less human for it.

MARGOT VERGER: Did you just dehumanize me?

MARGOT VERGER: I met one of your patients. Will Graham. What painful-but-effective treatment did you prescribe him?

Relatedly, Margot’s rapid apprehension of Hannibal’s nature is contrived and a tough sell, especially in a season structured around the idea that it takes Jack thirteen weeks to do the same. Nevertheless, it’s narratively satisfying - an efficient use of hyper-competence (and invocation of the mythos) to make the audience invested in a new character.

PETER BERNARDONE: A bear doesn't look in the mirror and see a bear. Just sees itself. Can train a bear to be a wolf, wolf a bear. Train them long enough, they hunt together, eat together. Enough time, circumstances, there's a lot I could train even you to do.

WILL GRAHAM: Does a bear forget it's a bear?

PETER BERNARDONE: Doesn't matter. Wolf won't forget what the bear is. He never forgets the bear is bigger. Stronger. And would kill him if it needed to. Instinct makes them remember that.

WILL GRAHAM: That sort of friendship can keep you on your toes.

What is Will actually looking for in this conversation? Nominally he’s here to have Peter identify the animal responsible for the episode’s murders, but even by the endearingly slapdash FBI style that has Will investigating this case in the first place the idea that you’d go to an institutionalized animal rescuer for this instead of, say, a credentialed expert is odd. And given that Will conducts this interview alone, one assumes he’s here on his own reasons. The obvious implication is that he wants the larger conversation, with its obvious implications about his friendship with Hannibal, but there’s no sensible reason why he’d seek Peter’s insight on this - even if Will picks up on the similarities between Peter and himself, it’s not clear why he’d view Peter as having any special insight into this, and certainly not clear that the questions he’s asking would point him anywhere useful even if that is in practice what happens.

What Fuller is actually looking for in this conversation is even more obscure: Peter’s insights do not help solve the case, making this feel like setup for something. Alas, this is also Peter’s last appearance.

WILL GRAHAM: It's not an animal. It's a man who wants to be an animal.

JACK CRAWFORD: Does he believe he's an animal?

WILL GRAHAM: It's not what he believes, it's what he imagines.

JACK CRAWFORD: Considering the savagery of the attacks, he's clean and organized. Meticulous, even. What does he want?

The elision of belief and imagination is, of course, the same one that occurs within Blake’s thought and understanding of his own mythology.

“Just meat” is distinct from Hannibal’s view of his victims as pigs. Hannibal views them as lesser animals whose place on the food chain must be (fatally) taught to them. Randall, meanwhile, views them as flesh to rend and nothing else - their subjectivity does not factor into his work at all.

HANNIBAL: Someone affected by this kind of species dysphoria typically has other conditions. Mood disorders, clinical depression, schizophrenia.

Hannibal appears to be talking about furries here.

HANNIBAL: A therapist's life is equal parts counsel and curiosity. We set a patient on a path, but are left to wonder where that path takes them. You've come so very far, Randall.

RANDALL TIER: A long time since you treated me.

HANNIBAL: Which is why I wanted to talk to you about your wonderful progress, just for a moment, privately. I've seen what you've done.

RANDALL TIER: What have I done?

RANDALL TIER: Ragged bits of scalp trailing their tails of hair like comets.

A double Harris quotation, in both of the spots you’d expect. Both lines are from Red Dragon, and on consecutive pages, but in the opposite order.

Hannibal’s obvious affection for his former patient’s work is both interesting and moving. One might fear that Hannibal would sneer at the relatively unartistic nature Randall’s murders, but this mistakes Hannibal’s aesthetics as being rooted in complication. Quite the contrary, Hannibal is, like any good chef, appreciative of a straightforward and unadorned execution of a dish’s essence.

WILL GRAHAM: What's your private carnage?

MARGOT VERGER: I tried to murder my brother.

WILL GRAHAM: I assume he had it coming.

MARGOT VERGER: Did he ever. What's your private carnage?

WILL GRAHAM: I tried to murder Dr. Lecter.

Will and Margot’s meeting is as charming as you’d hope, although I have to admit the stage directions one reads when mining the scripts for these quotes are somewhat depressing in the frequency with which they assert that Margot is charming and likeable, falling into the oft-mocked tropes of describing female characters in terms of their sexual desirability.

WILL GRAHAM: I’m curious what would happen if your patients started comparing notes, Dr. Lecter. What would Randall Tier have to say to me?

HANNIBAL: What did Randall Tier say to you?

WILL GRAHAM: He said he was much better now. That mental illness was treatable. Randall Tier is a success story.

WILL GRAHAM: I believe your therapy was successful. You can be persuasive. How many have there been? Like Randall Tier? Like me?

HANNIBAL: Every patient is unique.

Will wisely refrains from revealing that Hannibal’s patients have, in fact, started comparing notes, deflecting blame to Randall and, later, Bedelia. Hannibal’s response to Will’s collapsing all of Hannibal’s patients into a single pathology, meanwhile, is a classic mixture of honesty and deflection. He’s well aware of the pattern Will is referring to, but he also resents the erasure of singular vision. That said, he can hardly complain after Will’s gloriously passive aggressive “I believe your therapy was successful.”

HANNIBAL: I think about God.

WILL GRAHAM: Good and evil?

HANNIBAL: Good and evil has nothing to do with God. I collect church collapses. Did you see the recent one in Sicily? The facade fell on sixty-five grandmothers during a special Mass. Was that evil? Was that God? If He's up there, He just loves it. Typhoid and swans, it all comes from the same place.

A rare textual raid from Silence of the Lambs, to which the show does not have the rights. The larger point, however, is seductive - the world is savage and full not only of violence, but of sickeningly amusing violence. Irony appears a necessary consequence of awareness. If we allow the pendulum to swing behind our eyes there is no design that we will see that is not monstrous. And if the universe is monstrous, good and evil are largely misapplied concepts.

Will’s successful navigation of how to handle this potentially serious interruption to his plan to catch Hannibal is an admirable feat of social etiquette.