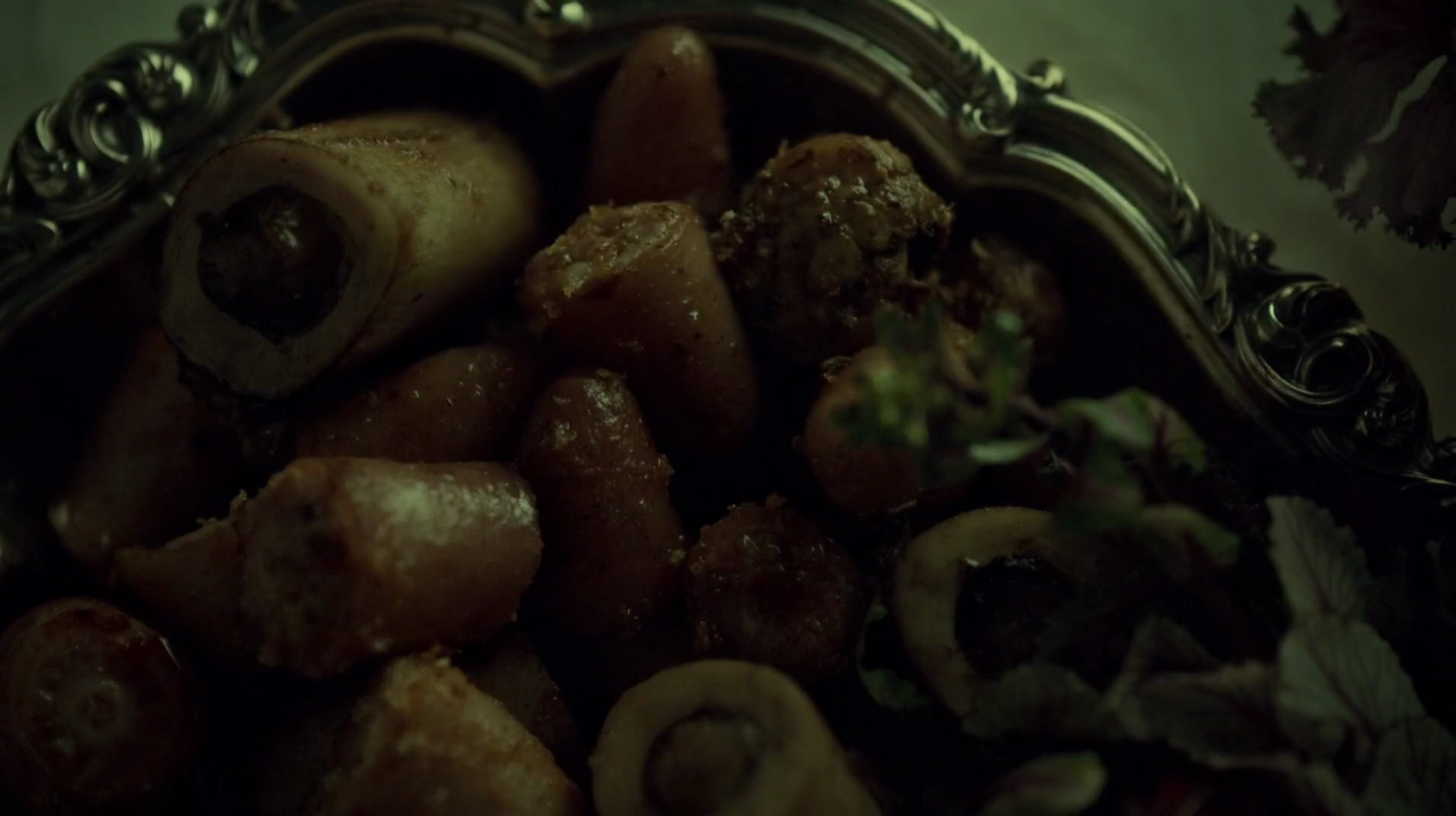 DOLCE: Dessert. Nobody particularly gets their just ones here, so let’s call this a case of running out of both course names and titles in this phase of the series. 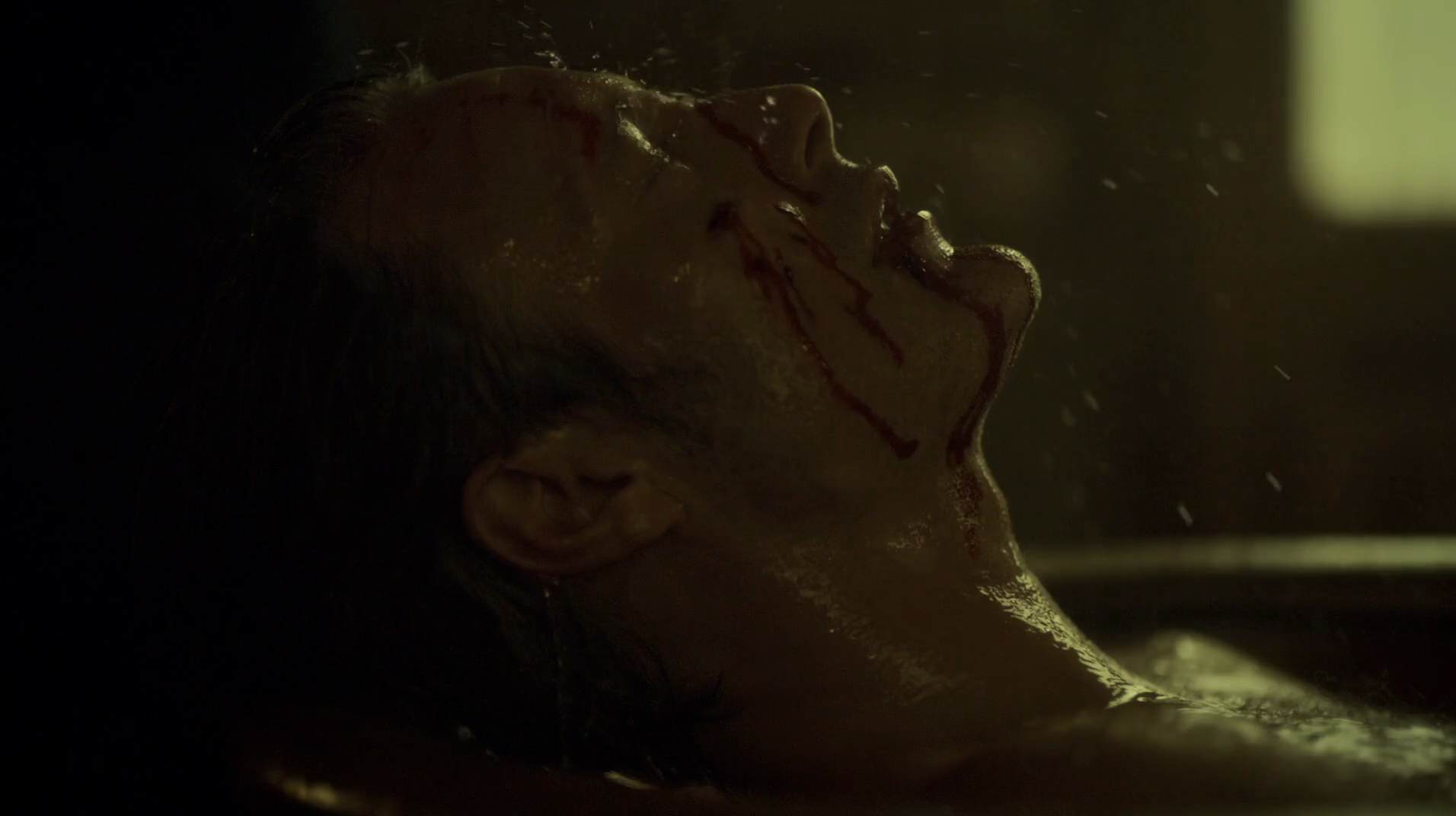 The bath has been a fragile refuge for Bedelia over the first half of this season. Here she sacrifices this safe position, turning it over to Hannibal as she cleans his wounds after his fight with Jack. This, however, contains its own form of power, as we will shortly see.

There is an odd understatement and contrivance to this reunion - Will pops up in Florence with improbable speed and simply arrives by Jack’s side, with their reunion almost entirely underplayed. But for all that this violates scads of normative rules about how narrative functions, it’s tremendously effective. The reunion between them that mattered was in “Apertivo." The significance of this is simply that it allows the plot to move forward, and so it does.

JACK CRAWFORD: And Hannibal would slip away. Would you slip away with him?

WILL GRAHAM: Part of me will always want to.

JACK CRAWFORD: You have to cut that part out.

A simple and moving confession on Will’s part. Jack’s response is fundamentally inadequate, asking something of Will that he cannot possibly give - the “have you tried not being gay” of addictions to cannibalistic serial killing,

BEDELIA DU MAURIER: You won't be coming back here for a very long time.

HANNIBAL: Memories of Florence will be all I have. Florence is where I became a man. I see my end in my beginning.

BEDELIA DU MAURIER: All of our endings can be found in our beginnings. History repeats itself and we can't escape it.

Bedelia’s fatalism is essentially a restatement of Aristotelean plot structure, and thus an overwhelmingly safe bet for someone currently inside a serialized television show. Her real concerns, however, are not so much Hannibal as herself and her end, as evinced by her use of the first person plural and by the next exchange,.

BEDELIA DU MAURIER: I knew you were intending to eat me and I knew you had no intention of doing it hastily.

HANNIBAL: Would be a shame not to savor you.

BEDELIA DU MAURIER: I haven't quite marinated long enough for your tastes.

And here we see the exquisite and frankly mad brinkmanship of Bedelia’s position - her compulsion to study and observe Hannibal wedged right up against her knowledge of how that will inevitably play out. And yet in this moment at least, she navigates an escape, getting Hannibal to, at least temporarily, leave her undigested.

CORDELL: A Buddhist singing bowl. The gong represents the start of a new day.

CORDELL: This isn't meat. This is man.

Mason’s planned consumption of Hannibal is a vulgar inversion of Hannibal’s tastes. Where Hannibal eats people to show that he is more than human, Mason eats them precisely because they are human, viewing the act of consumption as elevating himself. (He even refers to it as “transubstantiation” in a dream/vision sequence.) Hannibal has no need of this; he is the perfected man, and eating people is merely a demonstration of this fact.

MASON VERGER: I have little interest in the expensive piece of meat twitching at the end of that electrical cord.

ALANA BLOOM: Hannibal can disappear too well and you'll be left with nothing.

Mason speaks uncharacteristically here, betraying his desires unconsciously in a way he does not usually do, if only by dint of being far too conscious of his depravity. Here, however, he disavows Pazzi as uninteresting and a piece of meat even as he highlights his expense in a way that undermines it.

Alana, meanwhile, has taken to managing staggering amounts of money and corruption like a fish to water, a development that stylishly hits surprising and inevitable at the same time.

CHIYOH: You're like his bird. I'm his bird, too. He puts us in cages to see what we'll do.

BEDELIA DU MAURIER: Fly away or dash ourselves dead against the bars.

CHIYOH: You haven't flown away.

BEDELIA DU MAURIER: You're flying right toward him. How does he inspire such devotion?

CHIYOH: You're his psychiatrist.

BEDELIA DU MAURIER: You could add to what I've learned in my experience with him, and from the mute postures of the dead.

“Mute postures of the dead” is from the intro to Hannibal Rising.

All television shows have their inadequacies; Hannibal’s largest is its handling of women. Here we get a fascinating window into its unrealized potential - two characters, each in their own way suffering from their inability to be characterized outside of the profound gravities of Will and Hannibal, each of whom have an incredible amount to say to one another - a fact Bedelia explicitly comments upon here. But instead of Bedelia learning from Chiyoh, or of Chiyoh having any particular affect on Bedelia, heir dialogue lasts seventeen lines, and they never see each other again. 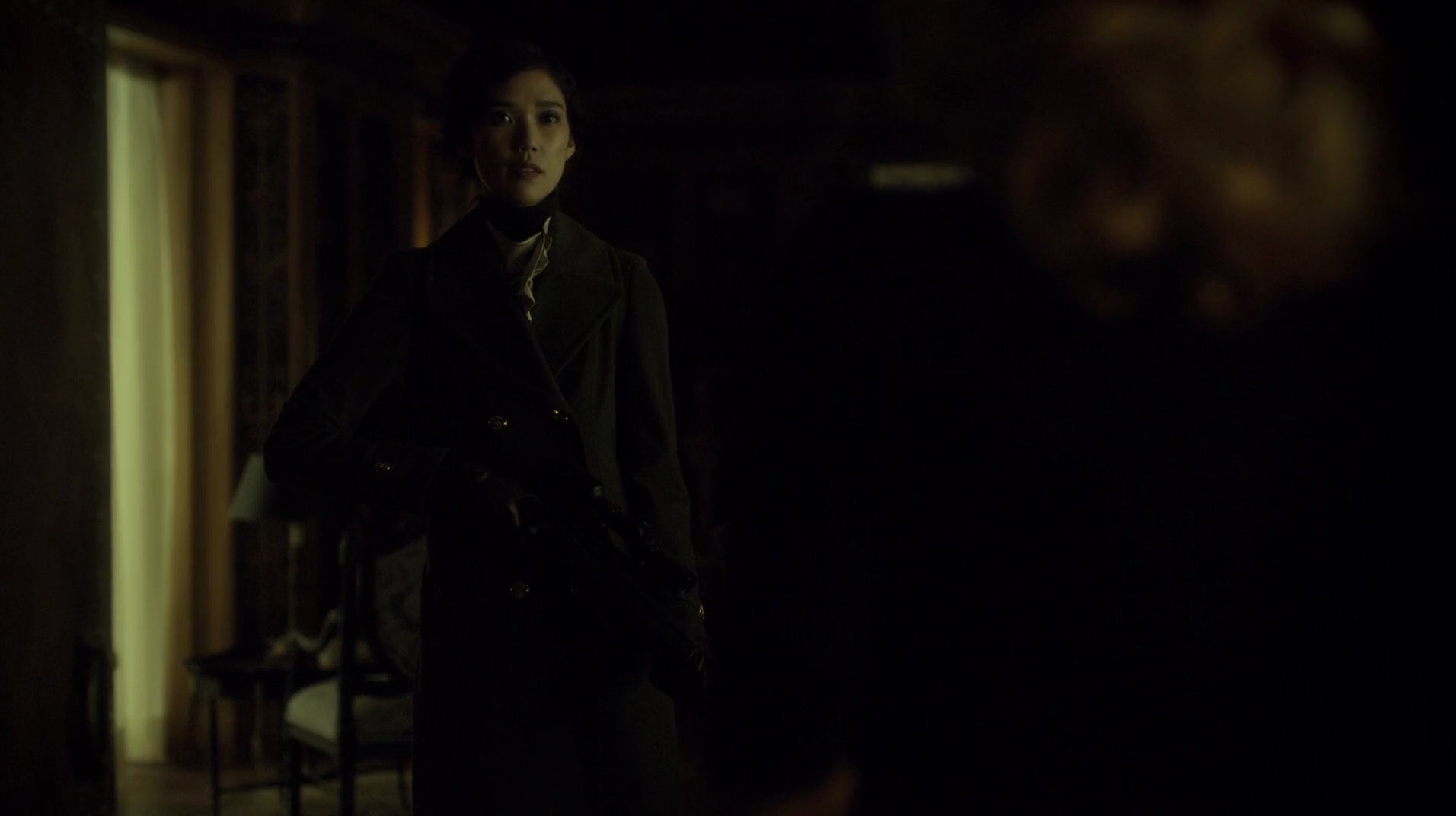 Although it must be said, Chiyoh calmly stalking around with her massive rifle is one of the most endearing visuals in the show not to be a murder tableau.

BEDELIA DU MAURIER: What do you want?

CHIYOH: I want to cage him.

BEDELIA DU MAURIER: I thought Will Graham was Hannibal's biggest mistake. I wonder if it isn't you.

It isn’t, of course; the structure of Hannibal does not allow any error on Hannibal’s part to be greater than Will. It can’t - for a character we only met three episodes ago to eclipse the show’s primary an/protagonist would be intensely unsatisfying. And yet it is hard not to think that Bedelia’s suggestion here is more interesting.

WILL GRAHAM: You expect us to believe you somehow got lost in the hot darkness of Hannibal Lecter's mind? That Lydia Fell is some construct?

Jack pulls out his cell phone and calls up an image he shows to Bedelia: a MISSING-PERSON poster displaying her likeness.

WILL GRAHAM: I don't believe you.

A rare instance for Gillian Anderson to do comedy on the show - her contemptuous drawl of “well now I’m really confused” is one of the funniest things of the season. Will’s equally contemptuous reprise of Bedelia’s lifeline to him in “Kaisecki,” on the other hand, is chilling, not so much in its specific tone (the overall comedy of the scene, particularly the next exchange we’ll talk about, mitigate too hard against that) as in the vivid reminder of how far Bedelia has fallen since then.

JACK CRAWFORD: I’m not even mad at you. In fact, I'd say I'm fairly impressed.

WILL GRAHAM: Mostly because you're still alive. When this fog of yours clears, I'd love to hear how you managed that.

Continuing (and indeed upping) the comedy of the scene, Jack and Will’s incredulity quickly melts to a sort of professional respect, a pivot played to perfection by Dancy and (especially) Fishburne, whose “I’m not even mad at you” would stand out in any episode that didn’t already have “well now I’m really confused.”

MARGOT VERGER: Last time you told me you wanted a baby, you removed my uterus.

MASON VERGER: In my defense, you weaponized your uterus. Shouldn't have been waving it around like a loaded pistol.

The phrase “weaponized your uterus” has aged exceedingly well, focusing Mason’s grotesquery in a way that feels like it’s about something more than the tawdry cartoon that Mason can often be. It’s utterly consistent with who he is, both in simple terms of being “in character” and in terms of connecting sensibly to his larger concept, which is rooted in a horror of American evangelical Christianity.

WILL GRAHAM: Good to see you.

HANNIBAL: If I saw you every day forever, Will, I would remember this time.

A strong candidate for the slashiest moment in Hannibal. Dancy and Mikkelsen unsurprisingly play this scene with understated warmth and intimacy, having held back on putting Will and Hannibal together for six full episodes now. Of course, we said this of Will and Jack as well, but here the reunion is given time to simply unfold, leaving us to linger in its emotional significance before the equilibrium inevitably fractures.

HANNIBAL: How is Chiyoh?

WILL GRAHAM: She pushed me off a train.

Mikkelsen adds a delicious pause before his second line here, finally offering it in a tone of voice that suggests more charmed surprise than anything else. It’s a good gag, but the patronizing tone of it also serves as yet another reminder of how marginal Chiyoh’s place in the narrative actually is.

HANNIBAL: Then what's left to do? Freeing yourself from me and me freeing myself from you, they're the same.

WILL GRAHAM: We're conjoined. Curious if either of us can survive separation.

HANNIBAL: Now's the hardest test: not letting rage and frustration, nor forgiveness, keep you from thinking.

It is not clear what Hannibal wants out of this interaction. It’s not for Will to stab him, surely, although we’ll get to his reaction to that in a moment. But his inclusion of forgiveness in this list makes it clear that he imagines a failure mode for Will that is based on trusting Hannibal. And fair enough - Hannibal does intend to eat him regardless of his actions here. 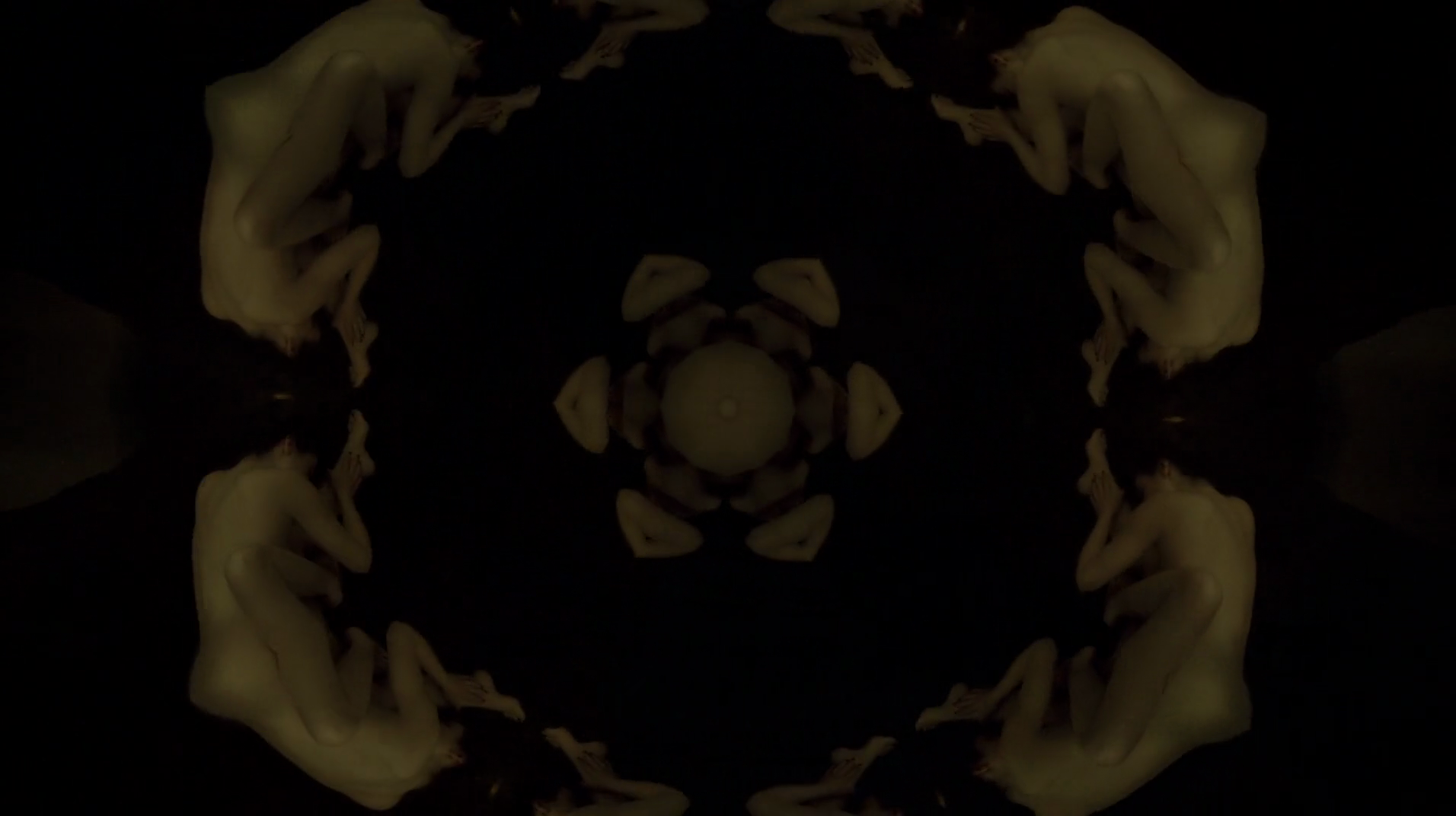 The show’s second and more visually elaborate effort at a sex scene. Where the visionary pyrotechnics of the first one made a certain sense, in that there were symbolic (if very obvious) dimensions to reveal around Will, Hannibal, and Alana’s desires, here this is a tremendous amount of visual effort expended on the reveal that Alana and Margot are shacking up. The result is the show doing weird sexy for its own sake, which is, let’s face it, a perfectly noble aesthetic goal.

HANNIBAL: You dropped your forgiveness, Will. You forgive how God forgives. Would you have done it quickly, or would you have stopped to gloat?

WILL GRAHAM: Does God gloat?

One rather wishes Hannibal had been forced to unpack that last claim. Nevertheless, it is worth noting explicitly that Hannibal seems to bear Will no ill will for wanting to kill him. Their relationship is past that, finally approaching what Chilton described back in “Aperitivo.” 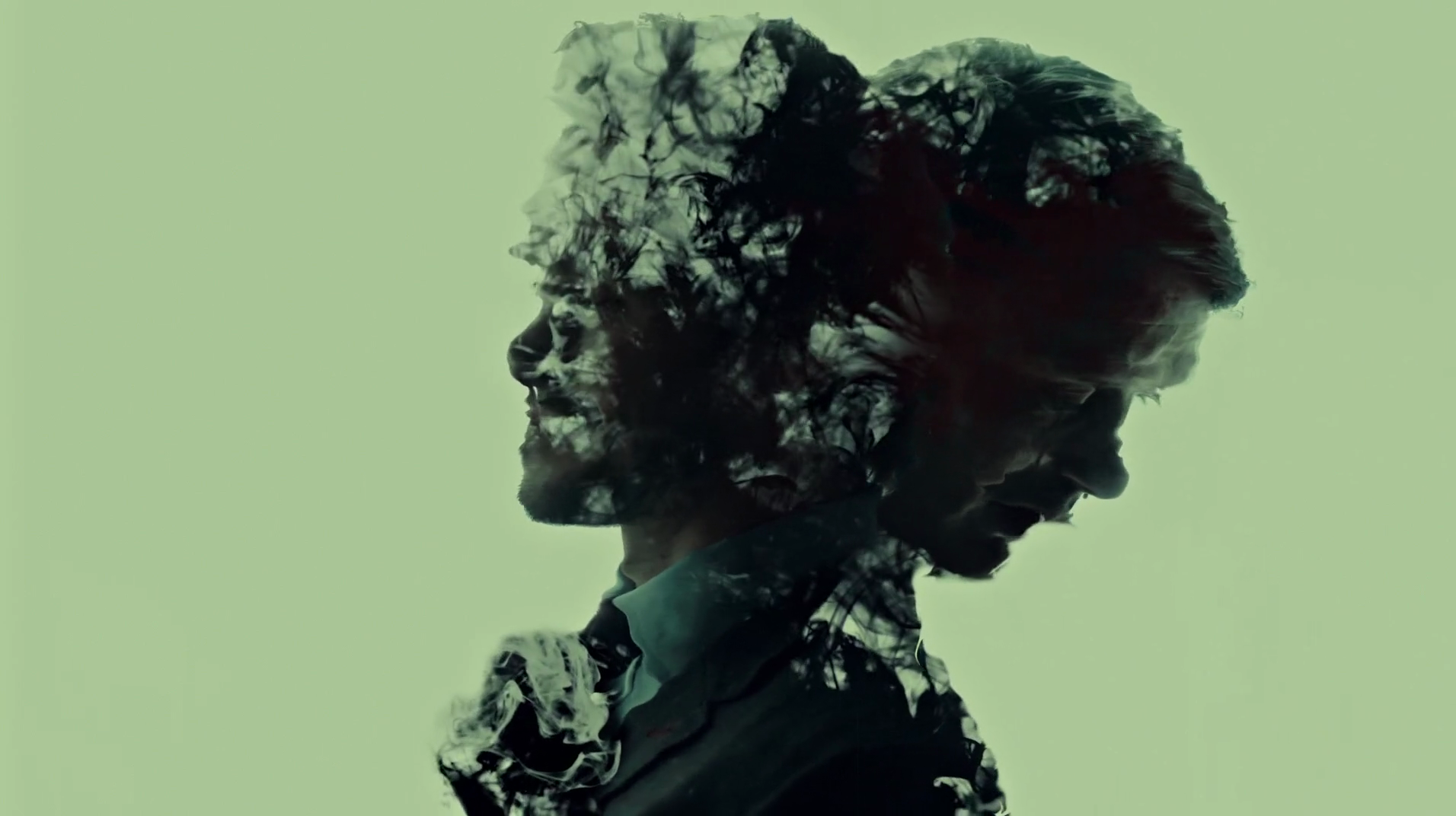 This shot does not actually say anything new, but it’s a marvelous way of capturing the visual evolution of the series - it’s weird and striking in a way that slightly over-pretentious serial killer of the week show from back in 2013 would never dare to be.

HANNIBAL: It's a parsley-and-thyme infusion, and more for my sake than yours. Have another sip, let it circulate.

Will remaining snarky and bitter as Hannibal works on eating him is a small delight. Although what exactly Hannibal imagines a small bowl of parsley and thyme infused water is going to do to affect the flavor of Will’s brain is a difficult culinary question. 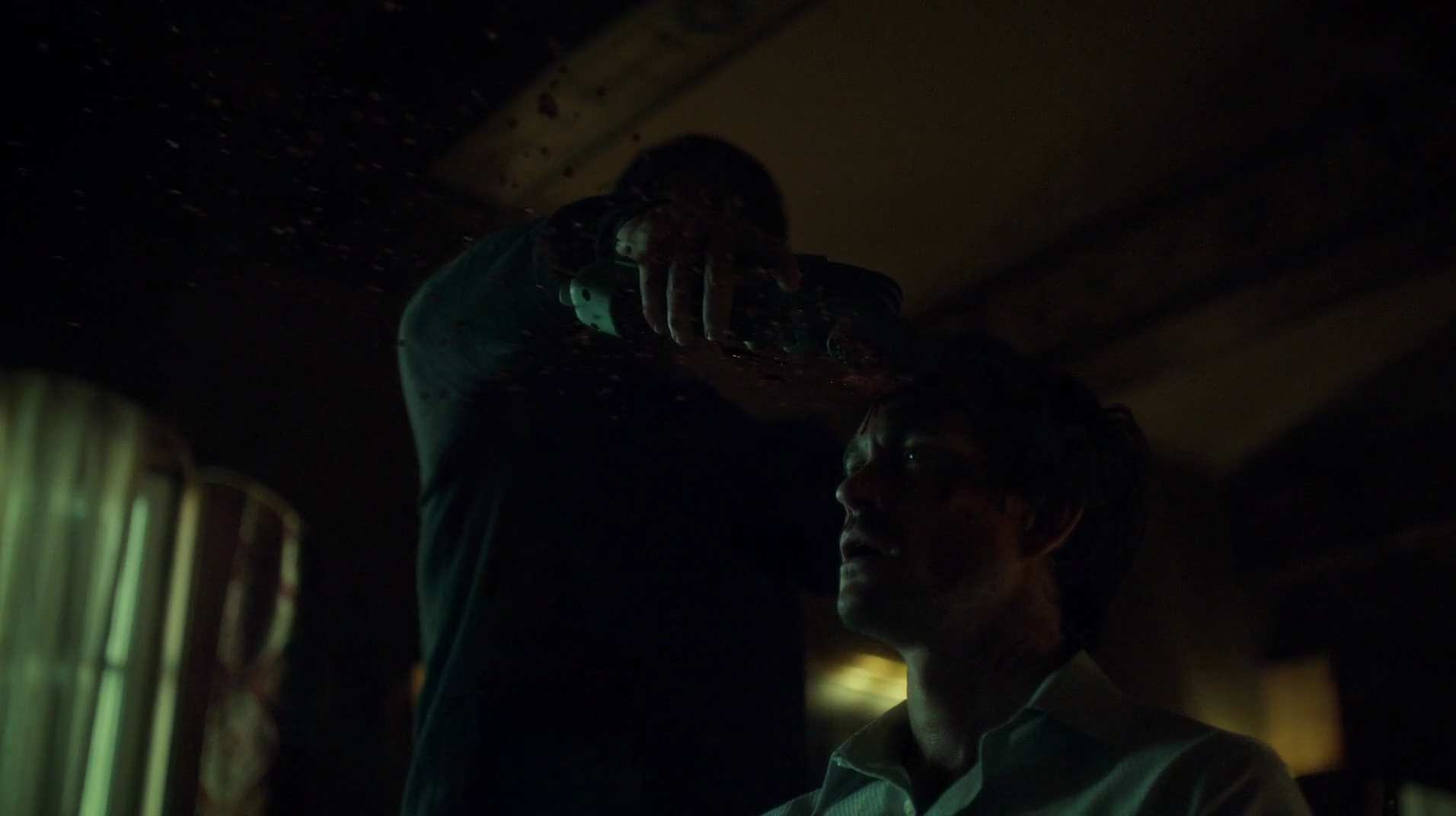 I am rarely particularly invested in avoiding spoilers, but this sequence, as the audience’s affect unravels from “how is Will going to get out of this one” to “oh no are they actually going to do it” to whatever the correct reaction to this image is, is a thing of splendor worth experiencing for the first time. So if you’re reading this without having watched Hannibal, joke’s on you sucker.

Indeed, that's one of the most fascinating lines in the entirety of "Hannibal".

>Although what exactly Hannibal imagines a small bowl of parsley and thyme infused water is going to do to affect the flavor of Will’s brain is a difficult culinary question.

The sage and rosemary must be in the next bowl over.

Actually, I do vaguely wonder if there's some "Then he'll be a true love of mine" thing going on.