Brings to mind Le Corbusier and his notion of houses as "machines for living in"... which always had a tinge of the authoritarian about it, amidst all the utopianism of early 20th century modernism (which also always had a hidden inner core of mysticism beneath all the pseudo-rational stright lines, etc). The insistence upon a buried notion of virtue (you had to be a certain kind of healthy, high-minded, thin, modern-minded, puritanical person to live in a gleaming white box with glass walls) leads to a kind of disillusion, a bit like the contempt felt by Kroagnon. The modernists (Mies, for example) got chased out by their shadowy reflections in the utopian, mystical, 'modern', puritanical Nazi party and ended up creating gigantic monuments to corporate capitalism in Chicago. The cleaners seem to represent the intersection of these ideas, rounding up the "human garbage", the unwanted elements, the uncontrolled human detritus that ruins the idealistic/totalitarian perfection embodied in the architecture.

I don't like the ending, with all the antagonistic social groups suddenly realising they don't hate each other after all and making friends.  Even the Daily Maily Rezzies turn out to be mostly nice, with only two of them being murdering cannibals.


Delta and the Bannermen

Dispiriting. So ill judged, so clashing that you can't even laugh at it.

Loud, multi-coloured, sequin-covered, self-consciously zany, folksy and naff... yet there is something melancholic, even quietly apocalyptic about watching this.

You are watching Doctor Who die. The show that gave us 'Genesis of the Daleks' is dying. In a puddle of Diet Coke. It's like watching George Orwell being kicked to death by Mr Blobby and the Krankies.

This taste malfunction carries over into the heart of the story itself. It's a story about genocidal racism... set in a holiday camp and starring light entertainers. It's like the Eichmann trial being held in Toys R Us. It's like a bright green water pistol filled with orphans' tears. It's like being murdered by being force-fed party balloons.

My god, it hurts.

I just love this story. Last time I put it on, I spent the whole 75 minutes giggling, grinning, cheering and clapping like a loon.

This is a liberal attack on Thatcherism as a psycho-cultural style... but it also notices that Thatcherism's rhetoric about personal liberty was pure hypocrisy.

The economics are absent, as they usually are in Who. Terra Alpha is a Stalinist 'paradise', i.e. everyone pretending to be deliriously happy... or pretending that they're pretending... and pretending that everyone else is pretending... while surrounded by corruption, decay and authoritarian brutality. But it's also a capitalist world, with an evil version of Bertie Basset (himself a PR image, an advert, an avatar of a company, a promotor of consumption, the friendly face of capitalism who cheerily encourages your kids to shovel sugary shite into their mouths so his puppetmasters can make a profit) at its core.

The Kandyman is the state torturer of a dictator... but he's also a killer brand, a manifestation of the confected malnutritious psuedo-delights of consumer capitalism reconfigured as a psychopathic sadist... and a tool... and alienated labour (he is the product of the labour of Gilbert M) that confronts his creator as hostile and alien power... and bureaucrat (picks up phone - "Kandyman?")... and parent ("what time do you call this?")... etc.

Like 'The Sun Makers', 'Happiness Patrol' notices the fundamental synergy and compatibility and similarity of Stalinism with 'market Stalinism', of authoritarianism with psuedo-libertarian neoliberalism. Helen A likes Silas P's "enterprise and initiative" as a murderer of dissidents. Thatcher admires the 'law and order' inherent in the criminal attacks (by government or police) upon miners, while always speciously excoriating the "moaning minnies" and preaching personal freedom, i.e. the personal freedom to stamp on the poor and powerless as long as you own the bought virtue that comes with wealth.

And it's a union of displaced/oppressed natives, dissidents, foreigners and striking/demonstrating workers that brings down the government.  Helen loses control of the state, factory by factory.  It ain't quite Leninism for kids... but it's getting there.


The Greatest Show in the Galaxy

As long as you remember to watch it as children's television, 'Greatest Show' is superlative on many levels. Just this simple decision helps you get past the rapping ringmaster without eating your own tongue.

Viewed this way, the clearly non-realist portrayals of Whizzkid, Nord and Cook etc. seem like what they are: deliberate and witty riffs on established stock characters. Cook's gradual self-revelation (from windy, pompous bore to ruthless self-preserving bastard) looks, from this angle, like a swipe at Thatcherism (with colonialism also implicated, via Cook's pith helmet).

Whizzkid is, of course, the archetypal (or should I say stereotypical) dweeby geeko nerdmeister sci-fan fan. But he's also far too kind a picture of fans. He's enthusiastic, optimistic, idealistic, etc. He reflects the awareness of past glories and limited appeal. He's a queasy little joke by the show at its own expense. He's the forerunner of LI'n'DA... though less human and more of a cypher.

The story has cheeky things to say about television itself, and the failure of idealism... "You were a geat clown once... funny, inventive..."... or the failure of the 60s counter-culture, or even the failure of culture itself.

The Circus could be a metaphor for all human cultural endeavours in a world run by people like Cook and presided over by unforgiving, demanding, self-involved, ossified power.  Begun in idealism, hijacked by cynicism, ending in disrepute and cruelty, ravaging the lush world around it. Astonishingly thoughtful and bleak, for a kids's show. And remember that bread and circuses (by which they actually meant things more like races) were what the Roman elitists said were the prime concern of the Roman plebs.

Beautifully directed, especially in Episode 1 during the chase across the sand dunes. Bellboy and Flowerchild, pursued by the white-faced clown in the gliding hearse, with music that's eerily good... at times, reminiscent of Peter Gabriel round about that time.

The junk mail bot is oddly prescient of spam email.

Great production design. The Gods of Ragnarok are an unforgettable image. Stone idols, sitting and sitting (as gods tend to do in Doctor Who), reminiscent of the heads on Easter Island.

The gods are clearly the audience, which reveals the inherent theology of all TV shows. Who seems more aware of this than most shows, with almost all its gods being seated voyeurs.

The decision to suddenly make the Doctor one jump ahead in the last episode is misguided. I've no fundamental objection to the cunning, scheming Doctor that sometimes surfaced during this era, but its unecessary in 'Greatest Show' and even disrupts the plot (not that they're paying much attention to making it make any kind of logical sense by that point anyway).

But, when he says he's been fighting the Gods of Ragnarok for millenia, he means it generally. He's always been against immovable, unaccountable, abusive, self-gratifying 'gods'. Against idols. Against the kings and rulers that sit and watch and judge and consume.

All in all, very good indeed - a refeshing leap back into creepiness, surrealism and semiotics for Doctor Who.

One great regret however... imagine this as a TARDIS team: the Doctor, Ace, Mags and Deadbeat. I'm not a crowded-TARDIS advocate, but that's a team I'd have killed for.

Even so, there are some magical moments here and there. Ace being mistaken for the Lady of the Lake, for example. And, as so often in this era, there are superb ideas under a surface mess. The Merlin thing is a wonderful conceit.

Sadly, confusing as it is, this story undermines itself by trying to be too literal and too self-explanatory. It loses any air of mystery and ambiguity.

The worst thing, however, is the painful, self-conscious, overcooked, hectoring right-on-ness of it all. We get an anti-nuke sermon delivered in the crassest, most patronising terms imaginable... with Sylv's purple-faced scenery-chewing at the end being particularly painful... and the worst crime imaginable to Ace is to utter a (clunky and naff) racial slur to her new mate.

It's all very banal and hypocritical (as is the Doctor's queasy pacifism) - especially since two of Our Heroes in this story are military people, and the cutesy happy ending depends upon people (other than the morally-superior, disapproving Doc, natch) fighting and killing and dying.

It's really quite astonishing how 'Survival' feels like the last part of a trilogy dealing with 'social Darwinism' but also with free market values and female experience in a male dominated world (which are related issues). And I think the much-maligned "if we fight like animals!" scene is much better than the anti-nuke foaming in 'Battlefield' precisely because it has an awareness of its own potential for ridiculousness. It even switches to a comic mode the second time McCoy shouts his credo. The vertiginousness of this is quite dizzying.

This is one of the few stories to dwell on the feminine principle, exploring female solidarity, female vs male forms of agression, etc. (People always forget about 'Brain of Morbius' in this context.) Moreover, it has a female 'companion' who is as far as female companions ever get from being there for males to gaze at (pardon my half-remembered feminist film criticism) because her own gaze comes under her control and becomes a weapon. The fierce, amoral, female monster character Kara is skewered by the Master (who's even dressed like some patrician Victorian dandy/Dracula) and, instead of this being a restoration of male order, it is an obscene tragedy. We're a long way even from seeing 'femininity' restored in Helen A by the death of her pet.

It's notable how deliberately jumbled the masculine and feminine becomes. You have Ace at the end, almost surrounded by young males, obviously about to be attacked by representatives of the Master/Midge's new order - which strongly suggests a ruthlessly literal version of the kill-or-be-killed 80s political/economic ideology - and yet the power that has infused them comes from a world that embodies aggression in a natural form via intensely female symbols.

The Master has never been more hateful than he is here, where he starts embodying patriarchy and ideological Thatcherism.

They do overegg the spelling out of the theme a bit. I snark at 'The Daemons' for doing that, and even tick at Bidmead for it, so if I don't acknowledge the same problem in 'Survival' then I'm a rotten old hypocrite. 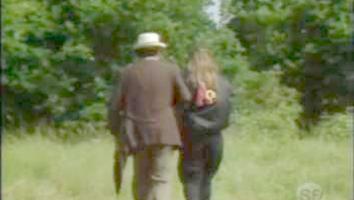 Is there any particular album or song of Peter Gabriel's you believe is similar to Mark Ayre's music for The Greatest Show in the Galaxy? As you say from 'round about that time' I assume you're referring to the Passion soundtrack. :)

I didn't have a specific track in mind, but I did think that some of the music - particularly during the scenes where Flowerchild and Bellboy are chased across the dunes by the kites - was reminiscent of tracks from Passion and So. 'Mercy Street' for instance.

Yeah the synths [at least I think they're synths] in Mercy Street sound just like the music used when Flowerchild and Bellboy are chased across the dunes by the kites, never noticed that before. Can't wait for you to look at the other McCoy stories, especially Fenric. :)