“There are usually two sides to a story”: Second Chances 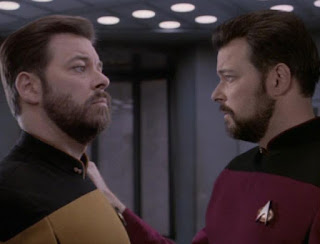 Wait...Didn't I already cover this one last season? Oh well, it was a great issue worth hyping up again, even if talking about it here almost a year later loses a lot of the context of reading it as part of its story arc. Anyway, so this is issue four of the story arc I dubbed Separation Anxiety after the title of issue three. The story on the whole deals with the saucer and stardrive sections of the Enterprise being flung to opposite ends of the galaxy after an encounter with a mysterious alien relay station. All the while, the crews of both ships are engaged in combat with a territorial race called the Sztazzan, who new transfer officer Terry Oliver has had tragic prior dealings with.

A major theme of this story are bridges, both actual starship bridges and structures that can either bring people together or keep them apart. Terry Oliver hates the Sztazzan for a previous skirmish she was involved in that resulted in the destruction of her former ship and the deaths of its crewmembers, and she's paralleled with both Chief O'Brien (this was originally released before Star Trek: Deep Space Nine premiered, you understand) and Ro Laren, both of whom have had similar traumatic experiences with enemy combatants, but whom have been able to deal with their grief and trauma in more positive and constructive ways. But this issue was a turning point for Terry, because on an away team mission led by Doctor Beverly Crusher, and following a conversation about moving beyond hate with Chief O'Brien, she finds a wounded Sztazzan officer and...

Fuck, that's not the right “Second Chances” is it? Dammit.

It's never sat quite well with me, even back in the day (“back in the day” here referring to the early 2000s, as this is another episode I didn't watch on original transmission) how the show felt the need to jump through a bunch of rhetorical and technobabble excuses to come up with a second Riker who could be more rakish and insubordinate for a *lot* of reasons. Firstly, it once again smacks of conflict-for-conflict's-sake childishness, but it also idolizes the wrong parts of Will's personality (or what people seem to think Will's personality is). And don't you for one minute think this writing team didn't 100% prefer writing for Thomas over writing for Will: There was even an idea floating around early in this episode's pre-production that Will would be killed off and Tom would take his place (or rather Data's, who would have been promoted to first officer), because nobody was going to expect it and it would have shaken up the crew dynamic. Thankfully that got canned pretty quickly, but it still gives me the chills just thinking about it.

There are just so, so many ways how that would have been catastrophic for the show, and the team's preference for Tom says a lot about how they see these characters. The very fact they felt the need to come up with a “hipper, edgier” Riker says to me they think Will is boring, and that's a line of argument I actually remember. I distinctly recall hearing fans back in the day (this time I do mean 1993) joke/complain that Will's only purpose on the ship was to lean over things, bark orders and say “Shields up, Red Alert” every episode. Funnily enough, Will's reputation among fans today, that of the galaxy's greatest Casanova space stud and interstellar sex tourist (that is, Kirk 2.0) is way more applicable in the actual show as produced to Tom. That's not to agree with the older fandom that Will is boring, far from it: Rather, what I'm trying to argue is that if this was part of Will's character at one point he's long since grown beyond that and channeled his libidinous energies into more mature and constructive outlets. Which is actually what “Second Chances” is about on one level, even if the episode bizarrely seems to mean for this to be a criticism of Will. You know, because nobody writing this show knows what utopianism and being a grown-up means.

Nowhere is this more painfully evident than in Tom's relationship with Deanna, which is far and away the most crippling part of this episode. As awkward as Tom individually might be, at least he doesn't show up again in the series, but the effect he has on Will and Deanna, or at least the perception of what their characters are like, leaves a lasting impression. The reason the writers wanted to hook Tom and Deanna up was because it was their way of exploring a relationship they felt hadn't been looked at deeply enough: The one between Deanna and Will. The impetus seemed to be that there was some kind of outlying romantic loose ends dangling over them that needed to be addressed somehow because, after all, that's just the kind of thing that traditionally makes good drama. But the problem is, as it always has been, that Star Trek: The Next Generation is neither traditional nor good drama-It's something different, and it requires a different skillset and playbook. There are no romantic loose ends between Will Riker and Deanna Troi because they're *former* lovers in a utopian setting, end of story. The entire point of their characters has always been that they broke up and are totally cool with it and remain intimate friends, and that dates all the damn way back to Star Trek Phase II when they were Will Decker and Ilia.

This is an instance where the most interesting story isn't the story that was produced, but the one that went on behind the scenes. First and foremost this was LeVar Burton's directorial debut, and a big turning point in his career. He'd been wanting to try his hand at directing for awhile but was afraid to ask, and when he finally did Rick Berman flatly told him that he'd been waiting for him. Burton has gone on to become an incredibly accomplished director, and he certainly does do a good job with “Second Chances”: The technical complexity of those doubling effects shots are not to be discounted, even though I don't have a ton to say about them because we've seen this done with Brent Spiner a million times before.

Then there's Mae Jemison, who it's impossible not to call the highlight of the episode. I of course knew her as Mae Jemison for a long time before, and when I saw from a picture of her in a Starfleet uniform that she'd done an episode of Star Trek: The Next Generation I thought “good for her”, although even she couldn't sell me on a premise that seemed from Starlog's writeup to be questionable at best. Jemison was a big fan of the Original Series growing up, and seeing Nichelle Nichols play Uhura inspired her that she herself could be an astronaut someday. She got in touch with LeVar Burton to express her desire to come to the show, who knew this was an opportunity he couldn't pass up. And furthermore, he got in touch with Nichelle Nichols herself and asked if she might like to come down and meet the first African-American woman to go into real-life outer space. There's no doubt Mae Jemison's days on call were anything less than magic.

It's a textbook example of how it's the idea of Star Trek and what it means to each of us individually that makes all the difference in the world, not so much the TV show. Share on Twitter Share on Facebook

Wait, Riker had a reputation for being boring back in the day? I never knew that.

Because one of the slowly growing realizations I've had this season is that Riker is an incredibly boring character. He's been in a couple interesting episodes and will be in a couple more due to him being the preferred victim for episodes that play with what is and isn't real, but as we'll see that role could as easily be played by Worf. I honestly think the most interesting thing iker could do by season 6 is accept command of another ship so Deanna can become first officer.

Redemptive reading coming soon. I agree with your criticisms of course, but yeah, I've got some thoughts to organize later that should add interest.

One of the most important things I've learned as I've gotten older is this: There's always two sides to every story. Even when you're talking to ...