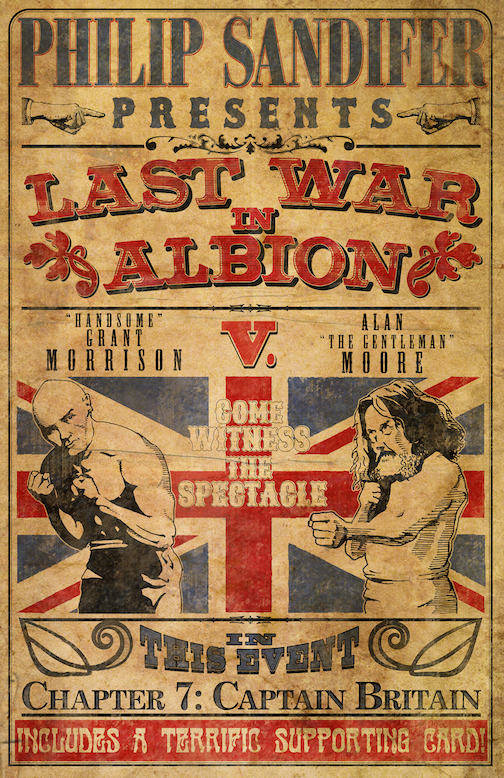 So, I was going to launch a Kickstarter today, but unfortunately I guessed wrong on how long it would take Kickstarter to approve my Kickstarter, resulting in there being no content for today. I could image up the next section of Last War in Albion and put it up a day early, but honestly, it's 1am and I'm fighting off the last of a sinus infection and I just don't have the energy, so I figure I'll just have the content over the next few days be in random and surprising order.

How dreadful for you! Your counted on blog content, absent! Because of my grotty sinuses! Whatever shall you read instead? What other blogs and websites do you consume when trawling the Internet in your morning "I should probably be doing actual work" crawl? Tell me these things, and then on a day that is not today I'll post actual content.

But for now there's at least some good news - the omnibus of Last War in Albion Chapter Seven is ready, with a brand new and beautiful cover from James Taylor.

I've decided to cut the price of the omnibi to $1.99, which makes them ill-suited to Amazon (who cut your royalty rate in half if you go below $2.99), and so future single chapter omnibi will only be available via Smashwords. You can still get them for your Kindle and transfer them there - it's just that it's the difference between me making $1.40 a book and $.70 a book.

So, Chapter Seven is here.

That said, in celebration of the new cover I've compiled the whole shebang so far, including Chapter Seven, into a single ebook. That's price at $3.99 and so is still available on Amazon (and Amazon UK), as well as being available on Smashwords. Share on Twitter Share on Facebook

Hmm, your blog is part of my evening routine, since I'm Australian and I get to see a new post on Mondays and Wednesdays (not so much Fridays now >_>) at 7PM during the winter and 9PM during the summer (and there was a week or so when it was 8PM because your time had changed but mine hadn't). I usually settle in with a cup of tea or something after dinner and read this.

In the mornings I tend to go to reddit, check Xbox/Playstation news, local bargain sites, facebook, and Tor.com blogs, which have a variety of regular segments and some interesting one-off posts so every day I usually find at least one thing I want to read (and on other days I end up with about 6 tabs open which I read whenever I get the time).

Hmm. On most days I read MarkReads.com or MarkWatches.com, depending on what precisely Mark is following at the moment (currently MarkWatches is Supernatural, the West Wing, and The Middleman, three shows I care little about, while MarkReads is doing The Light Fantastic, so I'm pretty much entirely at the latter). I will also pop in on AnaMardoll.com from time to time, particularly if she's posted another installment in her slow shredding of the Narnia books (currently on Voyage of the Dawn Treader, the tale of a group of imperialist jerkasses who wander the seas, propping up tyrants, laughing at the oppressed, and starting fights for no reason). I used to read a dozen webcomics or so, but I've stopped since I started actually maintaining a blogging schedule. (No, I don't know what the connection is either, but that's how the timing works out.)

...Daylight Savings in the Southern Hemisphere goes in the opposite direction.

(I find time zones and everything to do with them an arcane mystery beyond my ken.)

Actually, it goes in the same direction. It's just that we have summer when the rest of you are having winter, and vice versa.

Right, so at any given time it's going in the opposite direction. Forward when we go back and vice versa.

In between searching for music reviews on Blogspots, I regularly keep up with this blog:

Yasmin is a 4-year old little girl who was diagnosed with Acute Lymphoblastic Leukaemia in 2012 - the exact same cancer as my 16-year old son has just finished treatment for. I like to keep up with their treatment and offer support of the "been there, got through it" kind whenever they hit a bad patch. Life during cancer treatment is hellish. The only thing that keeps you going is the friendship of those who have been where you are now. Part of me would love our two families to meet up when Yasmin gets the all-clear but I'm not sure a 16-year old would have much to say to a 4-year old! Plus she's sadly too young to have seen Doctor Who yet.

Apart from this site, I generally check out the Steve Jackson Games' Daily Illuminator, the Sluggy Freelance webcomic, and my subscribed threads page at Gallifrey Base I also check the RSS feeds for the Ood Cast (just to see if they've uploaded anything - it's been a loong time since the last podcast) and Big Finish. After 9 I check my bank account to see if I need to transfer any money from savings (not especially fun but not work either). That's about it for regulars!

I read a ridiculous number of blogs and webcomics. On the nerd front, John Scalzi's Whatever is one of the best, especially his discussions of social justice issues as relating to fandom. I too read Ana Mardoll consistently, especially her deconstructions of Twilight. Slacktivist has great discussions of progressive politics in Christianity and a generally very good comment section (although there is occasionally a troll infestation, as it is unmoderated). I also read a lot of parenting and biking/smart growth blogs. As for webcomics, I love Skin Horse partly because it's about the bureaucracy of working for the federal government and partly because it's about mad science. Other excellent webcomics are Girls with Slingshots, Something Positive, Bad Machinery, Questionable Content, and XKCD.

Lately I spend way too much time on io9.com, where there are a couple fun Wonder Woman threads going on right now that made me think of your book. I'm also reading Adventures with the Wife and Blake, of course, and two wonderful blogs that need no introduction, Lance Parkin's and Relative Dimension.

Webcomic-wise I'm all about Achewood, Hark! A Vagrant, and Toothpaste for Dinner.

Nyq Only 6 years, 4 months ago

My morning trawl:
Usually pop to Phayrngula http://freethoughtblogs.com/pharyngula/ for some atheistic creationist bashing reads
io9.com and The Mary Sue http://www.themarysue.com/ for a pop culture fix
When a new comic is due http://gingerhaze.com/nimona
If I have time I then do a round of the global warming blogs - e.g. http://scienceblogs.com/stoat/ as well as some of the high traffic denier/anti-warmist blogs to see what their fallacy of the week is
Then maybe something like Slate

I also read several style blogs, in hopes of actually getting some kind of clue in that arena. One of my favorites is Primer, who today are running another installment of "required viewing," coincidentally featuring Sherlock. The previous installment was Doctor Who.

After checking e-mail and Twitter, I generally check some webcomics. Most of the webcomics I read are conveniently linked to by www.arthurkingoftimeandspace.com, then I read the ones that aren't, if I remember about them.

I then obsessively check if www.narrativia.com has updated, even though I've set up an e-mail alert that will tell me if it ever does. I'll probably then continue my search for a Pratchett fix by seeing if there's anything new at www.discworldemporium.com or www.dwcon.com.

I don't have a specifc geek-news site I make a point of visiting; I get my geek news by following Twitter links, which will generally take me to www.themarysue.com, www.sfx.co.uk or www.bleedingcool.com. A couple of times a week, I look to see if there's anything new at housetoastonish.com. And I regularly check hasdcdonesomethingstupidtoday.com. If I'm in a Muppety sort of mood, I'll look at www.toughpigs.com.

Then I spend hours on TV Tropes.

People don't understand time. It's not what you think it is. People assume that time is a strict progression of cause to effect. But actually from a non-linear, non-subjective viewpoint it's more like a big ball of wibbly-wobbly timey-wimey... stuff.

I'm a frequent visitor/contributor to purile yet skillful image-manipulation web-board b3ta.com. I peruse the (soon to close) Classic AV Club reviews such as the almost-completed DS9 reviews, catch up on the Adventures with the Wife and Blake, wish for more Dr Huh? then flick through the latest Dinosaur Comics, XKCD and Achewood if there is any. Then if I'm still avoiding work I'll see if anyone interesting has been interviewed lately on The Big Issue's Letter to my young Self then pop over to Cockpit Conversations - a blog which I started following ages back for reasons I can't recall.

Sad to say it, but this right here is my main outlet in terms of both blogs and social media. I am on Twitter, but only so I can stalk minor Doctor Who celebrities and play Clayton Hickman's hashtag games. Everything else tends to frighten me away - this comment section community is the only one I've found that is small enough (and frankly, articulate enough) for me to handle.

Oh, and podcasts are a big deal for me. Having both chronic headaches and a study routine that revolves around looking at a computer screen, I like to be able to digest news/opinion in audio form while exercising. I currently listen to Radio Free Skaro, Verity! and Toby Hadoke's Who's Round.

io9.com is my geek morning crack, and afternoon, and evening, and way too late at night crack too. io9's Observation Deck, Space and some Gizmodo stuff are also frequented.

As well as that I'll read The Straight Dope most days, check Separated By a Common Language once a week (it's not updated as much as it used to be). When I remember I'll check out Muddy Colors and Underpaintings (as an artist, they're the best places to go to feel worthless but inspired). Less frequently visited, but binged on when I do, are Mark Reads/Watches and the infrequently updated but completely brilliant Relative Dimension (by fellow Sandifite Iain Colman). Somehow I find time to also read this blog, and do other stuff.