Any self-respecting toy collector knows you've got to have bad guys for your heroes to fight against. And yet this is Star Trek: The Next Generation, and in spite of what certain creative figures might thing, fighting is pretty much the last thing we ought to be considering. And so we see another manifestation of the curious dual role the Playmates line must play: Fun enough for kids to want to play with and bang together, and sophisticated enough to engage adults.

Playmates knew the Enterprise crew had to meet some people while they were out there exploring space, so as part of the first wave of releases they included a handful of aliens you could either speak or spar with: A Borg drone, a Ferengi, a Romulan commander and Gowron. In hindsight these are sort of interesting picks; the first wave came out in the wake of Star Trek: The Next Generation's fifth season and was clearly meant to capitalize on it-Just take note of how Captain Picard is wearing his “captain's jacket” and, of course, the Star Trek 25th Anniversary branding. But while these aliens are in many ways the iconic ones for Star Trek: The Next Generation, none of them played especially major roles in the fifth season (with the notable exception of the whoppers that were “Redemption” and “Unification”): If anything, you'd at least expect a Cardassian to be among the initial releases, but nope. Presumably Playmates figured that since this was the first set of Star Trek: The Next Generation releases, it'd be best to start with the recognisable staples. 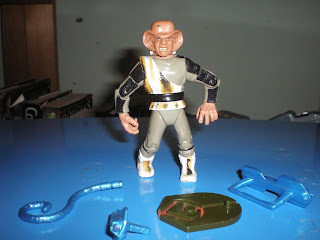 Even so, the inclusion of a Ferengi pirate, particularly one who looks like this, is an unexpectedly pleasant surprise. Although they were intended to be Star Trek: The Next Generation's primary antagonists, they were supplanted at the beginning of the third season by the Romulans, and they haven't really played any significant role in the TV series' plot in three years. But Playmates' Ferengi is explicitly modelled after the ones in “The Last Outpost”: He's got it all, from the animal skin uniforms to the fur boots to the crackling energy whips, down to the fact he looks eerily like Armin Shimerman's Letek. Even the clip-and-collect card cites the same Federation intel the crew went over in “Encounter at Farpoint” and “The Last Outpost”. Furthermore, this Ferengi is most assuredly not meant to be a joke, with the card making numerous references to how cunning, dangerous and ruthless his people can be. 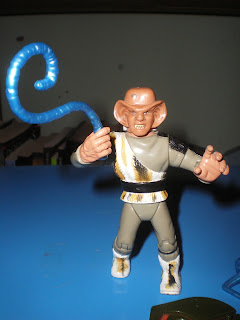 Here I am finding myself talking out of two sides of my mouth again. Because I have to write this with the conceit that I'm just now discovering this toy and the Playmates line now, when in truth this guy was one of the very first pieces of Star Trek anything I ever got. To me, this is *always* how the Ferengi have looked and acted, and this figure gave form to the half-remembered dreamlike imagery from half a decade prior I could only hazily recall. With this Ferengi, Playmates invoked and caricatured the imagery of “The Last Outpost”, and in the process made it bigger, grander and more memorable than it had ever been: Apart from the whip, he comes with a unique stand, a set of dilithium crystals (not in the picture) and two Ferengi standard energy weapons (again, I cut the phaser beam off of mine), all clad in unforgettably striking metallic blue. It's that whip that still sticks with me though: It looks menacingly lithe and as if it's constantly crackling with electricity, ready to discharge it all with a strike on some unfortunate victim.

This Ferengi seems feral, dangerous and intimidating, yet also oddly bewitching and captivating. He seems almost...Dare I say it? Cool. He's one of my favourites from the first wave, probably one of my favourite Playmates figures in general because his iconography sets my imagination running wild like little else in this line. I maintain there's a haunting, ineffable power to extremely early Star Trek: The Next Generation, something fluid and intangible belonging to the realm of dreams. This is very possibly connected to it being made in the High 80s, and for me it showcases Star Trek: The Next Generation at its most raw, pure and powerful. “The Last Outpost” is one of the key defining moments in this for me, and this Ferengi figure captures that. To me he embodies everything that was evocative about “The Last Outpost” and also everything I projected onto it. This is what real modern totemism looks like. Naturally I looked for any excuse I could to use him, up to an including subbing him in as an understudy for Quark. 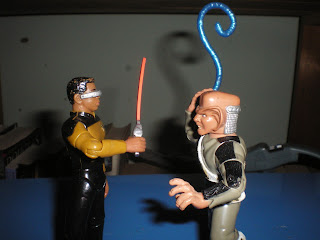 As we go along, you may find. I have some very unorthodox views on Ferengi cultural norms. 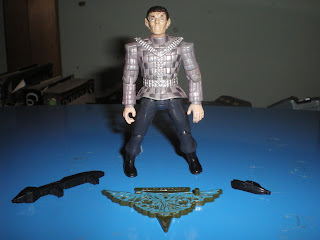 Like just about everyone in the first wave, the Romulan saw an incalculably massive amount of action. Although he bears a passing familiarity to a few Romulan commanders, most notably Tebok (another call-back to the first season!) and Tomalak, he's ultimately meant to be just a generic Romulan. Which is fitting, as that's precisely how I used him: Apart from Tomalak himself and T'alar from Star Trek: Deep Space Nine - Hearts and Minds, this guy was wheeled in literally any time a Romulan of any status or distinction was required. He's got the weathering to show for it, though he's held up surprisingly well over the years all things considered as far as my Playmates Star Trek figures go. He comes with a Romulan PAAD (which I have since lost), a disruptor, a “Romulan phaser rifle” described as a “perfect copy” of the Starfleet phaser rifle (which really just meant Playmates didn't want to spring for the extra mould to make the Romulan disruptor rifle from “Unification”) and a unique base. 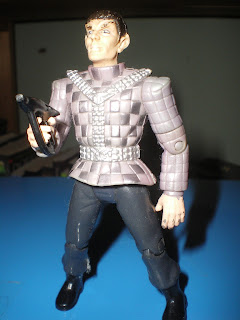 (That disruptor, by the way, has had just as storied a life as its owner. Partly because of the distinguished role they played in Hearts and Minds, but mostly because the Playmates figures idiotically couldn't hold normal phasers, Romulan disruptors became the weapon of choice for *everyone* in my plastic Star Trek universe. As a result, Romulan figures and accessories became quite precious and sought after recruits for my crew.)

The base has a funny story attached, because for the longest time I visualized the Romulan insignia upside-down. That is, I thought the part that was pointing down was meant to be pointing up. See, I thought the pointy end at the bottom that's meant to be the bird's tail feathers was really it's beak and that we were looking up at it in flight from the ground. Actually, the beak is an indefinable squiggle in the middle of the symbol and we're meant to be looking at the bird rearing up head-on. One thing I will give Star Trek Nemesis credit for is coming up with a new emblem for the Romulan Star Empire that looks far more striking and distinctive, one of the only times I prefer something about Star Trek: The Next Generation that didn't have its origins on the TV show. 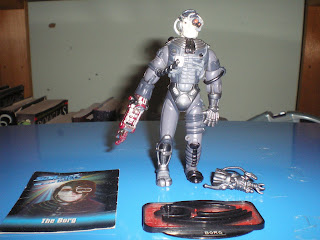 I have very little to say about the Borg drone, because he is very boring. He's got a bunch of wires and cords and shit coming off of him that restrict how much you can move him, and indeed you can see in the picture one of the cords on mine is broken off because I had the audacity to actually want to play with him (in fact, I even think there's supposed to be one more of those rubber hose things that just came completely off). He does come with two swappable arms though, which is cool. The silvery one I've got on him now is my favourite because it has a little claw grip you can move up and down. He also has a base and a trading card (which leads me to believe my Borg is a reissue from a later wave rather than one of the initial releases). Because he was boring and useless the Borg drone was mostly cannon fodder for action scenes, or comic relief as we watched him topple over under his own lopsided weight hilariously. 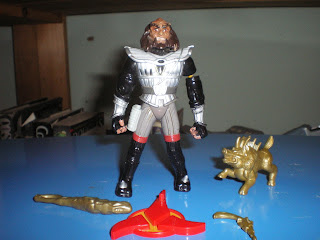 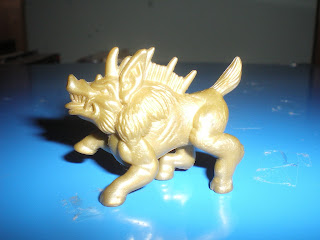 Gowron, by contrast, is a true warrior. The would-be chancellor of the Klingon empire is one of the most unique and exciting figures in the first wave and has lived many lives. He comes with a Kligon scepter/painstick, an eye-catching imperial insignia base, a disruptor and, delightfully a targ minifigure! Targs are awesome and minifigures are awesome, so this makes Gowron awesome by association. Once again, Playmates has gone back to the iconography of the first season and evoked it with style and flair: The targ from “Where No One Has Gone Before” was a boar with some fur and sticks glued to it, but this little guy looks positively regal, as if he belongs on some heraldic symbol somewhere. Also neat is how Gowron actually has a holster for his disruptor: Unlike the bridge crew's phasers, which you had to cut the beams off to fit them in the holsters and even then it wasn't a perfect fit, Gowron's holster is meant for his gun and it first very snugly. So snugly, in fact, it can be a bit of a chore to get it back out again. 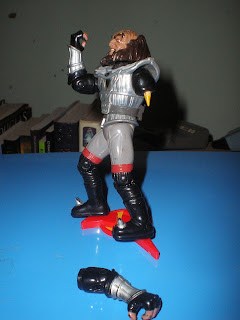 Like the Romulan commander, Gowron has played many different roles over his life. Apart from Gowron himself, he acquits himself quite well to being any generic non-Worf Klingon, including Captain Kargan of the IKS Pagh from “A Matter of Honor”, Captain Kol and Lieutenant Koleth (both from Star Trek: Deep Space Nine - Hearts and Minds). Unfortunately, this has also meant Gowron has sustained his share of injuries over the years, the most crippling of which has been the loss of his left arm. Like Wave 1 Deanna Troi, Gowron was also the test subject for some experimental surgery performed by my grandfather, however the methodology used on him, involving a golf tee and a hollowed-out arm socket, was noticeably less effective this time around. I'd say Gowron was due for a regeneration, except I'm not sure if Klingons would consider that dishonourable or not.

What's important to remember here is that objects hold the meaning we project onto them for us. When we write the symbol of our memories and emotions onto an effigy, we give it power and allow it to remind us of those things forever more. This is the power of the facsimile.
Share on Twitter Share on Facebook

The Borg figure looks more like one of Lore's Borg from "Descent" than the "Q Who" Borg pictured on the trading card. The logo is from that episode.

My "First Contact" Borg figure had the same problem with his silly cords, and suffered the same damage. I hope you cover the movie toys, because the First Contact line was amazing.