The Borgias wants us to follow Cesare's career with sympathy, but also shows him having people tortured into madness.  What is the show's position on this?  Oddly, it tries to whitewash him even as it revels in his dark side.  It makes his victims into rapists and murderers.  It depicts him as personally involved in tormenting Savonarola, but makes Savonarola a fanatic (of course) and a vicious homophobe.  Now, it's true that Savonarola instituted strictly puritanical laws in Florence, including against sodomy... but that was applicable to hetero sex as well as homo.  Of course, I wouldn't want to defend Savonarola's views in their entirety.  He was not a modern democrat.  But he and people akin to him - Munzer, Cromwell, the Levellers, the Diggers... the p/Protestant revolutionaries of the era of transition from feudalism to capitalism - were more than just foaming fanatics.  They meant more than that.  Of course, revolutionary ideals are always depicted as fanatical and dangerous in mainstream culture, more horrible by definition than any status quo they may challenge.  c.f. anybody in Gotham City who doesn't like draconian laws and huge imbalances of wealth.

On the subject of Savonarola, we of course get a depiction of the revolution he led in Florence against the Medicis as an irrational explosion of fanaticism and lunacy.  We get no hint of the scale of corruption and oppression committed by the Medicis, no real hint of the horror of poverty in Florence alongside the amazing cultural flowering and explosion of wealth.  We get nothing about the popular support for Savonarola, the support of artists like Michaelangelo and Botticelli (we even get Machiavelli and Cesare tutting over the burning of a Botticelli on one of the Bonfires of the Vanities).  The Florentine republic created after the people kicked out the Medici was astonishing for its time.  The franchise was extended, public office was opened to lower ranks, the use of capital punishment was limited, etc.  None of that.  Natch. 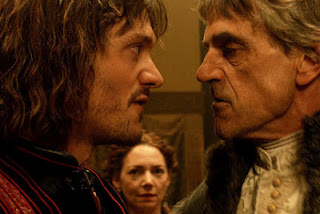 And, to loop back to what I was saying earlier, we get no sense of the scale of corruption in the Catholic Church that Savonarola and people like him were rebelling against.  Pope Alexander VI, played (ludicrously, with stuck out chin and silly gruff voice) by Jeremy Irons, is shown to be a libertine, a spendthrift, a buyer and seller of offices, etc... but we're evidently meant to relish him as a morally ambiguous figure whose passions are enjoyable to witness.  He is also shown giving a shit about the poor of Rome, going out at night in secret to investigate why the orphans don't got no clean water.  He even gets to deliver John Ball's line "When Adam delved and Eve span, who was then the gentleman?" in response to aristocratic bigotry.

So, moral ambiguity at all costs... even at the cost of any moral compass in the drama, or any semblance of historical truth.  There are, I think, worse sins in drama than areas of moral clarity. Share on Twitter Share on Facebook

A fascinating observation by Gramsci: the French Revolution was the Reformation + the Renaissance. It is worth speculating (so long as we accept there is no definitive conclusion) whether a popular movement could have been harnessed to a superior worldview in medieval Italy or Germany. It wasn't, and the class struggle set both countries (and the rest of Europe) back for centuries. We're quite possibly paying a similar price for Stalinism today.

It was a bit like The Tudors meet Dexter then? Bit disappointed to see Neil Jordan's and David Leland's...and John Maybury's names on this (Jon Amiel's just makes me do a little sad face)

If you'd told me, 20 years ago, this is what these firebrand directors would end up doing....I'd actually probably have gone "Borgias-cool!" More innocent times

At least it looks good and isn't about lawyers/detectives. Maybe it will give them the clout to make their own....who am I kidding. At least they're not starving. I'll put off watching Mona Lisa for a while