You Were Expecting Someone Else: Marcelo Camargo 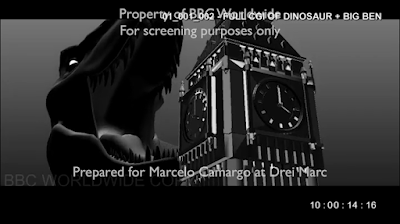 This post exists because my Patreon crossed the $310 mark. It's currently at $318.50, exactly $6.50 away from another bonus post like this on "Night of the Doctor," which will otherwise wait until the McGann/Eccleston book to be written. You can pledge to help make that happen here.

Or, to use your album/singles metaphor, these were the demos.

"And there are, in Season Eight, at least three moments where the specific circumstances of transmission matter to how the episodes are read..."

And, of course, one moment where it mattered to how the episode was finished - namely the removal of the Sheriff of Nottingham's beheading, which would have seemed poor taste in the light of contemporaneous world events. I wonder if, had a significant portion of the fanbase not seen the Camargo cut, the production team would have publicly announced this edit as they did. Or whether it would have been one of the many silent decisions they make, concealed to all until the inevitable Pixley archive.

Watching the leaked Deep Breath episode I remember being as excited, and as unable to contain that excitement, as watching the recovered Web and Enemy for the first time. It really did feel like something special, a once in a lifetime moment to be cherished; to the point that the Marcelo Camargo version of Deep Breath is the one that sits uppermost in my mind when I think back on the episode.

I was glued to the monitor, earphones in so as not to wake the family, sometime around midnight when the download finished, watching the pre-credits sequence a half dozen times before allowing myself the delayed gratification of the rest of the episode. Work the next day was forgotten, there was new Doctor Who to be absorbed. And Capaldi to marvel at. And wonderful meta dialogue to take in. And the Doctor and Clara in the booth seat... I watched it twice in a row, that first night.

My whole family went to the cinema to see Deep Breath on release. Everyone loved it. From my five year old son, to my wife, the very casual viewer. And so did I.

But it never replaced the first time. I was even vaguely disappointed with the proper score. The music from the leaked version was so indelibly scorched into my memory that it was the proper score in my mind.

A cherished Doctor Who memory. There are so many stretching back over the last forty years of my life. But the Marcelo Camargo leaked prints, oh yeah, that one was something else!

When the first few episodes of series 5 of Game of Thrones leaked I ended up not watching them, until the "correct" day. Partly this was in case they weren't finished, but also I just didn't fancy watching them all in one day, and then having to wait weeks for the next one.
Again, those leaks didn't seem to harm HBO at all, which does make one wonder how many 'leaks' are actually marketing.

At the TimeGate convention this weekend we debated this very topic. Most people watched the episodes, very few read them. Most people loved seeing the episodes in an unfinished state, not just to get their "fix," but because you rarely get to take that peek behind the curtain. For myself, I never managed to track down the rough cuts but I devoured the scripts eagerly, since for me it seemed like an unprecedented chance to visualize a new Doctor Who script for myself before seeing the finished product. A very small minority in the audience felt it was unethical to read or watch them beforehand, not due to spoiler concerns, but because it violates the authorial intent.

Yeah, I don't see there's any need for that. I've read thousands and thousands of words of (brilliant) stuff on this blog completely free, and I'm not going to throw my toys out of the pram just because, for one week, Phil asks for views from his female readership. No offence, but let's not be unnecessary.

Fine. I'm just touchy to that due to some other stuff that's gone on lately in that area, both in the news & personally.

I can promise you that I'm never going to do something like that outside the context of a Waffling post.

An obvious analogy I'm not quite sure how I missed. And one that resonates; Alex shares demos of most forthcoming Seeming tracks with me these days, and the thrill of watching his work go from initial idea to finished product is, I suspect, a non-trivial part of why he's my favorite band.

It's also notable that the show Empire (which I recently watched and loved) does some very interesting things with this dynamic, using the progression of a song from demo to finished version as a dramatic arc of its own, and generates some very effective dramatic moments from the sense of things clicking into place that hearing a finished version generates.

There was one instance where the workprint hurt the final version.

I was rather upset, watching the simulcast of "Deep Breath", when Peter Capaldi said "I've gone Scottish" and there were absolutely no bagpipes.

I never watched the leaked prints at the time, I was just keen to wait. I have tracked them down since along with the scripts and it will be fun as an artist myself, to explore the creative process of a product I love.

There are parts where I much prefer the music in the workprint. Like the creepy detuned pianos in the restaurant, and the ominous music in the spaceship under it.

I'm glad they didn't go with the bagpipes though

I'm rather glad there weren't, because that would have been deeply shit.

You don't owe many any promises mate. But thanks anyway.

"there were no meaningful negative consequences"

I suspect you are talking rot.

What about the (monetary) cost of dealing with the leak? (money that will never be spent on programming or talent)
What about the reputational damage to the parties involved, and the loss of trust between them?

"Unpublished" is generally so for a reason. Creative types prefer that the public see their best endeavours rather than the out-takes or rehearsals.

You may have done a draft of this blog, full of typos and factual howlers; would you want the world to see it? And how would you feel if, despite your objections, that draft was made public?

A very small minority in the target audience felt it was unethical to read or watch them in advance.