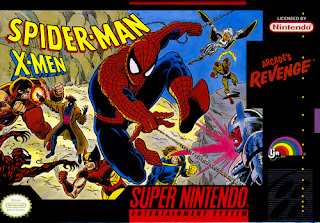 I love your thoughts on betrayal.

Anecdote: My son, a few Christmases ago, asked for the Doctor Who Wii game. Suffice to say there was a double betrayal.

A lot of lovely poetic prose in this entry. It makes it a bit difficult to read (especially the bit about Nemesis), but it ties into the themes well.

I'm not the least bit surprised that the game is crap. I mean, the fucking rainbow is right there on the box.

Thank you for finding an angle that at last makes Arcade remotely interesting.

Regarding your comments on the true fear of mutants stemming from their future state impinging on the present, it's worth noting that this was the tack Lee took with them from day one, decades before Claremont started playing with the race angle. The phrase "homo superior" appears in the very first issue, and in many others scripted by Lee, and it's only by issue #5 that we see the first anti-mutant mob form, as a track-meet crowd responds to Toad. Not because he's different, but because he supplants the putative "baseline" favourites in every single event.

By issue #14 (the first appearance of the Sentinels) newspapers are running hilariously overblown stories about how mutants threaten to take over the world, alongside a wonderfully insane "artist's interpretation" of the near future which posits not only that humanity will be enslaved, but that the world of fashion will be destroyed forever:

"If you want a vision of the future, imagine a black fur-lined pixie boot stamping on a human face - forever". Of course, my fellow Britons and those overseas who keep up with our spiralling crises can be forgiven for wondering how long it will take for this story to be re-run with Jeremy Corbyn wearing the Miniskirt of Oppression.

(Just as a further parenthetical point, I'd note that the fear of replacement does itself play into a racism metaphor, as evidenced by the number of Republican politicians performing spit-take after spit-take as white people find their majority status beginning to crumble. I'm not suggesting you missed that, but I thought it might be worth pointing to in comments.)