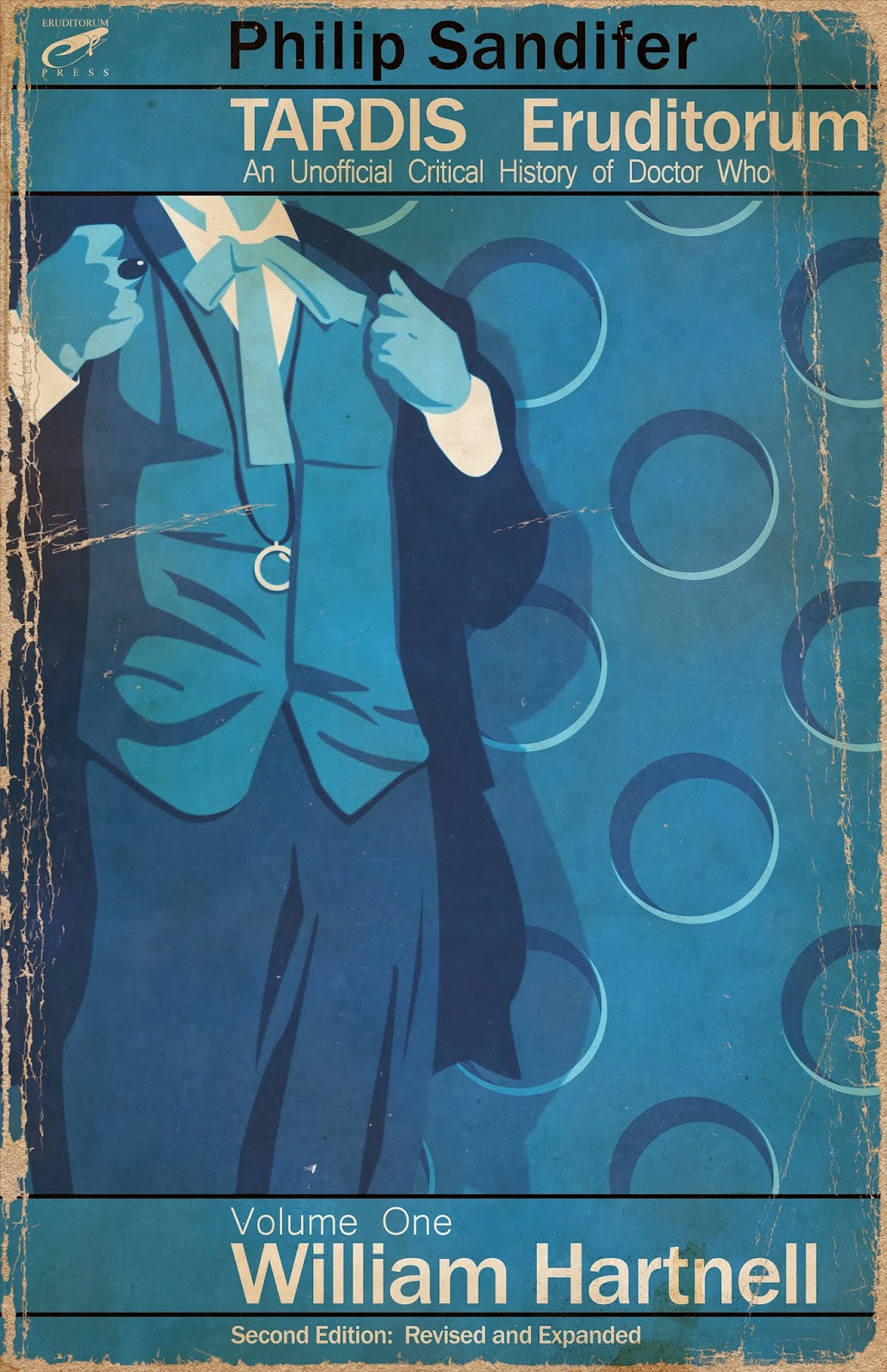 This is the first volume of collected essays from my blog TARDIS Eruditorum, which provides an ongoing critical history of Doctor Who. Which is to say, it's a history of Britain, or at least some aspects of Britain, as told through the lens of Doctor Who. This book covers all of the stories featuring the First Doctor, or, as he was the entire time he was on screen, simply The Doctor. It looks at the growing counterculture of the 1960s, the role of the alien and the weird, and the nature of early BBC television. It also contains my post on The Celestial Toymaker, in which I accuse a beloved piece of children's television of being racist crap and get a lot of links for doing so. Fully revised as of January 2014, with bunches of new essays and corrected typos and a cover by James Taylor, discussed in the blurbs for later volumes.

But if you want to grab a copy, you can buy it atAmazon and Amazon UK. You can buy it at other Amazons as well, and I leave it to you to discover which ones. I you want it for a non-Kindle eReader, at Smashwords. It's also up at most other major ebook retailers like Barnes and Noble, Apple, and Sony. Again, I leave it to you to figure that out. I have no preferences where you buy it - my royalties are pretty much equivalent for every version. 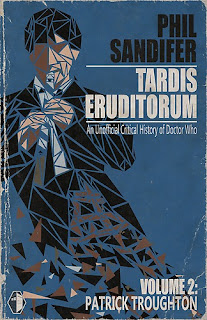 In a stunning feat of numbering, this is the second volume of collected essays from TARDIS Eruditorum, which still does all the critical history stuff I said in the William Hartnell book description up above. This one covers the Second Doctor, Patrick Troughton. It's about psychedelia, radical leftism, and sea monsters, as all good things are. It also contains my post on The Mind Robber, which is one of my most read posts due to it suggesting a very silly but rather entertaining alternate continuity for Doctor Who.

The cover design is by the utterly fantastic James Taylor, who talks about the process here. He will not sing "Fire and Rain" for you no matter how much you ask, because he is not that James Taylor. Unlike the Hartnell book it's not in dire need of an update for the purposes of quality control, and you can go ahead and buy it with the knowledge that it will not be getting replaced any time soon.

Much like the first volume, it's available in a variety of places and formats including Amazon,Amazon UK, Smashwords, and most major ebook retailers. 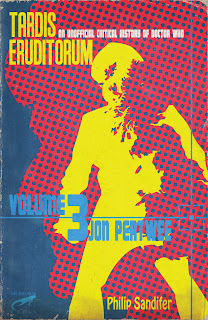 Doing all sorts of terribly surprising things with sequential numbering, this third volume of collected essays from TARDIS Eruditorum is much like the first two, only about the Third Doctor, Jon Pertwee. It's about glam rock, colour television, and drag action heroes, and is newer than the others. It also contains my mildly infamous post on The Three Doctors, which is full of references to William Blake and is apparently a bit difficult to get through. It helpfully also contains an explanatory essay about my essay written by someone who has never read William Blake or seenThe Three Doctors.

Its cover design is also by James Taylor, who is still not a musician, but who talks about the cover design here.

In the name of consistency, it's available at Amazon,Amazon UK, Smashwords, and most major ebook retailers. Much like volumes one through three, this fourth volume of collected essays from TARDIS Eruditorum covers the Fourth Doctor, Tom Baker. In a change from previous volumes, however, it only covers the first three years of his time, due mainly to him having been the Doctor for a rather long time. It contains my impressively long essays on The Deadly Assassin, and two of my personal favorite essays on The Brain of Morbius and on Mary Whitehouse.

As ever, it features a cover by James Taylor, who, as ever, blogs about his process in designing it, this timehere.

In news that will surely surprise nobody who has read any of the previous blurbs on this page, the book is available at Amazon, Amazon UK, and Smashwords I imagine you've got the pattern under control at this point. This book covers the remaining four years of Tom Baker's tenure on Doctor Who. It's about punk rock, Douglas Adams, and things starting to go very, very wrong, both on Doctor Who and in British politics. It contains the kabbalistic choose-your-own-adventure pastiche I wrote about Logopolis, and a book-exclusive interview with Gareth Roberts about his favorite era of the classic series.

The cover design is by James Taylor, of course, and he talks about what is, frankly, his best cover yet here.

You can get the book at Amazon, Amazon UK, andSmashwords. Recursive Occlusion: An Occultism of Doctor Who
From the pages of TARDIS Eruditorum springs this, my definitive statement on the alchemical and occult themes ofDoctor Who. Featuring a nearly completely rewritten version of theLogopolis entry from TARDIS Eruditorum Volume 5, with thirty all-new nodes to land on in your interactive exploration, the book is carefully designed, from cover to typeface, to resemble a certain line of interactive fiction books first published in the 1980s.
Inside is a strange mystical quest - a narrative of spiritual ascension in which you get to choose your own path, encountering a differing set of hallucinatory visions and proclamations about the nature of Doctor Who depending on the choices you make.
As ever, the cover is by James Taylor, who talks about it here. The book is available exclusively from Createspace. 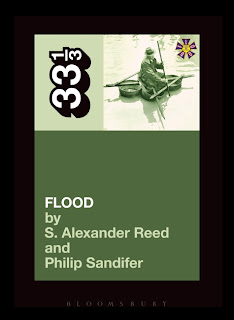 Co-written with the quite wonderful S. Alexander Reed, this book is for Bloomsbury Academic's 33 1/3 series, which features short pop-academic analyses of popular music albums. This one tackles They Might Be Giants' seminal 1990 album Flood.The book looks at Flood as a touchstone of a particular phase of American geek culture, and asks how it is that a pair of Lower East Side hipsters ended up becoming geek icons. It also manages to discuss Douglas Adams, the pre-World Wide Web Internet, the geological history of Massachusetts, childhood psychoanalysis, andKing's Quest V. So there's surely something to interest you here, yes?

It's out and available form Amazon here, and Amazon UK here. 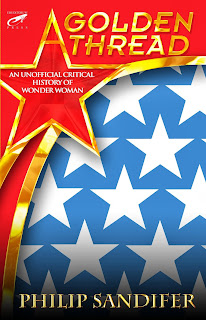 A critical history of Wonder Woman comics, starting from the World War II era and moving to the present day. Wonder Woman is one of the most recognizable icons of feminism in American culture. And yet she's often seemed like an afterthought, or even like an irritation to DC Comics.

In it, you'll find a detailed analysis of Wonder Woman's earliest days as a propaganda figure for her creator William Moulton Marston's female supremacist bondage utopia - one that puts her in the context of Marston's academic work, and of artist Harry G. Peter's interest in an old-fashioned aesthetic owing much to the British decadents. You'll learn how one of the most feminist eras of Wonder Woman ever came to a screeching halt because Gloria Steinem didn't like it. And you'll find out how Wonder Woman fits into DC's current "New 52" initiative.

Written to be enjoyable both by die-hard Wonder Woman fans and people who have never read a Wonder Woman comic in their lives, it's on Amazon, Amazon UK, and Smashwords.

Vaka Rangi: In the language of the Rapa Nui, A Canoe for the Stars

Completely revised and expanded from the blog of the same name, Vaka Rangi Volume 1 includes critical analysis essays on every episode of Star Trek, Star Trek: The Animated Series and Raumpatrouille – Die phantastischen Abenteuer des Raumschiffes Orion. Each story is re-positioned within its cultural contexts and re-examined through the lenses of utopian philosophy, cultural anthropology and anarcha-feminism.

Available from Amazon as a paperback or DRM-free Kindle ebook, from Createspace in paperback, or from Smashwords as an epub.