One thing has become clear: Clint Eastwood is actually a deeply left-wing, anti-imperialist auteur with a profoundly sceptical and cynical attitude to America, war and patriotism.
It's the fake baby that proves it. 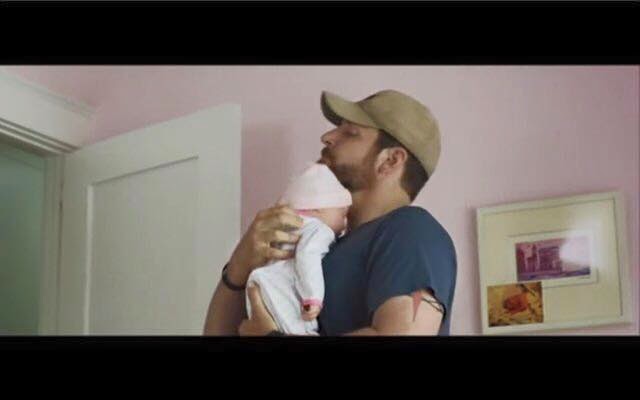 A sentimentalised emblem of American family life... represented on screen as something blatantly unreal, synthetic, cheap, ersatz, evidently and transparently fake... and yet none of the ostensibly admirable icons of American values notice it!  Instead the fake baby is cooed over like a beautiful, perfect, inspirational, precious, living child... even as Bradley Cooper (who must have been in on Eastwood's satirical joke at the expense of red-state America, the Pentagon and all so-called 'Heartland values') brazenly waggles the mannequin's little plastic hand and pretends the baby is moving by itself.
Let's repeat that: he pretends the baby is moving.  In this we see not only a Swiftian subversion of the exploitation of children as a lachrymose pavlovian trigger for tears of jingoistic pride in the eyes of America's right-wing ideologues, but also a deeply disturbing reminder of all those babies - blown to pieces, dissolved in white phosphorous, or starved - who will never move on their own ever again thanks to the rampant violence of American military adventurism.
The symbol of America's bright and moral future is literally a dead, hollow, plastic replica... and none of the characters notice.  Too brainwashed by flags and Fox News and the 4th of July to see the cold, lifeless truth even when they hold it.  And the idealised American child, the child of the patriot who has killed again and again for the US imperium, is also a reminder of the countless really dead babies that America has left in its wake across the globe.
Moreover, we - the audience - are evidently supposed to pretend we don't notice.  And he's tricked loads of reactionaries into doing just that.  Praising this superficially jingoistic, neo-con movie while silently passing over an insultingly blatant (and, on the face of it, ludicrous) piece of diegetic disruption.
Eastwood - who is obviously secretly more far-left than Michael Moore - has trolled the entire country.  He's even trolled those critics who have pointed out the fakeness of the baby!  Do they think he doesn't know it's obviously fake?  How myopic are these people?  How myopic are the liberal critics of the film who have totally failed to comprehend the depth of Eastwood's scabrous, scathing subversion?  Eastwood has placed a blatant and horrifying truth about fakeness and sentimentality right in front of the entire United States... and he has stood back and let us watch as they all fail to see it.
It's Eastwood's most ascerbic bit of leftist absurdism, his most acidically situationist bit of surrealist theatre since the talking-to-the-empty-chair masterpiece (a performance of inspired performative lunacy that he managed to trick the GOP into letting him do on stage at their conference!).
It's also possibly the most devastatingly subtle - yet also furiously dyspeptic and radical - comment on modern America in recent cinema.
Comrade Eastwood, I salute you.
Share on Twitter Share on Facebook

Eastwood just stole it from Robert Holmes's brilliant use of bubblewrap to symbolize how the entire utopian sci-fi construct of The Ark in Space is just the logic of the Autons writ large.

Ahhh, 'Logic of the Autons,' that classic ep about American foreign policy.