"Does this mean that the Olympic Dream is dead?

Heartwarming, I'm sure.  Absolutely certain to inculcate desirable attitudes in children.  Watching that will have them all full of hope and courage and love as they quaff their isotonic drinks and get exercising, hoping to one day be standing to attention as their national anthem is played and a bit of metal is draped around their necks, secure in the knowledge that all is for the best in the best of all possible social and political cultures.

On the other hand...

On 19 May, the Olympic torch will begin its journey, accompanied by 52 police officers, due to fears that the torch may be ‘targeted by radicalised protest groups’ or dissident Irish republicans, since according to the Telegraph ‘ experts on the IRA are warning the torch relay is vulnerable to attack.’

Other threats include ‘public disorder’ – a possibility that was identified as a risk after last August’s riots by assistant police commissioner, Chris Allison, the national Olympic security co-ordinator.

To eliminate these threats, the military/police ‘ring of steel’ around the Olympics will be buttressed by security infrastructure that includes an £80 million, 11-mile, 5,000-volt electric fence around the Olympic Zone, and a range of new surveillance and monitoring technologies in London itself.

The largest peacetime security operation in British history cannot be simply attributed to paranoia and an overzealous desire to protect the public. On the one hand it reflects an overlap between homeland security and corporate profiteering that has become a feature of the post 9/11 world.

As the urban geographer Stephen Graham has observed, the Olympics are ‘the ultimate global security shop window through which states and corporations can advertise their latest high-tech wares to burgeoning global markets while making massive profits’.

The Games also represent a more general marketing opportunity for their corporate sponsors. In 2006 Parliament passed the London Olympic Games and Paralympic Games Act, which upgraded the level of brand protection to Olympic sponsors and made any unauthorised marketing or commercialism connected to the Olympics a potentially criminal offence.

This highly profitable, publicly subsidised, sporting event always attracts the major, and wannabe major, cities of the world, using any and all methods to entice an unaccountable Olympic committee, each flexing their political muscle to ensure theirs is the next chosen location. The Olympics take billions of pounds, yen, dollars of their host countries’ tax revenue to build magnificent stadiums and housing facilities, militarise the city, trample civil liberties and construct elaborate installations with shelf lives of a few weeks.

London 2012, originally expected to cost £2.4bn, is now projected at £24bn, with contracts going to some of the world’s most egregious employers and global human rights violators. Some on the left have been critical of the massive transfer from public to private at a time of austerity. The London overspend has been portrayed by officials as a one-off, but a glance at the history of the Olympics shows that underestimating the cost is a consistent part of the Olympic experience.

But the real gains for the rich can be witnessed in the long-term implications, once the crowds have gone home. Contrary to popular belief, the devastation inflicted on the poorest and historically marginalised communities is not simply an adverse side-effect, but goes to the very essence of why cities battle to host the Games.

In recent days attention has been given to London’s policy of ‘cleaning the streets’ of sex workers and other undesirable elements in the lead up to the games. This should come as no surprise to students of history, and if the past two decades are any indication, this is only the beginning of a comprehensive strategy to restructure the character, makeup and politics of the city. Everywhere the Games injects itself, the story remains the same; beginning with the easy targets – sex workers and the homeless – the decision-makers soon move towards driving out ethnic minority and working class residents from their city.

Why are McDonalds and Coca Cola the official food and drink partners of the London 2012 Olympic Games when these companies represent the antithesis of both healthy and sustainable food and drink? Why has BP been selected as one of six “sustainability partners” when its business assumptions imply a world of runaway climate change?

The apparent unwillingness to apply any of the Olympics’ supposed ethical principles to the selection of corporate sponsors, brushing aside numerous civil society complaints and campaigns, is certainly one thing that the games can claim to be consistent about. Official sportswear partner Adidas produces its goods in sweatshops. Communications partner BT has links with Bezeq, which provides telecoms to illegal settlements on the West Bank. Coca Cola is accused of draining and contaminating groundwater in a drought-prone area of India. And so on.

And so on indeed.

So... hope, courage and love.  And bullshit.  And dystopian social control in the service of corporations.

But the greatest of these is bullshit. 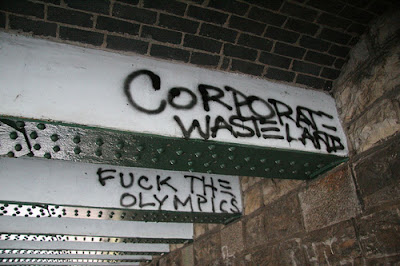 Makes sense that the torch-bearers are flogging their giant golden cheese-graters on Ebay...

It pretends to be all about sport and British pride, but really it's all about money.