This is genuinely hard for me to take in.

His performance as Solon in 'The Brain of Morbius' is burned into my memories of childhood.  I imagine that's true of many of us Who fans who grew up in the VHS years.

And there's the slimey, posh, ruthless spiv Brockley in the film version of Dalek Invasion.

Later, of course, (later for me, I mean) there was the War Lord.  A totally different entity to Solon.

Solon is flamboyant, jittery, vain, pompous, self-consciously machiavellian (to his own immature delight) and deeply inadequate as a person.  Madoc's performance always dances just on the knife edge of comedy without ever quite tipping over.  Solon is the quintessential jumped-up and zealous servant.

The War Lord, by contrast, is cold, introverted, calculating, quick, almost feline.  The mask of control occasionally slips, showing glimpses of the sociopath beneath.  The quintessential tyrant.  And yet, he is human.  Look at the way he shows quiet outrage over the murder of his incompetent compatriot, the Security Chief.  Look at the little moment, after the Time Lords have tortured him into compliance with their court, when he regains his dignity by straightening his tunic before he turns back to face them.

And then there's the weary, doubtful, morally-queasy yet cowardly Fenner.  Madoc's performance radiates lip-chewing ambivalence and tired timidity masked by the persona of the cynical old pro.  I, personally, am glad he didn't get the role of Thawn.  His Fenner is more interesting.  He gets to spar with Tom Baker over the word "progress".  He gets to look embarrassed when he's left at the mercy of the natives that, quite understandably, hate him.

These are, undoubtedly, among the finest guest performances in Doctor Who.  Including Fenner.  (We'll just gloss over Eelek in 'The Krotons'.  It's fine.  He does what needs to be done with what he's got.  The essence of professionalism.)

But he's also burned into my memories in another way.

In the early 90s he toured with the RSC in Trevor Nunn's legendary production of Measure for Measure, alternating with a stage production of The Blue Angel, based on the 1930 von Sternberg movie which starred Marlene Dietrich.  Madoc played the Duke in the Shakespeare and Professor Raat in The Blue Angel. 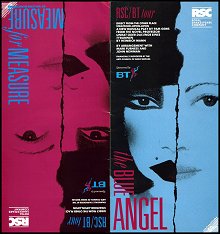 I won't go into the details of the productions.  The point here is that the Measure for Measure was the first live Shakespeare I ever saw.

Madoc's Duke was amazing.  He's still the benchmark by which I judge the character.  When I read the play, I hear the Duke's lines in Madoc's voice.  I can precisely recall the way he inflected certain crucial lines.  I can exactly recall the way he modulated his characterisation between empathy, judgement and detached, almost clinical, interest... invoking the psychoanalysts of the Freudian Vienna in which Nunn had set the play.

And I - the fanatical young Doctor Who fan - didn't recognise him.  (I wasn't, at that point, the type to be much interested in the names of actors.)

It wasn't until I next watched my edited-down VHS of 'The Brain of Morbius' that I realised I'd seen Professor Solon in the flesh.

He'd fooled me.  Me, who'd watched him transplant the brain of a war criminal about a thousand times.