How Curses Work 2: This Fez is Loaded

The utility to Western imperialism of depicting Arabs with the kind of culturalist discourse of modern vs. pre-modern, secularism vs. cultish religion, democracy vs. theocracy, civilisation vs. medievalism, rationalism vs. fanaticism (translated out of code: good Westerners vs. bad Arabs) that followed in the wake of the "war on terror" is obvious.

This way of constructing Arab and/or Middle Eastern cultural identities in Western art, literature, media and ideology, is very old.

Edward Said's seminal book Orientalism outlines the way in which the West has constructed the East as an exotic, romantic, cruel, sensuous, decadent, fanatical, inscrutable Other.  (...though it is occasionally weakened - in my presumptuous and insignificant opinion - by the problems underlying Foucault's notion of 'discourse', which Said utilises.)

Jack Shaheen's book Reel Bad Arabs reveals how Hollywood has vilified and dehumanized Arabs.  Here's a great short documentary demonstrating his thesis.  It's central message may not come as a surprise to you, but it's still salutary to see the evidence collated and concentrated.

Such representations of Arabs pop up in the Doctor Who story 'Pyramids of Mars' (1975) as part of the show's tactic, at that time, of raiding the motifs of the pop-gothic... with Hammer as a major influence.  The Hammer version of The Mummy is the place, above all others, where the Egyptian Fanatic (that character we were talking about in the previous post) is best seen.  The character in that film, played by George Pastell, is the template for Namin in 'Pyramids of Mars'.

Namin is a murderous, raging fanatic.  He goes one better than Pastell's character in the Hammer Mummy: he actually takes over the English country mansion of the Explorer, invading it using forged (or coerced) letters of authority from the Explorer, taking up the Explorer's place, raging at the Explorer's servant, barring the Explorer's brother, insulting and shooting the Explorer's friend, etc.  Inverting real history, the Egyptian invades England, violently taking over.  Terrance Dicks' novelisation makes it clear that Namin is the last in a long line of fanatical worshippers of the old gods, as per standard stereotypes.  At one point, Namin even insinuates that Dr Warlock is being racist - or at least xenophobic - in suspecting him of nefarious activities, asking sarcastically if Warlock will report him to the police for being "a foreigner".  Warlock then gets to smash such petty and self-serving nonsense aside.  Don't bring up racism; I only suspect you because you're a wrong'un.  Thus is the depiction of the Arab as a sinister, fanatical invader self-alibied, self-excused... with all criticism automatically and pre-emptively effaced in a "Political correctness gone mad!" moment avant la lettre.  It's a moment when Doctor Who itself says "bloody minorities, coming over here... and then squealing about 'racism' when we complain about what they get up to!"  It's one of the ugliest moments in the history of the show. 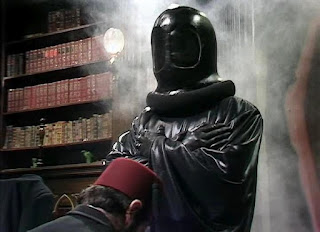 But Namin isn't just an evil Arab.  He's an evil religious Arab.  In the original version of his essay about 'Pyramids of Mars' at his TARDIS Eruditorum blog, Philip Sandifer (while, it should be stressed, criticising the use of nasty stereotypes)  accidentally referred to Namin as a Muslim... and got taken to task for it in the comments.  With good grace, he admitted and corrected the slip.  Thing is... was it really so off the mark?  Okay, Namin worships Sutekh not Allah... and, by extension, he believes in the other Egyptian deities, making him a polytheist... which puts him well outside 'really existing Islam', which is clear about there only being the one god, Allah.  I'm not saying that Namin's beliefs or practices, as they appear in 'Pyramids of Mars', bear any relation or similarity to Islam.  They don't.  Quite the contrary, in fact... which is kind of the point.... because, despite being so self-evidently NOT a Muslim, Namin as a character is still semiotically depicted in terms which carry connotations of Islam in Western Orientalist discourse.  His very fanaticism is itself a signifier often used to connote Islam in such representations.  His fez, which the text directly and explicitly connects to the ethnic and religious identity of the character - i.e. Arab Fanatic - is a cultural artifact of the Ottoman Empire, an Islamic political entity.  He does a lot of kneeling and bowing, a lot of raging at unbelievers who dare to trespass upon his private religious practices... all while being a fez-wearing Arab.  And, at the time 'Pyramids of Mars' was made, 'Muslim terrorism' was a much-hyped fear in the West.  (Nothing changes, does it?)  At that time, as now, the word 'Muslim' was frequently taken as more or less synonymous with 'violent religious fundamentalist with an axe to grind' in the media culture of the West.  (The only real difference nowadays is that, unlike most forms of racism, it's more or less acceptable to openly practice Islamophobia.)

Admittedly, 'terrorism' in the 70s was as associated with the IRA and Baader-Meinhof, etc... but there was also the PLO and the memory of Black September... all endlessly condemned in the Western media without anyone bothering to go on at equal length about much-greater Israeli and Western atrocities committed against Muslims.  The heyday of 'Muslim terrorists' in Western pop-culture was still in the future, of course... it arose in the 80s and 90s, along with the need to demonize post-revolutionary Iran, paint Libya as the ultimate rogue state and discredit Palestinian 'peace offensives'... and reached its apogee after 9/11 for obvious reasons.

Even so, there is no doubt what Namin - a fanatical, fez-wearing, gun-wielding, Westerner-killing, religiously-observant Arab - MEANT in 1975.  The fact that his stated religious beliefs and practices are about as far from Islam as can be imagined only adds insult to... well, insult.

To be honest, I find it amazing that George Pastell wasn't cast as Namin.  He was the go-to guy for such characters.  I suppose they didn't want to draw too much attention to how derivative of Hammer's first Mummy film 'Pyramids' really was.

Pastell, of course, had already done Who duties, playing a fanatical, generic foreigner who schemes to open ancient tombs and release hideous, stomping, undead zombies who will - he thinks - do his evil bidding, in 'Tomb of the Cybermen'.

Klieg may not be an Egyptian (it's hard to say what he's supposed to be, apart from a generic 'foreigner'), but the presence of such a character, played by an actor who had played the Egyptian Fanatic for Hammer in the past, is part of that story's recoding of the Curse of the Mummy's Tomb-type tale.

I've looked elsewhere at how 'Tomb of the Cybermen' takes on all sorts of racist connotations by recycling, in terms translated into sci-fi, the tropes of colonialist gothic horror, tropes that were augmented forever in popular awareness by 'Tutmania' during the 20s and 30s, in the wake of the 'discovery' of Tutankhamun's burial chamber.

In 'Tomb', the ancient subterranean stone burial chambers of Mummy films become technological freezers.  "Abandon hope all ye who enter here" becomes the electricity coursing through the big doors.  The curses upon those who disturb that rest of the Pharaoh / Princess / High Priest become a long-ago formulated Cyber plan to snare new recruits.  The buried treasures become the power that Klieg and Kaftan hope to co-opt.  The faded, dusty friezes become the Cyber icons that decorate the walls.  The sinister hieroglyphics become the cryptic patterns of symbolic logic.  When Klieg (with the inexplicable assistance of the Doctor) manages to work out the logic sequences which open the doors, he is also translating the magic "open sesame" contained in the sacred, arcane symbols of a tattered scroll.

Wise words from me there.

The casting of Pastell is part and parcel of this very same recoding.  I'm not dismissing his abilities as an actor, but all actors know that there's a lot more to getting cast than just how good you are.  Pastell was drafted in to play the Fanatic  in 'Tomb' because he'd already played Fanatics in things with 'Tomb' in the title.  In short - because he looked right.

Islamophobia isn't a form of racism, unless you think that all Muslims are the same colour. Which they aren't.

Of course it's a form of racism. The "it's not 'racism' because Islam isn't a 'race'" defence is bullshit.

At the risk of sounding somewhat bloodthirsty I'm really pleased to see someone else take "Pyramids of Mars" down a couple pegs. That's one of the most unjustly overrated serials in the show's entire history and you've done a great job pointing out one of the primary reasons why.

I think "Pyramids" showcases the major fault with the Phillip Hinchcliffe/Robert Holmes era to a T, namely, the callous disregard towards the implications their words and actions have and their utter refusal to take their metafictional genre mashup excess to the next level and actually use the format of Doctor Who to make some postmodern commentary about the styles they revive. That's why they were so set on doing a "Blood From The Mummy's Tomb" remake they ignored the blatantly racist overtones of the shifty middle eastern Hammer archetype and they do the same thing in "Talons of Weng-Chaing" by ignoring the inherent racism of Fu Manchu because they were so chuffed about how clever it was to do a Fu Manchu vs. Sherlock Holmes pastiche. Also, can I bring up Leela? Her entire character's a whole can of worms unto itself. Another example of Hinchcliffe not quite thinking things through to the extent he probably should have.

In less racist examples, this is why they didn't stop and think about the consequences of the brutal violence in "Seeds of Doom" and "The Deadly Assassin" might have with Mary Whitehouse hovering about and why "Robots of Death" turns into a less-interesting version of "The Naked Sun". The obvious thing (at least to me) would be to use The Doctor's transgressive nature to invade and then comment on the stories he falls into: Point out how racist, inaccurate and problematic characters like Namin and Sin are, for example, or how Terran Capel's plan makes no sense. But maddeningly, Hinchcliffe and Holmes put The Doctor in the lead role replacing the main characters of the original story thereby preventing the possibility of anything actually interesting being said.

This era of the show is simply one of the most frustrating for me: Occasionally magnificent, usually baffling and more often than comfortable shockingly irresponsible to the point of series-derailing catastrophe.