This is a slightly edited and expanded version of something originally published in the April 2011 issue of Panic Moon.  Many thanks to Oliver Wake, the Editor, for commissioning it.

When the Doctor first encounters the White Guardian, we are encouraged to think – just for a moment – that the TARDIS might have been waylaid by God himself. Nothing so grand (or potentially offensive), as it turns out. However, the White Guardian is clearly a powerful, godlike entity. Yet he is suavely seated, sipping crème de menthe, as the Doctor stays on his feet.

Later, when we encounter the White Guardian again, he and his opposite number sit at a table on Wrack’s ship, while everyone else stays standing.

I wonder if you, Constant Reader, have ever noticed how often ‘gods’ in Doctor Who are depicted sitting? Sutekh spends most of his story sitting. Indeed, that’s his problem. The Keeper of Traken has to sit for thousands of years in a chair, but that’s the price of being the patriarch of an entire empire, able to flit about the universe at will... and meanwhile, all the Melkur wants to do is to finally take a seat.

In 'The Trial of a Time Lord', the judges who will decide the Doctor’s fate, the “supreme guardians of Gallifreyan law” who’ve enjoyed “ten million years of absolute power”, never rise from behind their benches. The dimension behind the Psychic Circus is presided over by the Gods of Ragnarok, who seem to be stone idols, carved into an eternally seated posture. 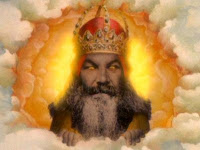 I think, on one level, this has to do with the deep link between ideas of divinity and royalty. For centuries, monarchs (who have been absolute autocrats until relatively recently in history) have styled themselves “little gods on Earth” and claimed the “divine right of Kings” (though it should be said that this notion declined somewhat in Europe in the face of the political realities of the Middle Ages, only to be consciously revived, perhaps most especially by the Stewarts). Such caveats being assumed, it's fair to say that the idea of god/s has long been utilised as ideology by monarchies. The Pharaohs claimed to be divine. Roman Emperors got up to the same thing (though they tended to be deified only after death). Like Monarch (the frog-god-king in 'Four to Doomsday' who spends most of his time imperiously enthroned) they sometimes believed their own propaganda.

Conversely, we may also draw our conception of God from our experience of kings. In 'Pyramids of Mars' the Doctor says that “Egyptian culture” was “founded upon the Osiran pattern”; in reality, the Egyptians probably partly derived their notions of feuding gods from their experience of their royal dynasties.

This is all pretty obvious really. You could fill books (and people have) with the ideological connections between royalty and religion. However, like a lot of obvious things, it can sometimes be a bit too much of a given, and thus fly under our radar. Like so many normative assumptions, it goes without saying. But just think about school. When you listen to the hymns and carols that children are still made to sing, you hear a lot about thrones, crowns and sceptres. 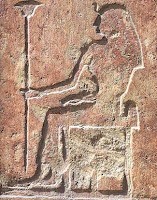 Doctor Who hooks into the visual aspect of the tradition, which is also part of a tradition of ideas. Gods in the show (or godlike entities, if you want to be pedantic) tend to be seated because of the longstanding tradition of depicting gods as enthroned. Indeed, in Sutekh’s case this appears to have been conscious: in his paralysed state, his appearance and posture clearly recalls depictions from ancient Egyptian friezes.

But Sutekh does something besides sit. He watches. This is something else that gods in Who tend to do. The Time Lords watch the Matrix – indeed, their whole culture seems obsessed with watching; they have a Panopticon (literally, a place where all can be seen) and an Eye of Harmony. The Guardians watch and recruit agents but “must not be seen to act”. The Gods of Ragnarok spectate at the Psychic Circus.

Moreover, the Time Lords and Sutekh both watch on screens. The Keeper of Traken borrows the TARDIS screen. Monarch watches the surveillance from his omnipresent monopticons on a screen. This suggests more than voyeurism; it suggests audience. The Ragnaroks even use a stereotypical nuclear family - seated in the big top - as avatars.

This all hints at a fearful inner theology of the show: a worshipful terror of the audience as a powerful, judgemental, scrutinising, outside force.

This isn’t new. In many theatres, the highest circle is known as “the gods”, with all that this implies. To respect a god is to be 'god fearing', after all, to fear what he can do to you by withdrawing his favour. In the down-at-heel Psychic Circus (long recognised as a metaphor for Doctor Who itself) you must entertain the petulant, demanding, autocratic audience or die. Clichés aside, the programme makers want us on the sofa, in front of the TV. Bums on seats or damnation. Our power to switch off makes us frighteningly omnipotent.

Fear of the audience becomes more marked towards the end of the classic series, for obvious reasons, with many examples of recumbent voyeurs who watch and pass judgement on the Doctor. There is Arak and Etta, Davros and the DJ, the Trial judges, etc. It isn’t hard to figure out a connection between this and dwindling viewing figures and hostile BBC bosses. Maybe the confidence of the reinvented show about its audience in 2006 is expressed in 'The Satan Pit', which depicts the Beast as standing up... as well as overpowered and chained firmly in his place.  Share on Twitter Share on Facebook

Doctor Who's best depiction of God was in, of all things, Terminus. At the end of episode three, the Doctor discovers the corpse of the guy (seated, again) who, by ejecting unstable fuel rods, unintentionally ignited the Big Bang. The Universe was created by mistake, and the guy that did it is dead. God is dead and the Universe is meaningless. Gosh.

Thank you! I'd forgotten the Terminus pilot!

It's such a superheavy concept for such an uneven story (the Garm, the raiders who look like the Thompson Twins and their giant bubble helmets, Nyssa's 'oops my skirt' moment, etc), I almost wonder if even the writer understood the theological implications.

The Terminus novelization is one of the absolute best Doctor Who stories ever, so yes, I think Peter Gallagher (pseudonym John Lydecker) knew what he was doing. That the TV performance destroyed the novel's characterization, psychological depth, and pace while looking horrible is a separate issue altitude.