“Sooner or later you're gonna have to choose whose side you're on.”: Year Four # 2 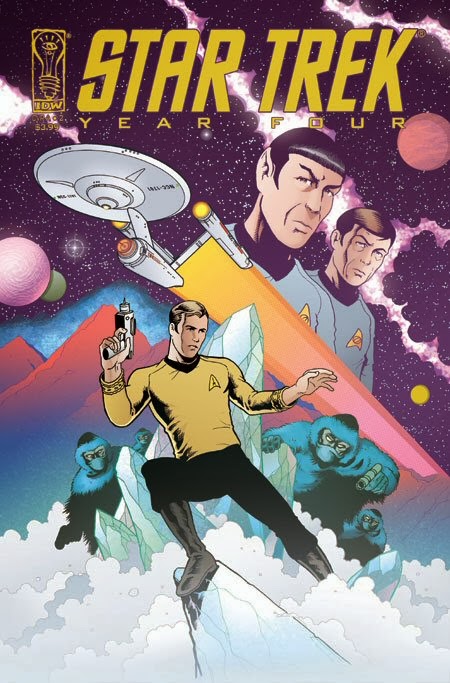 An obvious thing for a series like Star Trek: Year Four to do would be to take some of Star Trek's familiar motifs and refine them a bit. It doesn't necessarily have to “update” them for “a modern audience” because that's such an overused and cliched expression, but it can sometimes be helpful to give a little nod to the fact that, say, this series is being written in 2007 instead on 1969. And, with its second issue, Year Four does pretty much that: This story is very much like what I'd expect Star Trek in 2007 to look like.

Or, perhaps more accurately, what Star Trek made against the cultural and political backdrop of 2007 would look like. On a pit stop to Aarak 3, one of the Federation's largest suppliers of Dilithium crystals in the galaxy, the Enterprise crew has the briefest of moments to reflect on how different the planet is since the Federation signed a mining agreement with the local government before they are attacked by a group of terrorists who try to blow the place up with a handheld explosive. The terrorists are part of a resistance group known as The Traditionalists, who feel Aarak's alliance with the Federation is a betrayal of their culture's fundamental beliefs, in particular the belief that Dilithium is a magickal substance and that in mining and selling it, the ruling classes are draining the planet's spiritual essence. This leads to a minor Prime Directive debate, as while supporting the aristocracy to secure the Dilithium would constitute interfering, the Traditionalists hold that the Federation has already violated the Prime Directive by giving one side the technology needed to turn it into a mining superpower.

So there's more to discuss in this story than there was last time, but let's first address the two things that predictably made me upset right from the get-go. First of all, yes, it is exceedingly difficult for me not to immediately side with the Traditionalists. Stand-ins for an indigenous populace angry that their culture is being stripped away from them due to the encroachment of material and ideological Westernism? Yeah, sign me up. There's no way I'm not going to be sympathetic to that. There's also the little matter of the Dilithium crystals being sacred totems, which the story painfully glosses over. Spock makes a comment about how “there is nothing magical about a matter-antimatter reaction” that absolutely rubs me the wrong way, and no real effort is made to make up for this. Kirk stops Spock from being even more offensive and later there's a scene where Scotty describes how “magical” it is to bring life to his engines, but that's a cop-out, isn't it? That's the smarmy, substanceless Disney version of magic. That's not spiritual and symbolic power, that's something you put on a mass-market greeting card that you sell for $5 at a tourist kiosk.

I mean, Star Trek wasn't always great at magick to be sure, especially early on. There were a frankly appalling number of stories where the Enterprise crew waltzed in to tell people how backwards, superstitious and primitive they were. But, starting in the third season, there was the beginning of an inkling that the show might actually be able to do better than that. “The Tholian Web”, “Wink of an Eye” and even “The Mark of Gideon” to an extent started to play with the idea of looking at the spiritual and the supernatural within the context of science fiction, typically with astounding results. I know the general consensus is that the third season was the crap one and maybe the creative team on Star Trek: Year Four wanted to return to what they saw as “proper” Star Trek of the sort that characterized the first and parts of the second season, but I'm just going to have to draw a line here. I firmly believe the magick of the third season is part of the positive legacy of that year, not the negative, and I'm going to forever disagree with anyone who posits otherwise.

Then there is, of course, the Prime Directive. Which I eternally hate, and will continue to point out that I eternally hate as long as Star Trek continues to do stories about it. The biggest problem with it is naturally that it prevents a show that really ought to be taking a stand and inspiring change and growth from diegetically taking a stand and inspiring change and growth. Star Trek has already proven it has the capacity to be imperialistic on many an occasion, so those sorts of concerns are now largely irrelevant. This really isn't that hard to reconcile: All you have to do is come up with a scenario where the Enterprise crew shows up, gets involved in a conflict and, through their actions and just by talking to people, gives them hope that there's a way out of their troubles. There. Why does it take over forty years to figure this out? This can even happen on an individual basis: You can show specific characters becoming inspired to change themselves for the better after being exposed to the idealism of Star Trek, or demonstrate how interpersonal conflicts can be resolved in a mature and constructive way. We saw this any number of times throughout the Michael Piller era, so it's not like it's some weird and alien concept.

There is, of course, a larger issue all of this ties into. And that's the fact this story is rather transparently a commentary on the United States' involvement in the oil-rich countries of the Middle East and the violence that has come to define that region to 21st century observers. The result of this is rather mixed, in my opinion: Likening the Traditionalists to the religious extremists that constitute so much real-world terrorism is rather a hideous overgeneralization and problematic on any number of levels, though it perhaps makes more sense and is fitting to have the oil industry stand-ins be callous, calculating money-focused proxy Westerners. Kirk also expresses a minor concern that it would be disastrous if the Klingons got hold of the Dilithium mines on Aarak as a Traditionalist-backed government would be most sympathetic to the Federation's enemies...Which is really troubling in this context as it gives a shot of Cold War paranoia to the proceedings and is an unpleasant reminder of how that mindset still governs the way actual leaders of real-world Western countries behave, and indeed how linked Star Trek is to it. One would hope the Enterprise crew could rise above that.

And they sort of do. The story's biggest strength, and also its biggest weakness, comes in the climax. After being briefly kidnapped by the Traditionalists and outwitting a plot to blow up the Enterprise, Kirk, Spock, McCoy and Scotty trick the terrorists into bombing the entrance to the Dilithium mine. This ensures nobody gets the crystals and the Enterprise crew promptly leaves, acknowledging this isn't a fight they should be involved in, washing their hands of the matter entirely and leaving the Aarakians to sort things out on their own. So, the book gets merit for recognising that Western powers shouldn't manipulate other cultures for their own ends, especially if their based primarily on exploiting the natural resources those other cultures happen to sit on, but also major demerit for essentially having the Federation duck out of its responsibilities. The Federation plainly made this mess themselves, or at least had a large stake in the matter, and simply walking away, while it was arguably the only right thing to do in this specific situation, doesn't really make up for wrecking the culture of the Traditionalists.

So I guess that makes this story an even better representative of doing Star Trek in 2007 than I initially gave it credit for. Kirk did the best he could under the circumstances and constraints he was placed under, but he didn't *really* make anything better or make up for the past transgressions of his people. What this story gets at is the limitations of both the original Star Trek and Western Modernity: It's had its good moments, but one can't help but think that it might be best if it just went away before it does any more harm to let something better take its place. Share on Twitter Share on Facebook