Advent of the Angels: The Great Adventure of the Dirty Pair 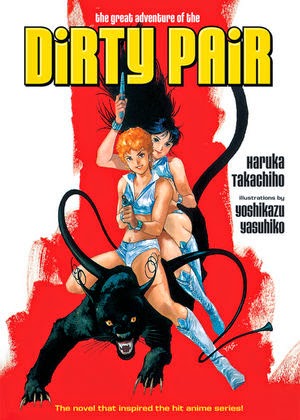 It seems at first glance obvious that I should cover anime and manga at this point in the project. After all, isn't the breakout of Japanese media in the United States a major part of the 1980s entertainment landscape and a defining event in the history of Nerd Culture? Well...not exactly.

Firstly, according to the observations and inferences I've personally made studying Nerd Culture, the foundational moment as it pertains to anime and manga didn't happen in the early 1980s and wasn't even due to the rising popularity of people like Hayao Miyazaki: Instead, it can be traced to the 1990s and Neon Genesis Evangelion (which was already a unique and transformative piece of anime in Japan) if you were a part of proto-Nerd Culture, or shonen (boy's action entertainment) stuff like Dragon Ball Z if you were everybody else (though some bleedover did occur).

And secondly, the Dirty Pair franchise, of which The Great Adventure of the Dirty Pair (actually, a compilation of the first two Dirty Pair stories serialized in science fiction magazines) is the inaugural work, is at once neither anime nor manga and both them and many other things all ...

Advent of the Angels: Japanese Professional Wrestling in the 1980s


Professional wrestling has existed in Japan at least since the late 1880s when sumo wrestler Sorakichi Matsuda travelled to the United States and competed alongside the Greco-Roman and catch wrestlers of the day. However, the sport didn't become firmly established in the country until 1951 when the great Rikidōzan became a breakout celebrity and national icon. Rikidōzan was an emigrant from Korea who came to Japan to train as a sumo wrestler, but eventually quit and picked up professional wrestling instead.

Rikidōzan quickly established himself as a hero to the Japanese when he consistently defeated a string of opponents from the United States (who helped hum out by always playing heel), giving Japan someone to root for and cheer on in the aftermath of World War II and the invasive Western sanctions and presence that came in its wake. In fact, it was Rikidōzan who gave us the ubiquitous “karate chop” which, despite its name, has nothing to do with actual karate and is in fact a wrestling move descended from the sumo practice of harite and is more properly called a knifehand strike. With Rikidōzan's rise to celebrity status ...

Advent of the Angels: The Golden Age of Professional Wrestling in the United States

I've never been a pro wrestling aficionado. There are certain things about my life and positionality that don't match up with accepted cultural narratives, and professional wrestling is one of them. Along with Star Wars, superhero comics, G.I. Joe and Transformers, pro wrestling's so-called Golden Age was one of the biggest shared cultural signifiers of the mid-period Long 1980s fondly remembered by anyone old enough to have lived through them, yet notably absent from my own lived experiences of the era.

I didn't choose those topics at pure random: Those subjects are things I've noticed over the past decade or so trotted out as some of the most beloved and iconic pop culture memories and reference points from this period. I do think there's a secondary story here though in that nostalgia for these particular things, above all others, is a recent innovation brought upon by the reification of a specific kind of retro discourse from a specific subset of a specific generation, namely Nerd Culture. But though its roots can arguably be traced back here, the rise and subsequent normalization of Nerd Culture and the Nerd Culture Agenda is not the real ...

Advent of the Angels: An Introduction to the History of Professional Wrestling


In order to properly talk about this show, we of course need some historical context.

The history of professional wrestling of the kind we most commonly recognise can be traced back to at least the 1830s in France. There is, of course, a difference between the competitive sport of wrestling and “pro wrestling”, and this is where the distinction really began to be made: Circus sideshows would feature strongmen acts who could also wrestle (acts with positively delightful names like Edward the Steel Eater and Gustave d'Avignon the Bone-Wrecker), and would challenge members of the audience to try and take them to the mat. After a decade or so, these acts became popular enough to headline circus troupes of their own, with the first such all-wrestling troupe appearing in 1848 presented by Jean Exbroyat. It was Exbroyat's troupe that first introduced the rule that holds were only valid if executed above the waist, eventually evolving into that most famous of combat sport phrases “no rough stuff; no striking below the belt”. In Europe, this style became known by the famous moniker “Greco-Roman Wrestling”.

But it was in the early 20th century where professional ...