It's important not to understate the importance of the launch of DC's first Star Trek comic line. For the entirety of its existence up to this point (and not counting the handful of US and UK newspaper comic strips that cropped up in the 1970s), Star Trek had been represented in sequential art form by Gold Key, a company basically run by about four people and with the somewhat dubious reputation of putting out all the licensed tie-in stuff simply to cash in on the brands of the day, regardless of quality (though they did have the rights to distribute Carl Bark's Duck stories in the US and gave Mark Evanier one of his first writing gigs on their Scooby-Doo, Where Are You! book, which has to count for something). And while there were some genuine gems in the Gold Key series, there is something of a sense that this was a book that existed pretty much because it had to and oftentimes felt like just another product in the Star Trek brand. 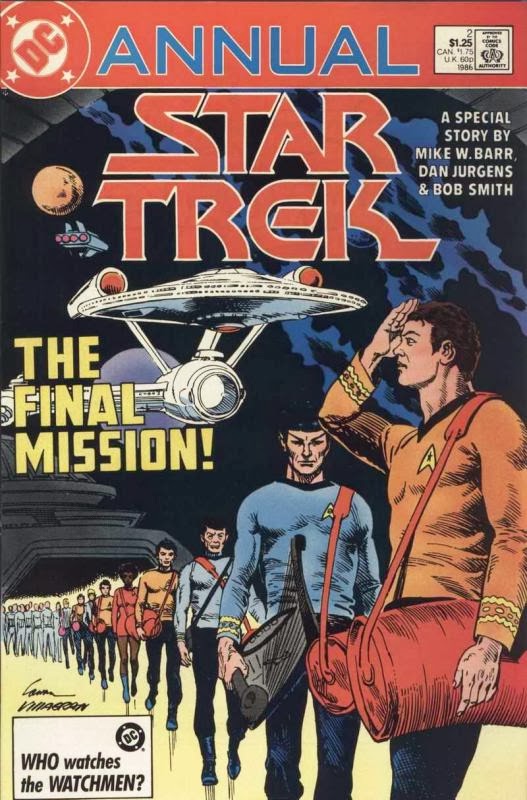 Star Trek fandom circa the mid 1980s was a curious thing. With four blockbuster movies to its name, the franchise was most certainly not the expressly marginal phenomenon it had at least the appearances of throughout the 1970s. However, given the necessarily sporadic nature of cinema, it's tough to see how Star Trek would have been seen as a truly ever-present thing (that is, a work that is unarguably current, which is somewhat different then the general ubiquity Star Trek has always had). That kind of presence requires, especially in the days before the never-ending sensory overload of publicity that today's media artefacts enjoy, something akin to a regular television show, which Star Trek still didn't have, though this would change now, in 1986, with the announcement of a new syndicated Star Trek series to premier next year.

This makes the appearance of “The Final Voyage” particularly well-timed, for, in addition to giving the Original Series a proper finale of sorts (it was a constant bugbear amongst a certain sort of fan that Captain Kirk talks about a Five Year Mission while Star Trek only lasted three seasons) that segues neatly into the film series, it also ...