Pop Between Realities, Home in Time for Tea 13 (The Rise and Fall of Ziggy Stardust and the Spiders From Mars) 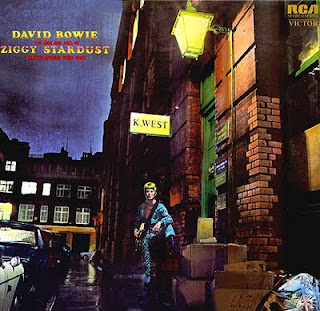 With thankful apologies to Chris O'Leary of Pushing Ahead of the Dame.


Some say the end is near
Some say we'll see armageddon soon
I certainly hope we will. - Tool, "Aenema"


The smart money, you have to realize, was not on reaching 1978. The question was just which of the myriad of ways we might kill ourselves would pull it off. Nuclear war? Ecological disaster? Social collapse into anarchy? Doomwatch, after all, made three seasons off of cataloging the myriad of ways humanist might slaughter itself.

So it's no particular surprise that Bowie starts the album with a song of apocalypse. And a remarkably concrete song of apocalypse at that - wandering through the streets and observing the people responding to the news that the Earth has five years to live. But notably absent is any explanation of how this happened - of which disaster will befall us. All of them. None of them. In a world in which the end is an absolute certainty, the means are beside the point.

The result, as Bowie exposes, is the fetishization of disaster. The Atrocity Exhibition writ large. The news isn't that we have five years ...

Prove To Me That I am Not Mistaken (The Time Monster)

It's May 20, 1972. T. Rex is back on top with "Metal Guru," which, continuing our rule that glam songs should be seen as well as heard, is linked. It holds number one for four weeks before finally yielding to Don McLean's "Vincent," Elton John, Johnny Cash, David Cassidy, The Rolling Stones, and Wings also chart. But perhaps the most remarkable moment, chart-wise, is the final week of this story, where T. Rex, Slade, The Move, Sweet, and Gary Glitter are all in the top ten. This period, with David Bowie's The Rise and Fall of Ziggy Stardust and the Spiders from Mars entering the charts (with its lead single, "Starman," entering the singles chart at 49 the same week that five glam acts are in the top ten). In fact, if you want an experience that is aesthetically indistinguishable from The Time Monster, has far better acting, and is completable in less than 1/6 the time, I recommend just marathoning all five ...

Change, My Dear (The Mutants)

It's April 8, 1972. Nilsson is still at number one. After one week, however, they are stunningly unseated by, and this is one of those moments where I love following the British charts, Pipes and Drums and the Military Band of the Royal Scots Dragoon Guard, with "Amazing Grace," which further impresses by staying there for five weeks. Also in the charts are Lindisfarne, Ringo Starr, Tom Jones, Neil Young, and T. Rex.

The IRA sets off a wave of fourteen bombs in Belfast in response to the Bloody Sunday Massacre. In a show of all being friends now, China gifts two giant pandas to the National Zoo. (Some time later, in my sister's favorite story about her traumatic childhood, my mother has her walk across a frozen expanse of Washington DC in February, promising her pandas as the incentive for her not to have a nervous breakdown, only for everyone to discover, upon reaching the zoo, that the pandas have been dead for some time and instead there's a memorial full of children's drawings and poems about how much they miss the pandas. This ...

It's February 26, 1972. Chicory Tip are still at number one. Two weeks later, it's Nilsson with "Without You," which holds the title for the remainder of the story. Michael Jackson, T. Rex, Paul Simon, Slade, and, I am sorry to say given that I loathe and despise them with every fiber of my being, Chelsea FC also chart.

In other news, Nixon concludes his visit to China. He follows this by attempting to get John Lennon to conclude his visit to the United States, using the somewhat novel method of deporting him as a "strategic counter-measure" to his anti-war beliefs. (The phrase is not Nixon's but Strom Thurmond's. Not that that's an improvement.) Two days thereafter, he passes an executive order setting standards for classified information, allowing the US to engage in a thirty-year campaign to cover up the FBI surveillance of John Lennon. Also in the US, demolition begins on the infamous Pruitt-Igoe housing complex, a disastrous public housing project that was a marvel ...

Time Can Be Rewritten 10: The Face of the Enemy (David McIntee, BBC Books, 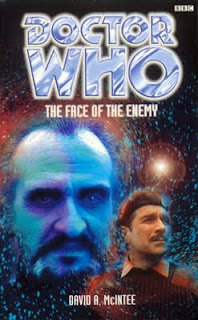 It's January of 1998 - the month after The Roundheads came out, for helpful reference. But in this case, the slow undulations of the wilderness years aren't really what I want to talk about, because the book we have on offer today is really quite interesting on its own merits. The Face of the Enemy is an oddity in the Doctor Who novels range. It's one of two books from the Missing/Past Doctor adventures lines to focus entirely on characters other than the Doctor. The first of these - Virgin's Downtime - is just the novelization of a Marc Platt-penned direct to video story with the Yeti in it. But this one is a different beast - a story of what UNIT gets up to while the Doctor is on one of his periodic jaunts off-world - to Peladon, in this case.

The result is a story that goes a long way towards disentangling some of the issues and juxtapositions of the Pertwee era. Because we've only really seen, at this point, two Pertwee stories that work much like traditional Doctor Who. Other than that, Pertwee has been paired up with the Brigadier and, in most of the ...

A Life of Ordered Calm (The Curse of Peladon)

It's January 29th, 1972. The New Seekers, with no trace of irony whatsoever, would like to teach the world to sing, and are going to have to insist that the harmonies be perfect. T. Rex mercifully puts this out of its misery quickly with "Telegram Sam," which, as with most glam acts, really needs to be seen as well as heard. This spares us for two weeks before Chicory Tip have their one hit with "Son of My Father," a song that comes far closer to capturing some of the basic themes of this entry than it has any right to. America (with "Horse with No Name," of course), Cat Stevens, Melanie (with "Brand New Key"), Sonny and Cher, and Don McLean (with "American Pie") all also exist in the top ten.

While in news without power chords, the famed Bloody Sunday massacre of U2 (and absolutely brilliant Saul Williams cover) fame takes place as the British army opens fire on unarmed civil rights protesters in Northern Ireland. So OK, still power chords, but given that since I wrote the Day of the Daleks ...

You're Just a Soldier (Day of the Daleks)

It's January 1st, 1972. Little Jimmy Osmond is at number one with "Long Haired Lover From Liverpool," for which the UK continues to seek a formal apology. Alarmingly The Osmonds at large and Donny Osmond are also in the top ten. We regret to inform you that the number one does not change over the time this story is running. Also in the charts, however, are David Bowie, Slade, Elton John, The Sweet and T. Rex, along with Carly Simon's "You're So Vain."

Since The Daemons, the UK has begun negotiations to join the EEC now that Charles de Gaulle isn't there to block them, continuing a process you may remember from way back here. Jim Morrison has died. The UK abandons its Black Arrow space program, formally consigning The Ambassadors of Death to a future that never happened. Tensions in Northern Ireland ratchet up, with the UK sending more troops and with UK security forces beginning Operation Demetrius, i.e. the long-term internment without trial of suspected paramilitary rebels. To say that this went over poorly with large numbers of people would be an understatement. Richard Nixon formally ...

Pop Between Realities, Home in Time for Tea 12 (Chariots of the Gods?, Ace of Wands, The New Age) 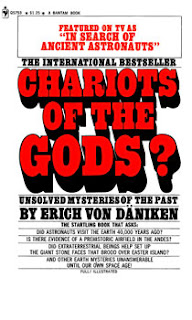 And now, then, for the other part of the argument. The Daemons was revolutionary in terms of how it expands the domain of what Doctor Who can do. But wait a moment. This is a show that only two and a half years ago was exploring the land of fiction. This is a show where one of its dominant creative forces over the first five years was obsessed with alchemy. And yet on the other hand the show has always praised science over superstition, promoted the idea that there is a rational explanation behind everything, and treated scientists as enlightened men of peace who can bring about positive social change. So to some extent, what's happening in The Daemons is the resolution of a fundamental tension that has been in place in Doctor Who ever since the Doctor equated the TARDIS with television in the first episode, making it simultaneously a scientific marvel and something that is primarily understood in terms of more wooly notions like "the power of stories." It's not accidental that this resolution happens in 1971. But understanding why is a big project. And that's what this entry is.
Let's start with Jo ...