The Evil Has No Name (The Daemons)

It's May 22, 1971. Dawn are at number one with "Knock Three Times," and hold it for four more weeks before giving way to Middle of the Road's "Chirpy Chirpy Cheep Cheep," which is just one of those things that happens on the British charts. See also Israeli novelty blues. What's more interesting is the lower reaches of the chart, where we see... OK, well, here's the thing. I have next to no idea who any of these bands are. Admittedly, I am not the world's biggest 70s Music Buff, but I like to think that I'm not completely hopeless and that many of you will also be more or less mystified by the information that John Kongos, Tami Lynn, Blue Mink, East of Eden, R Dean Taylor, and the Elgins were also in the top ten.

In other news, a massive earthquake levels Bingol, Turkey. Neville Bonner becomes the first indigenous Australian to sit on the Australian parliament. But the big stories are the US dropping its trade embargo with China, which we'll talk more about ...

People In Charge of Those Laws (Colony in Space)

It's April 10, 1971. T. Rex is still at number one, and remains so for three more weeks for a total of a six week run at the top. He's finally unseated by Dave and Ansel Collins's "Double Barrel," a reggae track that survives for two weeks. The charts also see Ringo Starr follow his three former bandmates into the top ten, and The Rolling Stones hit number two with "Brown Sugar/Bitch/Let it Rock." Andy Williams, Olivia Newton-John, and Waldo de los Rios also make the top ten, the latter with a recording of Mozart's Symphony No. 40. And lower down, The Sweet are at number thirteen with "Funny Funny," another visible sign of glam's reign.

The news is mostly incremental progress on various fronts. Charles Manson and his followers are sentenced to death, Bangladesh formally comes into being, and, perhaps most significantly, several of the events that will eventually bring down the Bretton Woods system kick up as central banks in several European countries halt currency trading due to an excess of US dollars flooding their markets.

This Pretty Little Thing Here (The Claws of Axos)

It's March 13, 1971. Mungo Jerry is at number one still, followed by dueling ex-Beatles with McCartney and Harrison. But it's week two of the story where it finally happens. T. Rex hits number one with Hot Love, establishing glam rock as no longer the next big thing but simply as the big thing. It's worth pausing here and looking at T. Rex's Top of the Pops appearance for this song just to see the way in which the visual styles of pop music and Doctor Who had merged into a single aesthetic. Elsewhere in the charts are Deep Purple and John Lennon and the Plastic Ono Band.
In real news, Bangladesh splits off from Pakistan, William Calley is found guilty of the Mai Lai massacre, the Ed Sullivan Show airs its final episode in the US, and the 47 day British postal workers strike ends. There's going to be a lot of strikes over the next few years, so ...

Your last memory is of receiving a contact from an unknown agency: me. Everything since has been erased from your minds. (The Mind of Evil)

It's January 30, 1971. George Harrison is at number one with "My Sweet Lord," having unseated Mr. Dunn. He enjoys a five week run before Mungo Jerry's "Baby Jump" unseats him. Lower on the charts, T. Rex still stalks about upon a White Swan. The Supremes are on the charts with "Stoned Love," a song that is actually probably not about sex while smoking cannabis, not that that has any real relevance to its interpretation. Judy Collins, Paul McCartney, Neil Diamond, and Elton John also chart.

In other news, Idi Amin, or as he'll eventually become known, His Excellency, President for Life, Field Marshal Al Hadji Doctor Idi Amin Dada, VC, DSO, MC, Lord of All the Beasts of the Earth and Fishes of the Seas and Conqueror of the British Empire in Africa in General and Uganda in Particular, deposes ...

He Was a Friend at First (Terror of the Autons)

It's January 2nd, 1971. Dave Edmunds is at #1 with "I Hear You Knocking." It's unseated the next week by Clive Dunn's "Granddad," a piece of Victorian nostalgia by one of the stars of the sitcom Dad's Army, which holds #1 for the next three weeks. Lower in the charts are the Jackson 5, Neil Diamond, Glen Campbell, and Andy Williams. But the real action starts at number ten in the first week, rising up to a peak position of #2 the final week "Granddad" is on top, namely T. Rex's chart debut with "Ride a White Swan," recognized as the real start of glam rock. Tat Wood argues that Terror of the Autons is an equal partner in the start of glam rock, which is an interesting argument, if not one I'm completely sold on. But in any case, glam will serve as the primary musical accompaniment to the Pertwee era from here on out.
In other news, we've done a season transition, which means six months ...

Time Can Be Rewritten 9: The Scales of Injustice (Gary Russell, Virgin Books, 1996) 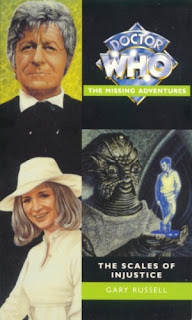 It's July 1996, right in the middle of that awkward period where everyone is shifting uncomfortably following the TV movie, by this point not yet sure what it means for the future of Doctor Who, but quite sure that the answer is not, at least in the short to medium term, going to be anything good. The now moribund Virgin Books line releases Gary Russell's Third Doctor novel The Scales of Injustice.

Gary Russell has something of a reputation for what is generally referred to as "fanwank." That is to say, he's known for writing books that are packed to the gills with continuity references for the sake of continuity references. Now, a sane person could and perhaps even should ask what the difference is between fanwank and, for instance, having the Macra pop up forty years after their last appearance for a cameo. And plenty of people have asked that. If nothing else, then, The Scales of Injustice serves to explore that line.

Because this book is not so much continuity heavy as it is capable of producing continuity gravity. Direct references exist not only to the four Pertwee stories preceding it but also to Time ...

Pop Between Realities, Home in Time for Tea 11 (Doomwatch, The Atrocity Exhibition) 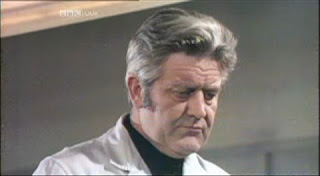 As we watch the at times compelling, at times just kind of sad spectacle of Doctor Who frantically trying to reinvent itself on a brand new formula and premise, it may be worth looking at other contemporaneous British attempts at Earth-based science fiction to get some idea of what genre Doctor Who is trying to impose itself on. It's not, of course, as if Doctor Who has never imposed itself on other genres before. The historicals, in their latter days, were all about genre crossing. But note the specific wording - a story like The Gunfighters was about taking Doctor Who and crashing it into the western then filming the explosion. With the UNIT stories we are by and large seeing something different: a fair swath of the production team does not seem to be trying to cross Doctor Who into another genre. They're trying to make Doctor Who as an example of another genre. Until we understand what that genre is, it's going to be difficult to say what can be accomplished by turning Doctor Who into that genre.

To some extent we've already seen what that genre is via Monty Python. Or, more to the ...

It's May 9, 1970. Norman Greenbaum continues to be at number one. More alarmingly, at number two is the England World Cup Squad with "Back Home," the first of many post-1966 humiliations England's national football team would suffer. Worse, a week later the England World Cup Squad takes number one, holding it for three weeks. It's unseated by "Yellow River" by Christie, a song in the classic "soldier returning home" subgenre. This lasts a week before Mungo Jerry's "In the Summertime" plays us out of season seven. The Hollies, Creedence Clearwater Revival, Tom Jones, The Moody Blues, Fleetwood Mac, and The Supremes also chart.

Since The Ambassadors of Death wrapped, the most obvious news story is the Kent State Massacre. This is because 2/3 of my readers are Americans, and mistake inspiring a really good Neil Young song with mattering. All Kent State amounts to is a confirmation that the hippie/anti-war movement was successfully so marginalized that affixing bayonets, advancing towards them, and shooting them dead is not entirely outside of the mainstream. More interesting for us is actually something like Thor Heyerdahl setting sail ...