Hey, Turn That Down: The Doctors Revisited (David Tennant) 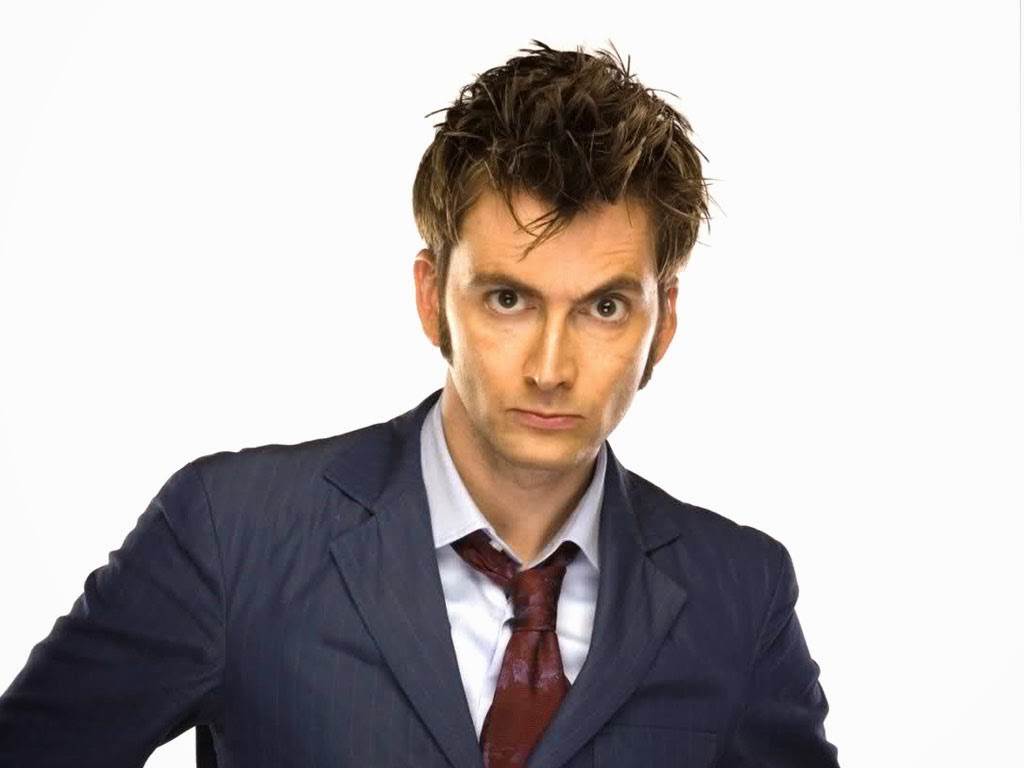 At last, we reach the end of history, with an episode that is set up to, basically, repeat the same talking points about the Tenth Doctor that were being used when he was still on screen. This is as straightforward as it is possible to be - an unabashed display case for an era of Doctor Who that everybody knows is a classic.

Which, fair enough. There's really no getting around the fact that the Tennant era was wildly popular, and that Tennant is always going to be one of the iconic portrayals of the Doctor. There are no apologias to make, and as of 2013, at least, the Tennant era hadn't slipped into history, not least because Tennant was going to be making a return in less than a month anyway, with no explanation of why he looked older or anything like that necessary. There was, really, no other way to do this.

That said, the selection of what to focus on is interesting. Noticeably absent is any standing in the rain. There's a little bit of the Bad Wolf Bay scene from Doomsday, but for the most part the two iconic emotional scenes from Tennant's ...

A Split in the Skin of the World (The End of Time, Part Two)

A bombed out husk of imagined Londons, all the dead and abandoned futures piled up alongside each other. All the things that could have been, united by their shared experience of a moment where it became obvious that they actually never could be. Futures that have run out, been spent, boiled away to ruins, our cultural memento moris, reminding us all of the looming and inevitable death that is nostalgia. “My name is Ozymandias, king of kings. I don’t want to go.”
It is tempting to end on a more positive note. It is not as though I don’t enjoy The End of Time, or the Davies era. I quite love both. Really, I do.
But the Davies era has long since ended. We have parted the ways, and faced doomsday. We have seen the journey end and long since seen the next Doctor. We’ve praised it, buried it, critiqued it, and disinterred it several times to do it all again. And now we have The End of Time, an ending so absolute that it does not so much cut ...

A Woman (The End of Time, Part One)

It’s December 25th, 2009. Rage Against the Machine are at number one with “Killing in the Name,” a feat of countercultural rebellion cooked up by people who got tired of the crown of the Christmas #1 being dominated year after year by The X Factor and who thus decided to try to send a different single to number one. Also in the charts are Lady Gaga, Robbie Williams, Rihanna, Journey, Cheryl Cole, the Black Eyed Peas, and X Factor winner Joe McElderry.
In news, since The Gift made its bow, the Treaty of Lisbon has come into force, Terry Wogan has presented his final breakfast show, and polling in advance of the 2010 general election has shown the Conservatives with various degrees of leads. Also, David Tennant has been all over every talk show imaginable doing a farewell tour as the Doctor, as Christmas marks the first episode of his two-part departure, The End of Time. After all the festivities have died down, long after the episode has aired, it is possible to go and download the podcast commentary from the BBC and to watch the ... 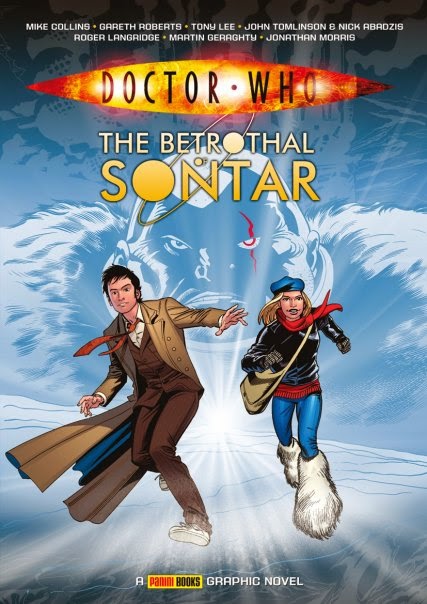 It’s strange, I’ve been writing about the Tennant era for nine months now, and yet reading the compiled Tenth Doctor comics from Doctor Who Magazine the thing that jumps out most immediately is the amount of time enveloped in them. It helps that there’s a change in editors and a late change of direction as a result, but even without that there’s a sense of size and history here that is perhaps lost when looking at the story-to-story changes of the Tennant years.
Actually, let’s start with that change in editors. The majority of the Tenth Doctor’s comics are edited by Clayton Hickman. No account of of Doctor Who is ever going to allege that Hickman is one of the great and most important figures in the history of the series, which is true in a sort of blandly factual sense, but obscures the fact that on the occasions where Clayton Hickman does enter the margins of the story he inevitably acquits himself marvelously. Whether as the talking head who obligingly filled in context so that some washed up 70s actress or another appears to actually make sense in Doctor Who Confidential, as Gareth ...

You Were Expecting Someone Else 28: The Forgotten

A commissioned essay for ?ukasz Bury. 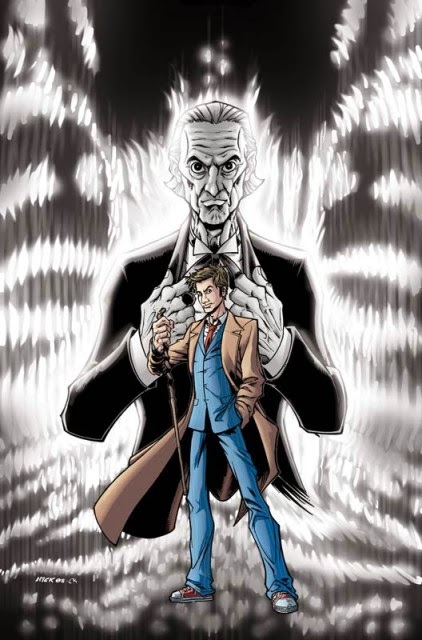 The Forgotten is a different sort of Doctor Who comic to any we’ve discussed before. For one thing, it’s American - so American, in fact, that it didn’t even get a UK release. This was a peculiarity of IDW’s deal to acquire the license: because Panini has the UK license already, none of IDW’s Doctor Who comics could be distributed in the UK (which is why their Star Trek/Doctor Who crossover led with Star Trek - because that made it technically a Star Trek comic that could thus get UK distribution. No, really, the licensing rules are that dumb).
IDW, upon acquiring the license, commenced with a two-pronged approach. First was a six issue run of Tenth Doctor/Martha Jones comics by Gary Russell, with art by Nick Roche, which was published alongside reprints of 70s/80s Doctor Who Magazine material starting with Doctor Who and the Iron Legion, all with quite slick colouring. (These books are presumably out of print or on their way out of print now that IDW has lost the license, and I actually highly recommend them if you can track them down. Voyager has ...

Outside the Government 16: Dreamland 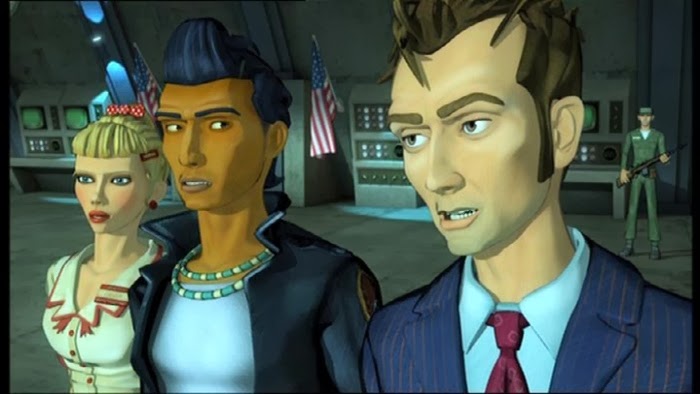 The first question with one of these, and by “one of these” I mean bits of Doctor Who made post-2005 that are not television episodes, is why it exists. This is not pejorative in the least - it’s just that with all the brand management that goes into Doctor Who post-2005, causing an officially licensed story featuring David Tennant’s Doctor as the lead character to exist is non-trivial. There are meetings, and budgets, and all sorts of non-trivial processes and hoops to jump through. Which means that a project like Dreamland only exists because of a complex network of politicized corporate decisions.
In the context of 2009, at least, it’s easy to understand. Doctor Who was being very naughty, after all. Coming off of its hottest year ever, a program that was pulling in a fantastic amount of money for the BBC decided to kick up its feet and take a year off prior to returning in a new and altogether more uncertain form. It was a massively high risk strategy, and the fact that Davies (and Moffat) could get away with it speaks volumes about how successful Doctor Who was and how unassailable Davies’s position was ...

Outside The Government: The Gift

Last War in Albion will be up tomorrow. 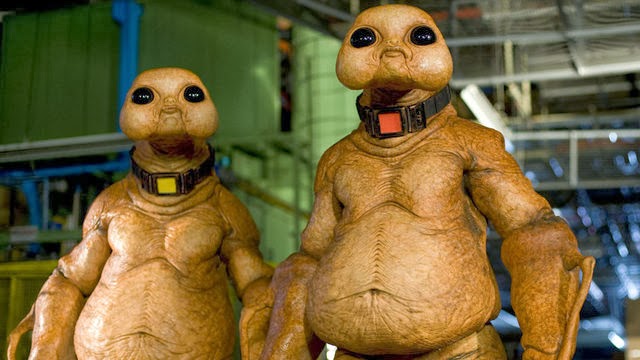 It’s November 19th, 2009. The charts haven’t changed. STS-129, the third-from-last flight of the Space Shuttle Atlantis, launches. Barack Obama makes an international trip to China. The Original of Laura, an unfinished novel by Nabokov, is published over his wish that it be burnt upon his death. France qualifies for the 2010 World Cup due to Thierry Henry committing a deliberate handball to score. Oprah Winfrey announces the impending end of her television show. The Large Hadron Collider is turned back on.
While on television… oh dear. The third season of The Sarah Jane Adventures has been in many ways uneven, but The Gift is frankly an unmitigated disaster. Attentive readers may recall a kerfuffle back in the first season of Davies-era Doctor Who when Lawrence Miles, enfant terrible of the late Wilderness Years, famously and controversially lambasted The Unquiet Dead for its alleged xenophobia. The argument went that the episode went to great lengths to have the Doctor refute Rose’s objections to the aliens being allowed to use human cadavers as bodies only to prove Rose right when the aliens really do turn out to be evil ...

Time Can Be Rewritten Final: The Day of the Doctor 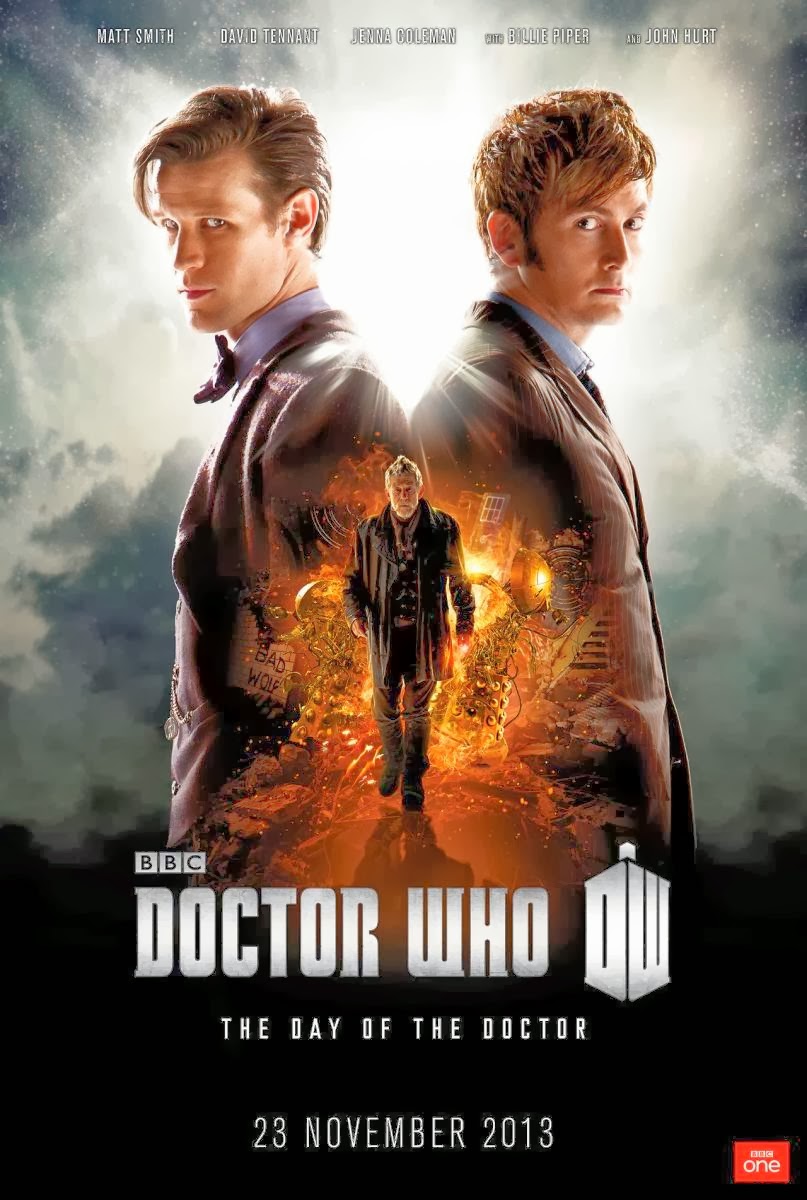 Which makes it all the stranger that he doesn’t.
Even before time was rewritten, of course, this was true. Davies deliberately inserts a gap between The Waters of Mars and The End of Time, even opting to develop the running Queen Elizabeth I joke within it. In this regard, The Day of the Doctor slots in with precision, just as it does with The End of Time, which it goes out of its way to make sure it still fits in with. So much so that Tumblr became an entertaining place in the immediate wake of The Day of the Doctor, as scads of people cried foul about how it contradicted the Davies era only to have scads of people point out all of the tiny little things that Moffat did to actively and meticulously match the Davies era.
As with many fan debates on Tumblr, the immediate fallout of The Day of the Doctor had no shortage of straw men, with people angrily reacting against points that never actually got made. (See also the “legions” of fans who aren’t going to watch Peter Capaldi because he’s old and unattractive.) Still, there’s an interesting fault ...