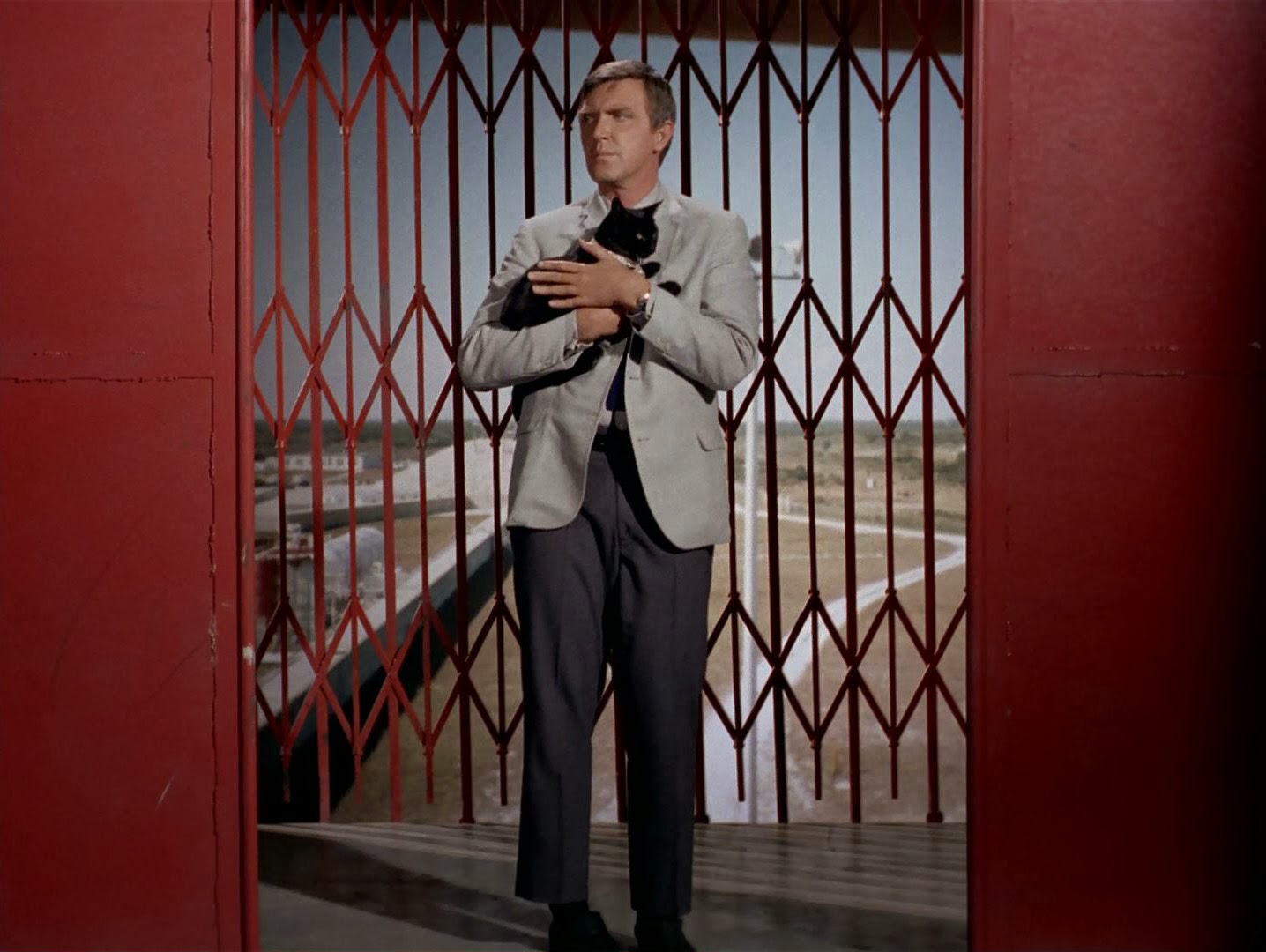 “Assignment: Earth” aired on March 29, 1968. Martin Luther King, Jr. was assassinated on April 4. Synchromysticism is the study of “happenings” and reoccurring patterns and synchronicity in human behaviour and world events, and the end of April is regarded in synchromystic circles as a “red zone” with a high concentration of violent activity. Sixty-nine days after King's death, Robert F. Kennedy was also assassinated. June 5, the date of Kennedy's death, also has synchromystic connections, being the date of the Six-Day War between Israel and its neighbouring countries. June is a major month on the whole with Midsummer (around the 24th) being a particularly important date. The flying saucer era began on June 24, 1947 when pilot Kenneth Arnold reported seeing unidentified flying objects flying in formation at supersonic speed over Mount Rainier in Washington. The date has also marked several occasions when mysterious objects fell from the sky.

Looking back on the pilot of any long-running television series can be a strange experience. The reoccurring motifs we're accustomed to aren't there, or are at least present in forms different to the ones we're accustomed to. A pilot is by definition a first draft ...

“When the wayfarer whistles in the dark...”: The Omega Glory

What more do you want me to say? It's terrible. Everyone knows it's terrible. You don't need me to tell you that. The plot is literally nothing more then capture and escape sequence after capture and escape sequence liberally peppered with intolerably drawn out and boring fight scenes in between. It is so chest-thumpingly, simperingly jingoistic it practically loops back around to parody (at least William Shatner is playing it that way). It is racist on some kind of transcendental level, depicting the Yangs as noble savages while portraying the supposedly technologically-advanced Cohms as identical, mute, smiling Chinese stereotypes and it even has Kirk literally call them yellow. It is the picture-perfect case study of the ugly racism, sexism and unreconstructed United States neo-imperialism that always lurks just below the surface of Star Trek, threatening to eclipse everything that makes the franchise actually worthwhile. It was also one of the leading contenders, along with “Mudd's Women”, to be the second pilot. Bob Justman was so appalled by the script Gene Roddenberry turned in, he drafted a multi-page memo savaging it; railing into it from every ...


“The Ultimate Computer” is another somewhat deceiving story. It has a great deal of things all going on all at once and is indeed good in many of the ways people often say it's good. But there's a secondary tier of ideas this episode is also working with for which it doesn't tend to get the credit I think it probably should, and it's very indicative of the way Star Trek is always in some sense pushing against itself. On the other hand, “The Ultimate Computer” doesn't quite work either: Not all of the concepts it's trying to convey come across as well as they perhaps could have, and the script has an unfortunate tendency to contradict itself. I'd definitely say it's a good baseline target for the show to have been shooting for this season though. However, the one problem with that is that we're a month away from the end of the filming block for this year: It has the bad luck to end up being compared to “A Piece of the Action” and “Patterns of Force” (a comparison in which ...


If there's a surer, more immediate sign of the quality of something other than being banned by national governments, I can't think of it.

“Patterns of Force” was one of the handful of Star Trek episodes initially blocked from airing in certain markets outside the United States for a time. In this case, the country was Germany, which refused to show it for, well, rather obvious reasons as far as banning television shows go. And this is a shame, because Germans would probably have really enjoyed “Patterns of Force”: It's the most flagrantly anti-authoritarian the show's been since “Mirror, Mirror”, and in fact this one's even more blatant and upfront about its message (which is actually a good thing in this case) and a more than capable bit of television to boot. It's yet another cracking mini-classic of an episode, and I'm genuinely surprised at how many of them there are at this point in the season. In fact the last few weeks may have turned my opinion on the second season around a little bit, as I know two out of the next ...

“Let's try it once more, with feeling”: Return to Tomorrow


This is an episode I really, really wanted to like but the whole thing sort of left me feeling unsatisfied at the end. Mind, this is after I had to remind myself what it actually was: “Return to Tomorrow” is unfortunately one of the episodes that I've always tended to get mixed up with a bunch of other episodes, namely “The Return of the Archons”, “This Side of Paradise”, “The Way to Eden” and “The Paradise Syndrome”. Basically, Star Trek has far too many episodes with the words “Return”, “Eden”, “Paradise” and “Tomorrow” in the title, and this isn't even getting at my old bugbear the show keeps loving to fall back on: Bland, lazy Garden of Eden and Book of Genesis pastiches. By The Prophets even “The Cage” had an “Adam and Eve” plot, and this one has the nerve to not only drag that up again, but throw Erich von Däniken into the mix and imply Sargon's people were the inspiration for those myths. Almost five years into Star Trek I can flatly and confidently claim I am beyond sick and tired of Adam and Eve by now.

“On your television screen”: By Any Other Name


This was most likely one of the first episodes of the Original Series I ever saw-One of the VHS tapes I rented from the local video store when I was first getting really into Star Trek: The Next Generation to see what all the fuss over this older show from the 1960s was. Although I certainly knew the Original Series existed, my practical experience with it came mostly from pop culture references and the numerous books and video games I had about or set during the show's time period. I never saw this show in syndication (in fact the first time I got to see it in order was when the Sci-Fi Channel picked it up sometime in the mid-to-late 1990s, perhaps a consequence of possessing about four TV stations during my more formative years), so these scattered and assorted VHS tapes were my first real window into Star Trek's past. It may well have been among the first two tapes I got, along with “The Trouble with Tribbles”, although I may be blurring memories of multiple rental events into one ...

“This is MY town!”: A Piece of the Action

Actually, it's better than it lets on, and to find a reason why look no further than that second writing credit. Gene Coon had decided that, given the success of “The Trouble with Tribbles”, Star Trek could use more episodes with a larger and more overt focus on comedy (and it's worth noting it was Coon who saw the potential in young Dave Gerrold's script, encouraged him to keep submitting to Star Trek and who helped him shape “Tribbles” into the masterpiece it became). George Clayton-Johnson, the author of “The Man Trap”, had written an early version of this story as a treatment early in the first season called “Chicago II”. The actual idea for the episode is frequently attributed to Gene Roddenberry due to a two-word pitch (among many others like it) in his original 1964 proposal for Star Trek, Star Trek Is..., entitled “President Capone”, but as it's a rather strangled path from that to what we can watch on screen, it's tough for me to give him full credit for it. Coon discovered Clayton-Johnson's script, liked the idea and decided to retool it ...

“A world sinks thus; and yon majestic Heaven/Shines not the less for that one vanish'd star!”: The Immunity Syndrome


Well, here's something I wasn't at all expecting. Given how Star Trek has been seriously underperforming the last few weeks as well as the fact the series has been steadily but noticeably running out of steam since midway through the season I fully anticipated that the episode about the Giant Space Amoeba would be another silly runaround, especially as my memory of it consisted mostly of some agonizing debate over Spock taking on a suicide mission from which it was eminently clear he was going to come back, as well as of the aforementioned Giant Space Amoeba. I was totally prepared to glibly take the piss out of this one as another example of Star Trek's inevitable march towards cancellation.

It turns out the memory does in fact cheat, and I'm thankful it does in this case because “The Immunity Syndrome” is actually properly excellent.

In some ways the episode “The Immunity Syndrome” is most immediately comparable with is “The Doomsday Machine”, from which it inherits its thriller structure. Once again, we have a tense countdown to destruction that is narrowly averted at the last ...