There is, in some quarters, an assumption about alternatives.  There is fannish continuity obsession on the one hand and, on the other hand, there is 'the real story' which tends to be to do with families and relationships.  To an extent, this is a straw man... but it sometimes exists, implicitly, even where it is abjured.  And it's a false dichotomy.

There is a Third Way: the investigation of the relationship between the political implications of monster wars and the lives of ordinary people.

Whereas the classic series concentrated on the monstrous, and then later upon the fan view of the monstrous, the new series tends to concentrate upon interpersonal relationships with monstrosity as a pretty backdrop.

The difference is that the classic series' logic was pragmatic (i.e. we are making a show about monsters) whereas the new series' logic is openly ideological (i.e. human family and romantic relationships are THE REAL STORY).  If you doubt that this is ideological, look at how it has been iterated again and again.  Look at 'The Empty Child', at 'Father's Day', at 'School Reunion', at 'Army of Ghosts / Doomsday', at 'Closing Time', at 'Night Terrors'.

Neither view is supportable but the former has at least the virtue of non-didacticism.  It's a contrast to the aggressive apoliticism of so much of the new series, even when the new series dresses itself in the clothes of political engagement. 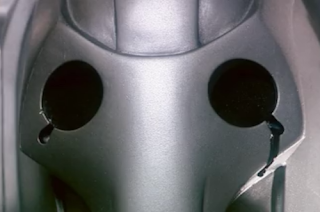 There is, fascinatingly, a similarity to the simplistic view of Blair as a villain.  It is the difference between a wishy-washy reformist liberal/leftyishism ("Blair has betrayed Labour") and a faux-pragmatic panglossian acceptance ("he's achieved modest things that were, realistically, all he could do").

There is a Third Way that is invisible to those leftists who complain either that he did what he could or that he didn't do enough, precisely because it is based on the political relationship between personality and wider monstrosity.

That, weirdly, is why the more RTD moved into an engagement with the problems of New Labour, the more he moved into an acceptance of its premises.  By the time of the uber-cynicism of 'The Sound of Drums' etc, he'd accepted that people are, essentially, horrible and Blair/Saxon is probably about what they deserve. Share on Twitter Share on Facebook

How would you categorize Harriet Jones (MP, Flydale North) in this context?

It is curious that the Christmas Invasion contains two elements that would come into play later - the Doctor's severed hand (which factors into two season climaxes), and the Six Little Words that led to Harriet's downfall and the political instability that would eventually put Saxon in power. Especially the latter; the Doctor essentially is responsible for the rise of Saxon. What was RTD's thesis statement here?

I think it's pretty simple, to be honest. Depressingly so. Harriet Jones is a comforting soft-left reformist daydream of a particularly revolting kind: the principled, compassionate, unambitious Labour backbencher who will run the country along lines of simple decency, topping up the wages and benefits of the respectable (working) poor, waving the flag in a modest and lovably eccentric way, reclaiming ostensibly British values like fair play and idealism, telling the yanks to piss off ('cos you do realise that everything wrong with British politics is all your fault, right?), etc, etc. Then she fails because such idealism always falters or betrays itself in the face of external threats. The comforting daydream breaks on the rocks of hard reality.

There is ambivalence at this central part of Harriet's trajectory. Her Belgrano-moment is also a War-on-Terror moment. This is RTD's redux on his initial barbed cynicism about the War-on-Terror in 'Aliens of London/WW3'. By 'Christmas Invasion', things have become (supposedly) more complex. There is a real threat of terrorism that demands hard and brutal measures. The Doctor disapproves of her action, yet his own action against her is hardly presented as untroubling. Indeed, it's part of his (eventually truncated) trajectory in Series 2: that of arrogance. In this case, the arrogance of political idealism in the face of external threat.

By the final part of the progression, 'Sound of Drums'/'Last of the Time Lords', we see full Blairite cynicism taking over. Notwithstanding RTD's own encoded lashing at Blair in the person of Saxon, the story of the Toclafane is based on just the kind of cynicism which sees Blair as the inevitable end result of the failure of Harriet Jones-esque idealism in the face of ugly reality. People (being fickle moral cowards, natch) vote for the Blairite warlord-in-waiting. And all because humanity tried to reach Utopia.

Even as it sneers at Blair, this story provides him with an alibi: the masses' Utopian daydream fails, they get scared, so give them mobile phones, a cheesy smile and easy promises and they'll elect you. Take over their brains, it's easy 'cos they're cowardly dummies. Martha's Dad even gets to voice this blame when he shouts to the watching crowd. The only way out, the only route to a happy ending, is yet another strong man. The utopian daydream wins, but the deus ex machina needed makes the victory unconvincing. You can tell the atheist writer doesn't really believe his own story of collective prayer.