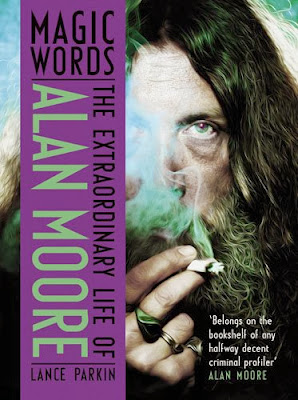 At least, that's what I was under the impression was the story. Could be that I've been taken in by an urban legend in the comics community.

That's the ostensible reason, but it's still strangely out of line with Moore's usual attitudes and approaches.

At this point the overlap between Lance Parkin's interests and mine is downright unsettling.

And to underline that point, here's Parkin's review of A Golden Thread.

Given that Moore famously wrote Neonomicon to pay a large tax bill it's not beyond the realms of possibility that he'd be in a situation where he had to get a large amount of money quickly.

What is strange is that one of his most personal statements of belief and formally complex works, Promethea is owned by his bette noir DC along with (at least part of) League Of Extraordinary Gentlemen the thing that he appears to enjoy making the most.

The money wouldn't have been quick for the ABC stuff, though - he was getting a higher page rate, not an advance or anything. (Neonomicon happened specifically because William Christensen was willing to give him an advance on the royalties. And I suspect the large tax bill Neonomicon was settling was due to the sales bump the Watchmen movie caused, and was not just a random thing.) But yes, I agree that it's odd that Promethea isn't creator owned. Though I suspect the reason for that is that what Promethea became is not entirely what Moore originally intended it to be.

This sounds like a book I'll have to check out. I haven't commented much on your Eruditorium entries, as I feel others have far more to say than I about Doctor Who, and I've mostly refrained from commenting on Last War in Albion because, as an American, I'm not too familiar with the material covered thus far. But once M&M hit the states you'll be getting stuff I know very well, that I bought with my own hard-earned dollars in comfortably dilapidated comics shops as they happened. Stuff I have long-considered opinions on dating back 30 years. I suspect I'll have more to say on Moore (and Morrison, and Miller, Gaiman, Delano, Wagner, Sienkiewicz, the Hernandez Bros., Spiegelman, Clowes, Bagge, etc.) in the months to come.

"That's the ostensible reason, but it's still strangely out of line with Moore's usual attitudes and approaches."

It has, in part, always been the reason Rick Veitch has given, since 1999, and he's a man not known for dissembling when it comes to discussing creative or financial decisions of his own or of publishers. And he was the closest to Moore as co-creator at the time, when the line was conceived in the wake of the collapse of Extreme/Awesome. (The other part of course being that Moore wasn't just trying to get himself the extra upfront money, but had created the entire line because artists he'd recruited for Awesome were now out of work, and he was trying to help them out as fast as possible.)

Remember, the titles were all meant to only run for a year under Moore before being handed off to other writers, too. He simply wasn't that attached to the creations at the time he made the decision over ownership.

(Obviously, I haven't read the Parkin book, so I don't know what other mysteries are stirred into the mix, per Phil's allusions. But I'll be arriving in London two days before the launch, and have my tickets already.)

I don't know much about comics.

It's interesting that five out of the first eight comments on this post relate partly or wholly to intellectual property rights.

Is the ownership of ideas a recurring theme in Moore's work or only in his career?

Ownership of the characters and work is a pretty big deal in comics, particularly the difference between creative work for hire, where the rights stay with the company, and other arrangements where the rights stay with the creators. During the period that Dr. Sandifer is covering, it was the source of a lot of conflict and change in the industry, and also showed up as a common theme in the comics themselves.

I've read this part of the book now, and several bits and pieces of the rest of it, and it seems that any apparent holes in the story may be attributable to holes in Parkin's knowledge or telling of the story; he makes various small errors of fact (here and in other sections), including repeating uncorrected a self-aggrandising falsehood from noted oaf Don Murphy.

(League was never intended to be an ABC book at all; it was part of the Homage line, which was Wildstorm's creator-owned imprint. Its rebadging on moving to DC was an unfortunate byproduct of Firewall, but the different approach to design, different letterer, different copyright notice, and the fact it was set in a completely different universe all remained plain.)

Do you know of any sources that cover it more thoroughly? It's a moment I'm going to be terribly interested in when the time comes.

Argh, spent ten minutes typing a reply, then hostel wifi cut out and ate it. Drop me an email.