According to Miles and Wood, Barry Letts' eco views were very much influnced (as were many people's) by a text called Blueprint for Survival, co-written by Edward Goldsmith (now deceased) and published in the magazine he founded, The Ecologist, in 1972.  It was supported by many scientists and was subsequently released in book form to became a best-seller.  Miles and Wood identify it as the real-world model for Sir Charles Grover's Last Chance for Man in 'Invasion of the Dinosaurs'.  There is indeed something of Goldsmith's politics (small-c conservative; anti-industrial society) in the fictional Grover, who is simultaneously an eco-radical and an establishment elitist who wishes to turn the clock back (literally) to a kind of enlightened feudalism.  George Monbiot has described Goldsmith's politics as "a curious mixture of radical and reactionary", saying that he "has advocated the enforced separation of Tutsis and Hutus in Rwanda and Protestants and Catholics in Ulster, on the grounds that they constitute 'distinct ethnic groups' and are thus culturally incapable of co-habitation".  According to Monbiot, Goldsmith

assumes that culture is a rigid, immutable thing: that different communities can live only within the boxes nature has assigned to them. Confusing, for example, Protestantism and unionism, he fails to understand the political forces which cause splits within communities and associations between them. He fails too to see the external manipulation which first defines ethnicity inflexibly, then drives the newly separated peoples to fight.

Now, I'm not attributing similar views to Barry Letts or Robert Sloman.  However, there is something of Goldsmith's hankerings for the regional and the anti-industrial in 'The Green Death'.  The very separateness of Wales and the Welsh tells us something.  The resolutely English characters - even the Doctor is English really, and this has never been plainer than in 'Green Death' - become strangers in a strange land.

Making the workers Welsh seems like a way of quaintifying them, since quaintness was the deadly stigma that mainstream British (i.e. metropolitan English) media culture foisted upon Wales... at least before substituting constant nasty jokes about shagging sheep and Splott (i.e. standard jokes based on stereotypes about rural people and working class communities).  Welshness is a way of 'othering' them, of segregating them, of making them a separate community.  The Welsh working class is depicted as a subculture within British society, rather than, say, one of the most significant layers of the majority class in the country... which Welsh mineworkers certainly were at the time.

There's no reason for 'The Green Death' to take place in Wales but that Letts and Sloman want the story to centre on a mine (and going to Wales is cheaper than going further north).  But why do they want the story to centre on a mine?  They're not interested in miners.  It seems as though they feel the need to situate industry and industrial disputes somewhere regional, somewhere definitely apart from the 'middle England' that aliens are always invading in the Letts version of the late 20th century... but why give the story a backdrop of industry and industrial disputes anyway?  Because it's all industry's fault, all this "muck" and "devastation" and "death". 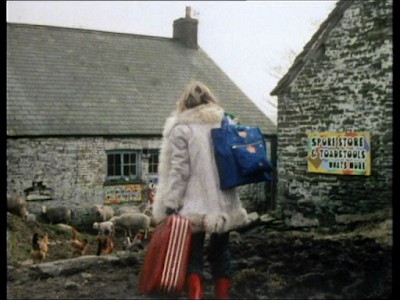 The story certainly notices capitalism as being 'behind' industry - hence the story's Weird inflection - but it also seems to think that the real problem is that certain kinds of capitalism have predominated over other, better kinds.  The Nuthutch, crucially, has a sign advertising the sale of healthy, hippy, veggie foods.  Enterprise, when stemming from a liberal education, scientific enlightenment, social conscience, etc - can save the world with soya.  It's the Linda McCartney theory of progressive capitalism.  (Of course, Linda McCartney and Anita Roddick are all big business really, not little rural cottage industries, notwithstanding the anti-industrial fantasies of a particular breed of right-on bourgeois liberal.)  'Industry' on a big scale is BAD... but little islands of bourgeois right-onitude can correct this, especially when they are powered by a nice version of enterprising individualism (i.e. all that self-actualizing that goes on at the Nuthutch) and especially when also assisted by the UN and government grants, etc.  I'm glossing and simplifying like crazy, but the model embodied in the Nuthutch is hardy a billion miles away from the small-scale, regional economies proposed to supplant 'industrial society' by the Goldsmithian ecologists.

As I said elsewhere, the 'critique' of capitalism in 'Green Death' is decidely diffident.  Most egregiously, by representing the miners as clueless fossils and making them into the dupes of Stevens, Letts and Sloman obfuscate the class struggle and implicate the ex-miners in the crimes of 'Industry'.  (This, again, is hardly a billion miles away from the problems in Goldsmithian eco-politics.)

Also, and perhaps most obviously and crudely, the story shows us casual, routine, pro-corporate bias in the Cabinet Room... but also postulates a 'Minister of Ecology' who, in the long run, seems to represent a government that can, when needed and persuaded, put aside loyalty to business and genuinely care more about the environment.  Which is Panglossian, to say the least.

It'd be easy to overstate all this, however.  Much of the interest of 'The Green Death' is in its manifest failure to offer anything approaching a unified and coherent set of underlying ideas.  It is one of those stories that manages to be fascinating because it tries to pull in lots of different directions at once, fails and falls apart. 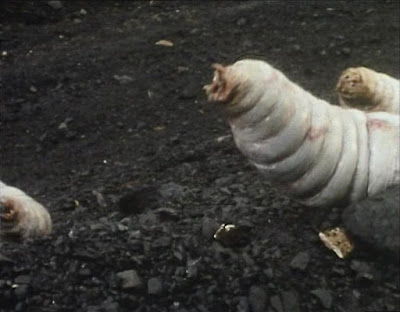 Firsly, the world in which Letts and Sloman situate their critique of 'industry' is oddly post-industrial.  The miners are all sacked.  The mine is closed.  There are extended sequences set amidst the abandoned ruins of industry.  The chemical plant is oddly empty, except for security guards and a very few executives.  The maggots wriggle out across a featureless, entropic, post-industrial landscape of slag.

The pollution that we should really worry about comes not from the mine, not from old-fashioned manufacturing industry, but from the Stevens Process, the magical juggling with chemicals in labs, seemingly accomplished by a skeleton crew of middle-class professionals.  Stevens, moreover, is not an old-fashioned capitalist.  He's no pit owner of yore, no more than he is a Coal Board official.  He's an administrator, a manipulator of executive practices, PR, lobbying, influence, delegated tasks, etc.  This is, in its way, strangely prescient of the outward features of neoliberalism... which was, after all, just getting started roundabout 1973.

Secondly, the story may seem to set out to absolve capitalism of its intrinsic sins - by, for instance, representing pollution as an atavistic regression amidst a general march of progress - but it then shifts gears and produces BOSS, who is an expression of alienation.  BOSS is not only, like so many Who villains, a material thing that has been produced by human labour and then turned upon his creators, he is also an expression of Stevens' own divided and alienated self. 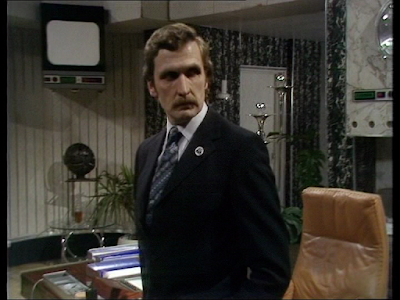 (This, by the way, is why BOSS taunts Stevens good-humouredly about being a "superman" and a "good little Nietzschean".  Nietzsche's notion of the 'superman' or 'overman' would hardly seem credible to BOSS - who openly expresses his exasperation at human inefficiency and his belief that humans need his leadership... and yet BOSS is himself an extension of that part of Stevens which sets aside qualms and goes about trying to be the 'superman'.  The irony is that BOSS, in his/Stevens quest for efficiency and profit (note that they are assumed to be the same thing), must accept his own programming to be inefficient, even eccentric.  BOSS and Stevens go round and round in circles, just like a divided self.) 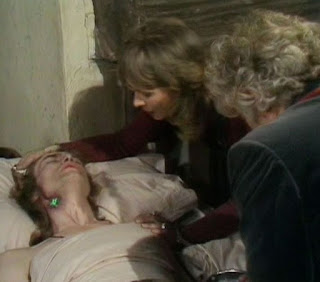 Thirdly, BOSS - and, by extension, Global Chemicals - is an expression of the drive towards monopoly.  Note how, even here, Doctor Who seems to return to the old association of monopoly with the vampiric, an association often noted by commentators upon horror and the gothic.  BOSS is vampiric in that he feeds on the mental energy and obedience of his executives (though not, you'll notice, on any working class labourers) and his maggots are vampiric in that they bite, infect and convert.  (They even bite the neck.)  This is another reason why capital gets associated with the vampire... capital doesn't just exploit (suck blood), it also converts everything into itself (I'll get back to this when I eventually finish my big post about the Borg and the Cybermen).