Posted by: Forest of Illusions 4 years, 3 months ago 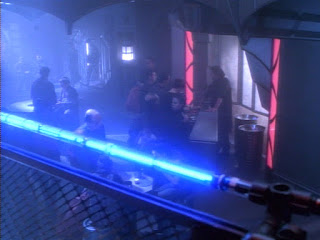 “Necessary Evil” exists in two distinct places within my memory, and they map alongside the two phases of my experience with Star Trek: Deep Space Nine. The first time I was exposed to this story was in 1993 or 1994, naturally, as part of the Star Trek: Deep Space Nine Magazine. Like “Rules of Acquisition” before it and “Second Sight” after it, this is a story I vividly remember from the episode synopsis printed in issue 7. At the time, I immediately recognised it as a modern classic in the making; a wonderfully dramatic noir mystery that fleshes out the backstory of Odo and Kira during the occupation and adds a touching nuance to their relationship in the present day.

It was not, however, an episode I watched on television at the time (or if I did I don't consciously remember it...The imagery certainly feels familiar). The first time I actually got to see the finished product itself must have been somewhere around 1999 or 2000. I'm not sure if Enterprise had been announced or the TNN Star Trek: The Next Generation reruns had started up yet, but either way the winds must have been starting to change: I was over at the house of some friends, two brothers who shared my love of all (or at least most) things Star Trek. One of them made the offhand comment that they had actually taped an episode of Star Trek: Deep Space Nine live at the time as part of a larger collection of programming that also included one or more episodes of The New Adventures of Winnie the Pooh (for younger readers, you have to understand that in those days VHS tapes were capable of holding several hours of video at a time, so it wasn't uncommon to have single tapes that had entire days worth of material archived away. The catch was, of course, that the transfer quality was garbage). Knowing how passionate I was about the series and how eager I was to fill in the gaps in my understanding of this period in my life, the two suggested we give it a watch that afternoon.

The episode they had recorded (of Star Trek: Deep Space Nine, not The New Adventures of Winnie the Pooh) was “Necessary Evil”. I immediately recognised it from the teaser and the name drop of Vaatrik, and I got very excited because I knew this was a good one. Then the credits ran, and I proceeded to be completely bowled over. This was the first time I had actually seen the intro credits to Star Trek: Deep Space Nine in something like seven years, and it was the first time I remember consciously registering what I was seeing. I was utterly taken aback because I didn't remember what they were like and didn't really know what to expect: I guess I was assuming that the theme song would echo the motifs of the Star Trek: The Next Generation theme song in some way instead of being something completely different. But man was I ever glad it was something completely different-I sat in complete rapturous stillness, my jaw most likely open as I watched that asteroid pass by and the camera pan around the station listening to that French horn and synthesizer. If there had ever been any lingering, vestigial doubt in my mind from seven years back it was most assuredly long gone now, because from that point I was completely hooked.

The episode itself did not disappoint. “Necessary Evil” was real, eyes-glued-to-the-set style television for me-I lapped up the dark cinematography, cyberpunk set design and high-angle camera shots over the promenade. For a television show, I thought the production was absolutely sumptuous, the writing and acting were both beyond brilliant and Odo's thoughtful and melancholy narration tied everything together perfectly. Everything felt so dramatically different from what I had come to associate with Star Trek in the interim seven years: Although I hadn't been watching any of it, I still had my reference books, action figures, magazines and the odd video game so I had a working knowledge of what I thought Star Trek had been, sadly mostly gleaned through the lens of obsessive Hard SF minutiae compilers. This was something utterly, wonderfully divorced from all of that, reading not so much as science fiction (or what I had come to understand science fiction to be), but as a serious, provocative drama in a science fiction setting. I think that awoke something in me...Or maybe it reminded me of a primordial state of being I used to occupy but had forgotten the path to long ago.

(Of course, I never used to see Star Trek as science fiction. I saw Star Trek as Star Trek-It was its own special thing, and the fact that it was set in outer space in some imagined pretend future on starships and space station was just part of what it was and what it did. More on that another time.)

I didn't get to see “Necessary Evil” again, or any other Star Trek: Deep Space Nine for that matter, until 2003 when the series started to be released on DVD (actually it was likely a year or so later as it took my awhile to get the second season box set, much to my consternation as that was the one I had the most visceral personal connection to). Once I got up to it, it was every bit as incredible as I remembered. Every time I rewatch this episode or an episode like it, I'm amazed by how aggressively this show doesn't play by the expected Star Trek clichés, although to be fair at this point I'm not even sure what I mean by “expected Star Trek clichés” anymore: I certainly wouldn't call the stuff Star Trek: The Next Generation has been doing this season hackneyed or rote either. But I would hold “Necessary Evil” up alongside any serious and venerated contemporary drama, and in fact it was probably this episode that got me to notice (and be annoyed at) how Star Trek: Deep Space Nine seemed to constantly get snubbed by the snootier critics because it was a drama where the players wore prosthetics and brightly coloured costumes.

Then there's my current revisit. “Necessary Evil” is certainly a triumph for writer Peter Allan Fields, quite possibly his masterpiece. The nuance and depth it affords its cast is obvious, especially Odo, for whom this is his definitive story. Odo is in masterful Columbo mode once again, but he's got a full slate of mesmerizing interiority this time: A shapeshifter who's always striving to stay willfully outside things and is always in search of a shape and identity of his own is confronted with the necessity to pick a side. Odo claims to be on the side of justice, but the mistake he made during the occupation was to associate “justice” with “the law”: For Odo, this is something firm and reliably constant he can fall back on, but true justice is rarely something that neat and tidy, and that's what Kira understands. That's what Kira understood decades ago: The moment Odo tells her that if she didn't kill Vaatrik he'll let her go, but if she did he'll turn her in and that “it's as simple as that” she makes her mind up. But critically, this is something Odo is able to learn from Kira: “Necessary Evil” is what helps us understand how Odo became the person we were introduced to in “A Man Alone”.

The final scene is a work of pregnant textual brilliance. The magazine synopsis talks about a “miserable silence” falling over Kira and Odo and about trust being betrayed, obviously to play to the presumed grimdark conflict demographic. But that's not at all what this scene is actually about-In reality, its an incredibly complex and interpolated moment of utopian storytelling. The key moment is when Kira blurts out that she was afraid of telling Odo the truth because she didn't want it to jeopardize her friendship, and Odo responds “maybe it doesn't have to” (and notice how he smiles when he does so: When Odo smiles, it's only on extremely special occasions, a gift he gives to someone important). Sure, Odo is rattled, but Odo also knows that Kira was right. True justice is rarely pretty, especially when you're fighting for liberation from a fascist occupying force by ratting out collaborators. And Kira only shot in self defense. It's utopian because Odo and Kira are still close friends, in fact, they're probably closer now then they ever were. But going through what they went through to get there was emotional hell.

Ultimately, “Necessary Evil” is a story about forgiveness. Odo forgives Kira for what she did, and Kira forgives Odo for the dangerous golden mean fallacy he used to define himself by. If anything, I'm reminded of the scene earlier this year in “The Circle” where Odo and Kira both talk about how they “smoothed out” each other's “rough edges”. It's also a story about reliving your past to make peace with it (literally in terms of the extradiegetic cinematic storytelling). Coming to terms with our past is part and parcel of shaping the person we want to be in the present, and sometimes a city like this brings it all back to us.
Share on Twitter Share on Facebook

I really remember enjoying how this episode found new ways to tell a Star Trek story.

There's not really anything upon rewatch I picked out as flawed about this episode. Imperfect, but with no major blemishes. I really liked how quickly Sisko sussed out that he could play good cop, bad cop with Odo and Rom by pulling that "he's a family friend" card. In general Rom had a good showing here, actually - we learn a lot about our hard luck bartender Quark via his being injured out and subbed by Rom for most of the plot stuff here.