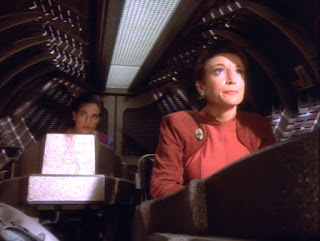 In the previous episode, “The Circle”, Major Kira undergoes an Orb experience and receives visions from the Prophets of the events of “The Siege”.

The Prophets' connection to nonlinear time has already been well documented, but what I find interesting about their reappearance here (for the first time since “Emissary”, it may be worth noting) is the way this is conveyed: Images, experience and snapshots of memory, repurposed and rearranged. It's a dream meant to convey a message through coded symbols built out of memory. My first exposure to “The Homecoming”/“The Circle” /“The Siege” was all in one piece as part of the Star Trek: Deep Space Nine Magazine sometime in either late 1993 or early 1994. So when I watch Kira's Orb vision in “The Circle”, I don't see portents of events to come, but a distorted reiteration of events I already have a recollection of.

“The Siege” itself operates on the level of images. Namely, iconic memorable setpieces. The battle in Bajor's atmosphere between The Circle and the transport runner piloted by Kira and Dax is one of the most spectacular action scenes from Star Trek's golden age, a remarkable series of shots that pushes the boundaries of what can be accomplished with model-making practical effects on an episodic television budget. In fact, I daresay this is probably as complex and striking a scene as could ever have been done at this particular time with these particular resources. Once again, we get another bright, sunny and colourful outdoors setting, conveyed aptly through the use of a matte painting overlayed with shots of the motion controlled models.

But what I remember is actually the interior of the Bajoran raider, and Kira and Dax's outfits: I think the bright colours of the control panels, their clothes and, funnily enough the phaser blasts all really compliment the verdant setting outside and help to convey a uniquel special and memorable vibe. I guess you could say this begins for me what you might call the real “summer blockbuster” phase of Star Trek, which I've always associated primarily with Deep Space Nine, and in particular this season. “The Siege” is really one great big action sequence, but it's got a lot more going for it than most of the other Star Trek riffs on the action genre, and I prefer it head and shoulders above anytime the franchise attempts something like this in the years to come. One of these things is the colour coordination, which really does evoke a breezy, fun summer vibe to me, or at least the memories of that feeling.

There's a deliberate and overt artistry to the action here I don't see in most science fiction, especially Star Trek (and even most action films for that matter). Funnily enough, this sort of thing *is* the province of Dirty Pair, especially Dirty Pair: The Motion Picture and Original Dirty Pair, but actually now that I think about it the other place I can think of right off the top of my head that gives me a similar feeling is...Project A-ko. That film has the same blend of tight, colourful action, comedic dialog and breezy, summery vibes. Deep Space Nine tries to take itself seriously and play up its stakes, but it's hard to fully get on board with that when you're so wrapped up in the spectacle. It's almost comic booky in the most ideal sense, which is probably why both Star Trek: Deep Space Nine from this period and Project A-ko translate themselves so well to the medium. It's probably a good thing it didn't let itself get more swept up in its own excesses here, as it may well have run the risk of rubbing up against the old 80s action sci-fi dilemma. And I don't think Star Trek would make the correct choice when presented with that dilemma.

Either way, it's good to see a resurgence one more time here before it finally goes out of style.

Because the Kira and Dax sections are the part of “The Siege” I remember the most clearly and fondly, they're also the part of the episode I criticize the heaviest. I don't *want* to be critical, and for the longest time I would try and put my concerns and objections out of my mind because I really wanted to pretend this was a flawless run of episodes. There's so much I like about this era of Star Trek that the things I don't like stick out all the clearer and sting all the more painfully. And I have to say, Jadzia is written badly out of character here, and actually somewhat inconsistently. She signs up for the mission because she supposedly has first-hand knowledge of these old-style propulsion devices, but spends the majority of the sequence alternating between being squeamish and uncomfortable and being snarky and disaffected. Terry Farrell of course makes it work, especially in the action scenes, and as the setpiece goes on you can almost talk yourself into thinking Jadzia is riffing on the show, or gently chiding Kira for being reckless. But that's clearly not how it was written.

This scene is using Jadzia as a scapegoat for the creative team's feelings about Starfleet officers, which is really code for their feelings on Star Trek: The Next Generation, and are using Kira as their mouthpiece. So Jadzia is accused of being too “coddled” and “dependent on technology”. “Afraid to get her hands dirty”, as it were. And it just makes my skin crawl. Not only is it a mean, petty, petulant thing to do, and particularly hurtful as it's being directed at my favourite character and meant to implicate my favourite show, this whole criticism doesn't actually make any sense. It doesn't make sense for Kira to say, as her whole story arc in this three-parter has been realising her place is on Deep Space 9 and the blossoming respect she has for her Starfleet co-workers, and it's downright disingenuous considering Commander Sisko, Chief O'Brien and Doctor Bashir are literally fighting in the trenches for her and her people back on the station alone against an army. And furthermore, of all the Starfleet officers Kira could have picked on, Dax seems like the absolute least appropriate one to pick considering she's seven times as old as Kira, has done some pretty rough-and-tumble things in her own past and is supposed to be her close friend.

For a move supposedly designed to critique the clinical detachment and elitism of Starfleet, making the indigenous analog and former revolutionary out to seem just as bad seems like a bit of a misfire.

I remember the action on Deep Space 9 just as well, but from a different perspective. I remember the Kira and Dax stuff (and even my uneasiness with it) contemporaneously with the story, in 1993 or 1994. The rest of the episode I associate more with my watching it on DVD for the first time in 2003. The moments that stand out for me the clearest are the aerial shots from the air ducts and the other upper sections of the set, where Commander Sisko and his guerrilla strike team jump down or leap out from around corners to launch surprise ambushes. Also Sisko's final speech once he's outwitted Colonel Day. These scenes are especially fun in retrospect with some behind the scenes revelations that have come out in recent years, because it means a large chunk of “The Siege” is basically Commander Sisko vs. Captain Picard: Stephen Macht, who plays General Krim, was the frontrunner for the role of Jean-Luc Picard when Star Trek: The Next Generation was being auditioned in early 1987. In fact, he was the frontrunner for so long it ultimately came down to him or Patrick Stewart, and Patrick Stewart eventually won over the producers. This, of course, makes any scene where Sisko and Krim talk about being equals on opposing sides all the more bittersweet.

There was, apparently, debate over what Li Nalas' ultimate fate should be. Although everyone had their own opinion, ultimately the arguments can be boiled down and put into two camps: Ira Steven Behr's camp thought Li should die because he needed to make a heroic sacrifice to give his life meaning and make a difference (and also because he wasn't sure he could get Richard Beymer to commit to a reoccurring role). Peter Allan Fields' camp felt that this was a stupid idea and invalidated the point of “The Homecoming”, if not that of the entire trilogy. Certainly with Li Nalas' death and the breaking of The Circle, it would seem Star Trek: Deep Space Nine's interactions with the postcolonial themes it was created to engage with are coming to an end. Li's absence, in fact, causes the team to scramble to fill a storytelling gap in later years. Even so, I was unsure on whose side I was going to fall upon rewatching it, but I've since decided I have to cast my lot with Peter Allan Fields. Commander Sisko himself sums it up perfectly well in the show itself. When Li Nalas insists he'd die for his people, Sisko says


“Sure you would – dying gets you off the hook. Question is, are you willing to live for your people – live the role they want you to play? That's what they need from you right now.”

Being a role model comes with a responsibility. You have to set an example by living your ideals as a kind of performance art. Real people come with baggage and foibles to be sure, but one way for us to overcome those is to take the best of us, whether what we can see in ourselves or what others see in us, and trying to make that idealism a conscious part of our day-to-day lives. Li Nalas was an ordinary guy, but he was also larger than life. In fact, he was larger than life perhaps precisely because he was ordinary: Ordinary people can be extraordinary if they make the choice to be. And it's hard not to argue that Bajor would be better off if it had a real, flesh-and-blood person to guide, inspire and advise them. Myths and legends can be whatever we want them to be, but sometimes we need a mentor to help us understand the power those myths and legends have and how we can wield it. Share on Twitter Share on Facebook

I like the point you bring us to at the end regarding mentors. One thing I have found so valuable in the last six years has been my mentoring group with a Canadian storyteller for my professional practice. We have not only been taken through often a good, clear critical look at our practice, but also been supported to look deeper at ourselves and our relationship to story and how the myths and tales we work with relate to our own lives. There is no way I could have done this journey alone, and even though the critical insights from my mentor and group at times have been hard to integrate, overall the whole process has shaped me into a more grounded practitioner.