“Morphology of the amorphous”: Vortex 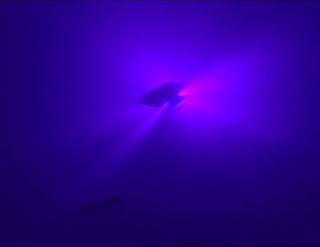 Odo is a shapeshifter. I know that sounds obvious to any fan of Star Trek: Deep Space Nine, but I'm not just talking about his plot superpowers here. Rather Odo being a shapeshifter is a diegetic allegory for the role he plays on the series, and clue as to his character's true nature.

Odo got the first spotlight on Star Trek: Deep Space Nine following “Emissary”, and while it was excellent it was more about the setting of the titular space station itself and inviting comparison with Westerns than Odo himself; it's that “Fort Laramie in Space” again (Star Trek certainly does seem fixated on its precious Hollywood Westerns and seems to want to invoke them whenever and wherever possible). While “Vortex” draws upon Westerns to a significant degree as well: The script took its inspiration from the movie The Naked Spur such that Peter Allan Fields hired Sam Rolfe, the writer of that movie and an old mentor of Fields', to handle the teleplay for “Vortex” (Rolfe had previously written “The Vengeance Factor”, which is probably my favourite episode of the third season, and the script even specifies that Ah-Kel and Ro-Kel had at least two of those gloriously 1980s Gatherers as part of their crew!). But there's more to this episode than simple genre romp pastiche, and “Vortex” is the key moment in establishing precisely who Odo is.

At first, it would seem like he's being depicted as the stereotypical mythic lone gunman Western hero, with Odo, Croden and the script all waxing fairly poetically (and melodramatically) about being an outsider and not having a home to go back to. But this is actually obfuscating pomp and circumstance: Odo is projecting his anxieties about belonging onto his search for his origins. He feels out-of-place with Starfleet and the Bajorans alike and is hoping that if he finds “his people”, he'll finally have a place to belong to (true, but not in the way Odo is conceptualizing it here). But what Odo doesn't realise that the majority of his isolation is self-imposed, and that he's too insular and self-conscious to figure out that his home has always been Deep Space 9. He probably knows this deep down, but he's too stubborn to actually accept, admit and vocalize is to himself, much less to anyone else. So when he asks his pendant at the end about where home is, it's every bit as much of a rhetorical philosophical question as it is an inquiry about a physical location. He's not looking for a place to belong as much as he is looking for permission to admit that the place he belongs is where he's spent the better part of a decade dutifully making a living.

And this does beg an interesting question: Can one actually “belong” to a place like Deep Space 9? The station is, after all, ultimately a port city, and port cities on Earth have traditionally been considered deeply liminal places. Miami is a good example: Its history as a tourist destination built by immigrant railroad workers and its location at the extreme southern end of the continental United States (and thus its proximity to Central and South America-Indeed, Miami is often considered more part of them than it is North America, sometimes to the point of becoming their de facto cultural capital city) gives Miami a history of being seen as the kind of place people pass through. People come to visit, or come to work temporarily to send money back home-Not a whole lot of people actually come to Miami and stay forever. And while Miami remains arguably the most dramatic and unique example you can see similar incidences of this in a lot of other major port cities, like immigrant neighbourhoods in New York City.

But let's not forget that there's power in liminality as well as transience and impermanence, and that liminality can in fact be a state of mind or being. Deep Space 9 reminds us of this subtly all the time through its proximity to the Bajoran Wormhole, the Celestial Temple, and through the existence of Jadzia Dax. Everything is always in flux, and yet everything is also eternally now. When cast in that light, Deep Space 9's status as an interstellar port city thus becomes just another macrocosm and symbol of this selfsame liminal power. And here is where Odo fits, because Odo too is a liminal being, an explicit one. As a shapeshifter, he is infinitely adaptable, able to acclimate himself to any form or climate imaginable. He can fashion himself into anything he needs to be to fit any occasion or situation he might find himself in, and as such could theoretically fit in anywhere he wants to. Which ironically means he belongs on Deep Space 9 more than anywhere else because he's a reflection and manifestation of its own liminal power: Just as we all are, Odo is his universe asserting itself within and as a part of him. Odo is a microcosm of Deep Space 9, and Deep Space 9 is a microcosm of the cosmos itself.

But from a strictly characterization perspective, Odo's shapeshifting symbolizes something else. The fact that he could make himself look like anything and pass effortlessly, yet specifically chooses not to, is quite revealing. After all, why did Odo choose to be a humanoid anyway? Why couldn't he have chosen to take the form of, say, an eloquent and well-spoken hyper-evolved cat beast? Odo chooses to make his face look deliberately unfinished not just as a result of his uncertainty about his identity and his place in the universe, but in an attempt to draw attention to it in a kind of performativity: It's a mask that lets audiences know the role he's taken for himself. His very formlessness is another metaphor: Odo isn't comfortable making up his mind about what exactly he wants to be yet, so he remains permanently fluid and mercurial. The challenge for him is coming to embrace this malleability and liminality instead of viewing it as a curse, because more than anything else that is what makes him belong here. Ironically, it's his very formlessness and lack of understanding about his identity that defines and shapes his character.

There's some other great stuff in “Vortex” as well, apart from Odo's character moments. The effects shots of the titular vortex are really well-done (you can hardly tell the background is all stock footage of the Mutara Nebula from Star Trek II: The Wrath of Khan) and I'd count the battle scenes here among the most memorable effects sequences of the first/sixth season. I also quite like Marvin Rush's lighting in this episode: He's always said the Deep Space 9 sets gave him more to work with then the Enterprise ones did, mostly owing to how much room for shadowplay they allowed. Although that said, a lot of that is due to him having more freedom to experiment with creating his own style instead of having to keep a style consistent with his predecessors in the cinematography department (although with respect to Rush, I don't think he ever managed to make the Enterprise look quite as visually captivating and unique as Edward R. Brown did).

Either way, Rush's handle of the Deep Space 9 sets and their potential to provide high contrast is on full display here. One scene that really struck out to me was when Odo confronts Quark under the stairs of the bar demanding to know the full details of his deal with Croden: There's a lot of shadows on the faces of Armin Shimerman and René Auberjonois, and that combined with the general murkiness of the lighting in Quark's Bar really underscores the tension of that scene. This is what my sensory memory of Star Trek: Deep Space Nine on television looks like-People huddled in dark corners energetically whispering at each other with mildly pointed aggression and a tangible feeling of tension. This is how I remember the scene that finally sold this side of the Star Trek universe to me: Dax swinging on a horizontal bar while Kira tries to converse with her from stage right.

I haven't found this scene in any of the episodes I've revisited yet, and frankly I'm not sure if I ever want to. Some things, just like Odo's backstory, are better left to the ether of imagination. Better to be guided by memory and live in the present.
Share on Twitter Share on Facebook

I haven't got a lot to say about this episode. It's one of the early Odo v. Quark scenarios that really cements the sorts of dealings that they'll always have, but that's sort of been implicit since episode 1 and episode 2.

But what I do like about it is how consistent all the legends of Changelings, the introductions of the words, and the state of affairs on planets like Crogen's in Gamma seem to be with what we'll later learn about Dominion control. It all rings true, in hindsight, and is a pretty unusually high bit of heavy foreshadowing.

Which of course we can say as well of the Tosk Hunter race, the weird prison planet in the next episode, and more. But what I always have to wonder about is the effect of the Celestial Temple on neighboring Gamma space races, and we never really do find out.

Like The Nagus, this is one where I actually remembered some of the plot before I got there; and in my memory it was a particularly strong story. Unlike The Nagus, this didn't make so much of an impression this time around. Don't get me wrong, it's still pretty good; but I think my younger self was more automatically wowed by Big Significant Stories than I am now. That doesn't take away from things like the focal role of Odo; Auberjonois certainly impresses here with his ability to convey the finer points of his feelings through all that makeup designed to flatten his expression.