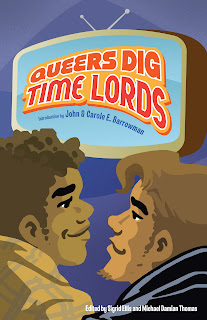 Sorry to throw two book reviews at you in a week, but, well, there were two books to review this week. Next week I'll use the off-day posts for angry polemics or something.

Mad Norwegian was kind enough to offer me a review copy of their upcoming Queers Dig Time Lords. Which is lovely of them. Lovelier, however, is the fact that they actually made the book good.

I mean, it's not like it was a huge risk. Mad Norwegian are probably the best publishers of Doctor Who-related material going right now. Their "As dig Bs" series is consistently and rightly acclaimed. I met several of the folks involved in the original book in the line, Chicks Dig Time Lords, at DePaul, and they were all wonderful. Perspectives on geek culture from people outside the normative band of what fans look like.

But this one is more important than that. I mean, I don't normally want to go for what I've heard memorably described as the Oppression Olympics whereby we try to figure out which repressed group has it worse. And in this case, I still don't want to. But nevertheless... well, let's just look at a quick list, shall we?

John Nathan-Turner, Matthew Waterhouse, Ian Levine, Gary Downie, Peter Grimwade, Gareth Roberts, Russell T Davies, John Barrowman, Gary Russell, Paul Magrs, Mark Gatiss, Phil Collinson. It's not a complete list by any stretch of the imagination. I'm 100% certain there are major figures not on it. It's just a list of prominent Doctor Who figures who I know off the top of my head are gay. And that's just off the top of my head.

Which is to say that there's a particular reason this book matters. Because gay Doctor Who fandom was and is a real thing. The reasons for this are not simple, but are at least articulable. Paul Magrs has a fantastic essay leading off this volume that does it - basically, between the lack of overt sexual desire on the part of the Doctor and the high camp of the series, it became very, very easy to perform a queer reading of it in which the Doctor is closeted. And many did. But note also that there's no coherent approach or vision of Doctor Who across that list: it's next to impossible to imagine any opinion on Doctor Who shared by Ian Levine, Gareth Roberts, and Mark Gatiss. Gay fandom is not some monolithic bloc of approaches. It's just very large, and has been around for decades now, albeit without any real acknowledgement from the series.

This is one of the very important things about The Empty Child/The Doctor Dances - it marks the point where that closet is finally detonated. And detonated in an explicitly queer way - the episode goes out of its way to confirm that the Doctor is not just a straight bloke. Whatever one might think about having a sexualized Doctor, it has to be understood: there's a huge, huge group of fans who put a lot of effort into the program for whom the Doctor's final "who with" is the cathartic endpoint of decades of marginalization.

Queers Dig Time Lords is not a book about saying things like that, though. At least not at length. It's a book about people's stories and the role Doctor Who has played in their lives. It's not an academic tome of soaring ambition and complexity. Who would want something that twee anyway? This is a fun anthology to read an essay or two out of a day over the course of a few weeks. It's not the analysis of why The Empty Child/The Doctor Dances is so important to the history of gay Doctor Who fandom. It's the story of people watching it and realizing that their moment had come. And dozens of other stories. It's effectively an oral history of queer Doctor Who fandom, including the gay male fandom scene of the 80s and 90s that proved so influential in bringing the program back, but also including queer fans of the new series, gays and lesbians who liked the series but weren't active in fandom while it was off the air, and most other angles.

We have surely gotten to the point (he says with maximum irony) that we do not need any more episode-by-episode surveys of Doctor Who - the episodes themselves are so widely available that there's virtually nothing left to do in terms of recounting what Doctor Who is. This is what a useful book on Doctor Who looks like in 2013 - not some anniversary nostalgia piece but a document that shows its impact on the world.

Put another way, this is the secret of Doctor Who's alchemy - the impact it has on the world. Its material social progress. It's probably the most important book on Doctor Who that's coming out this year.

I'm slightly surprised you didn't mention Waris Hussein in your list - he stands out for me as an originator, whereas most of yours were inspired to get involved by what was, in part, Hussein's legacy. (But don't take that as a criticism, because it's not. Just an observation.)

I'm really glad Lars Pearson and co keep putting out these books (though the one I'm fantasising about is Ahistory 3.0, which I will certainly get at some point).

One thing I've noticed about these in-between posts is that they work, quite cleverly, to curb what could be an overwhelming number of comments now that we're into the revived series. Nice one!

Have you perchance read the New Adventure "Bad Therapy"? I would be VERY curious to hear your reaction to it, specifically in the context of this post.

Point of Order: Eruditorum Press is the best publisher of Doctor Who related material right now.

Whoa, when did Waterhouse come out?

This. Absolutely and completely this. I don't always comment (I'm a touch outclassed here) but I read every article and love every single one. It's wonderful to have such intelligent, erudite commentary and analysis both from the good Doctor himself (Philip, that is) and the cohort of commenters. Much respect and love to you all!

I'm not sure Waterhouse was ever exactly "in". In any sense.

I'm really looking forward to this book, and hoping they release it in electronic form as well, since that's where I do a lot of my reading these days.

I don't think I ever got from "The Empty Child"/"The Doctor Dances" that the Doctor wasn't a straight bloke. It's very clear now that I need to watch that again. I don't think I'll find that a hardship.

Really? He was flirting with Jack as much or more than Rose!

That's terribly kind of both of you, and I am proud of what I do here, but Mad Norwegian have this line, About Time, Running Through Corridors, and aHistory. I'm honored to be considered in the same class as any of them, but the idea that my output outstrips the combination is simply absurd. :)

As I said, I knew the list was absolutely incomplete. That would be the most high-profile omission, however.

And given that we're routinely breaking a hundred comments on episode entries and hit 53 on The Monsters Inside, I'm not sure how well the curbing is going. What I'm interested in is how Saturday Waffling will go when there's not a new series episode to talk about. Sunday Pancaking is still a not-quite-dead thread, and if you combine its comments with Saturday's that's our biggest discussion ever. Whereas this weekend I'm nervous we'll have an open thread that nobody bites on. :)

Oh, I think the comment count would be even bigger without the inbetweeners. Though I have no hard evidence for that, of course.

I have an idea for a comment on Saturday that may (or may not) provoke some discussion - one that I've been postponing, since I knew it would just be swamped by current episode debate. I hope so, at any rate.

From my point of view there's one key difference: I am at a " Shut Up and Take My Money" level with you. I would describe myself as a fan of your work. Your recommendation is enough for me to go out and hunt down obscure books. To my mind you are the finest critical mind in Doctor Who.

That Guy 7 years ago

Actually, since Rob Shearman reads this occasionally (and other people might know the answer) - anybody know what's happened to volume 2 of Running Through Corridors?

I do, actually. As of about a month ago he was taking a final editing pass on it.

The philosopher Hellwig spoke wiser than he knew, being a demented steroid-freak, when he said "Queerin' don't make the world work." By definition, queering makes the world play.

Good recommendation. I'd also like to recommend The You and Who series, published by Miwk, who have recently gotten much more publicity for their JNT bio. In the first volume, I have an essay that would apparently have fit well into Queers Love Time Lords.

I watched these episodes again, and yes, they're quite good. But there's only one line that I could possibly imagine interpreting as the Doctor flirting with Jack, and even that one (" I'm sure he would, Rose. I'm absolutely certain. But who with?") reads more like a tease than a flirt. Are you sure you're not thinking of a later episode?

At the time, I certainly read it as a similar kind of mildly jealous sniping as "He's your boyfriend" with Adam back in 'The Long Game': an attempt to diffuse the fact that he feels a bit threatened by Rose showing interest in Jack. But the way that he deflects it -- essentially by allowing himself to become a target for Jack's interest -- is fantastic.

It still sounds like a snipe to me, one that doesn't actually imply any interest on the Doctor's part, but a good-natured peace offering sort of snipe.