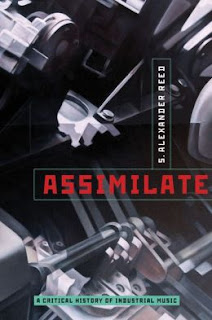 Well, bizzarely it seems I might just be the target audience for this. I loved TG in the Seventies and Eighties and had a number of encounters and correspondences with Gen P. both through performance and socially (He lived in my home town, Brighton, for a while). I also made industrial/experimental music with my band EJK454F and my flatmate still does in various guises. I now teach Drama and Performance and am still obsessed with 'the interplay between the margins of the avant garde and mainstream popularity, and the way in which radical thought, whether aesthetic or political, must endlessly traverse that gap in order to make any sort of progress.' 'checkI' ll check this book out. Thanks.

Hm, my brother-in-law might be interested. I'm not very up on the musical boundaries: does it cover electro-industrial like Skinny Puppy and Front Line Assembly? If so I can see a potential birthday present.

I've never understood what he sees in it, myself, but I don't judge him for that. As almost the only person I know who loves Hawkwind (other than Internet acquaintances) - and certainly the only one who is also into Tangerine Dream, Fairport Convention, Judas Priest, and P.D.Q. Bach - I have decided that personal taste is just that. Personal.

It does, in fact, cover both thoroughly.

Having amassed a sizable collection of Throbbing Gristle and Cabaret Voltaire, I feel it is highly necessary to acquire this book on one of my favorite genres of music. Hopefully there are some more obscure artists covered. I’m always looking for more music to fill up space.

And for the guy who likes Tangerine Dream and P.D.Q. Bach, you're not alone.

Thanks - I shall suggest it to my wife...

Normally when you tell me to go read something Doctor S I go out and find a copy right away (still working on finding a good copy of Christmas on a Rational Planet). You have never steered me wrong.

But to be honest, I HATE industrial music. I like some NIN but that's mostly Year Zero and mostly because I found the ARG surrounding it fascinating.

On the other other hand the world could always be a stranger and more fascinating place. WISHLISTED!

I freely admit that part of the appeal of the book is that you get all the intellectual pleasures of industrial music without any of the unfortunate business of listening to it.

Why didn't I think of THAT as my main marketing angle?

I'm afraid I can't help but imagine a Dalek shouting that title... :-D

In general I feel at least a small obligation to be familiar with the source material when reading criticism. Reading Medieval texts on classics from people who had never actually read the original was the most eerie part of my Undergrad.

I have the Amazon page open right now and I fighting the urge not to spend the last of this month's entertainment budget on it. I do so love the phrase "All the intellectual pleasures of industrial music without any of the unfortunate business of listening to it."

Presumably the title is a reference to the classic Skinny Puppy track "Assimilate", in which case the vocals do indeed sound like a Dalek shouting the title. http://www.youtube.com/watch?v=jtnTjvvT_ig

This track is not that difficult to listen to either, it's almost synthpop/dance club music, just the vocals take a little getting used to. (They would indulge in much more difficult/noisy fare later on in their career.)

Would it surprise you, elvwood, to know that Hawkwind were included on the first collection of industrial music I bought?

Anyway, thanks for the recommendation Phil. I'm a fan of all the music mentioned in this thread (well, except Judas Priest, but there had to be an exception) and love critical analysis of music so this is going straight on my purchase list (along with the book on Flood).

I know... a bit late for a comment... but here goes anyways.

I'm a big Doctor Who fan, so it was with delight when I was sent a link to this particular review, I discovered the main thrust of your page.

What do you think about Delia Derbyshire as a proto-industrial musician? I think the incidental music from Doctor Who, especially Hartnell-Pertwee era, subliminally affected me, and that is why I love experimental, industrial, musique concrete and noise. Just a thought.