Skulltopus 4: Attack of the Plot-Device Monster

The tentacle was already well established as a staple of monsterology long before Doctor Who was even a glint in Sydney Newman's eye.  When Who selected the tentacle as its semiotic method of evading/signifying capitalism  - as I'm going to argue that it did in the 70s - it selected it from a pre-existing toolbox full of potential signifiers.  But it didn't suddenly stumble upon the octopoidal.  It had encountered tentacles before, albeit only occasionally.

On the whole, the show's early years are pretty thin on tentacles... but there are quasi-tentacular manifestations in 'The Keys of Marinus' (the Brains of Morphoton have stubby little almost-tentacles), 'The Dalek Invasion of Earth' (the Slyther) and 'The Web Planet' (the Animus).  The only proper octopus monster in this era is the Mire Beast from 'The Chase'.  It lives underground and exists solely to provide a way for our heroes to escape from the Aridians without deliberately sentencing them all to Dalek-death.

Oh look... bar the Animus, those were all written by Terry Nation.  Hmmm...

By this point (the early 60s), the 'novum' of the tentacle had passed, but it had entrenched itself in the grammar of Western teratology.  In the process, it had been greatly sheared of its original strategic meaninglessness.  Even so, the Mire Beast doesn't even try to mean anything.  It's almost as though a plot device monster so arbitrary and irrelevant had to be an octopus because the octopus still carries the Weird connotations of meaning meaninglessness.  It means nothing, so what do we make it?  An octopus.  They mean nothing.  Perfect.

I'm simplifying.  And I'm making it sound conscious... which it almost certainly wasn't.  But I'm kind of thinking aloud here.  Give me a break, can't you?  These things become less conscious and more consistent the more deeply the semiotic connections bury themselves into culture.  They become like syntax.  We don't usually use syntax consciously.

Of course, 'meaning nothing' and 'having no meaning' are not necessarily the same thing.  The symbol '0' means nothing... but it doesn't have no meaning.  Indeed, it's meaning is nothing.  (This point is hard to get across in text... it's one of those occasions when, to be absolutely clear, you really need to use vocal inflection.)  This may be the same binary inherent in any sign that is adopted to evade meaning.  It may be inherent in the Weird use of the tentacular.  By trying to use the meaningless to mean meaninglessness, meaning is assigned.  This is as much a dialectic as it is a paradox.  The internal contradiction drives the change from the haute Weird tentacle to the tentacle as a standard monstrous limb-type throughout Western fiction.  The tentacle initially emerges as the perfect way for the Weird to express what it feels to be the incomprehensible and meaningless horror of modernity via its 'novum', its unprecedentedness in Western literature, its semiotic emptiness.  However, the meaninglessness of the tentacle becomes its meaning... or rather, it's most prominent feature.  Its very arbitrariness allows it unfettered entry into almost any context, sometimes even conferring an advantage upon it when someone like Terry Nation is looking for a default monster that will have nothing to do but get the writer out of a plot cul-de-sac, or look cool.

It sounds like I'm having a go at Nation... but, actually, I think his selection of the octopus, his insertion of it into such an inappropriate context (an octopus that lives underground on a desert planet... I mean, what the fuck?), and for such a menial narrative task, actually redounds to his credit.

Pastiche is essential to Nation's method (and to Who's in general).  Nation tends to get a bad rap these days and.... weeeeell, yeah, okay, he's a very inconsistent writer.  But, he could be very canny, especially about how exactly to mix 'n' match the stuff he... *ahem*... utilised. And he's by no means as constantly derivative as some might claim.  He can sometimes work magical feats of selection and synthesis. It shows in his selection of the octopus as a creature of incoherence and meaninglessness, fit to appear in such an inappropriate context and for such an empty reason.  Like the original Weird tentacles - H. G. Wells' giant squid monsters in The Sea Raiders... which just appear, wreak havoc and bugger off again without any explanation - Nation's Mire Beast just eats, shrieks and leaves... as does his Slyther.

'The Chase' features a section which parodies hauntology in the form of robot versions of Dracula and Frankenstein in an amusement park.  In that section of the story, Ian even perfectly expresses the essential nature of the hauntological: "it's uncanny, strange and weird... but it is familiar".  As noted, the tentacle is also pretty "familiar" in Western monsterology by the early 60s, but nowhere near as familiar as Dracula.  The tentacle still looks incoherent and evasive compared to the monsters in the haunted fun house, which are revealed to be nothing but exhibits.  The Doctor seems wedded to an old idea of the hauntological.  He thinks the fun house was a kind of materialised 'collective unconcious'.  Actually, it was a closed repository of dead and obsolete gothic figures.  Next to the craptastically 'old skool' gothic robots in the amusement park, even the Mire Beast looks vital, scary, menacing. I don't think the implicit comparison is insignificant.

The next thing that occurs to me - and I'm as surprised to find myself going this way as you probably are - is that maybe, when he was casting about for a plot-device monster, Terry Nation not only adroitly selected the tentacular (with its blank function inherited from Weird meaninglessness) but also laid the groundwork for the connection that I think Doctor Who (via Robert Holmes) made in the 70s: the tentacular as an evasion of - and, paradoxically/dialectically, a symbol of - capitalism as a system.  He found, in the tentacular, a kind of 'blank sign' which he could press into service... and then something else happened.  His (admittedly injudicious) semiotic literarcy started to lead him places...

Look... even I am not prepared to argue that 'The Chase' contains the basis for a systemic critique of capitalism, except perhaps as an illustration of the idiocy that capitalist culture can produce... however, it is interesting to note that the very first Doctor Who story to feature an actual octopus monster also features depictions of Western rulers (i.e. Elizabeth I and Abe Lincoln, who also appeared in Madame Tussauds in 'Spearhead from Space'), has a section set in New York (the financial hub of Western capitalism) and specifically atop the Empire State Building, and has another section aboard the Mary Celeste (a merchant ship carrying cargo for international trade).

We might also note the section in which we see mini-tentacles in 'The Keys of Marinus' also features a world of luxury and plenty which, seen without brainwashing, is a tatty world of exploitation and lies.  The gorgeous fabrics turn out to be "dirty rags", the amazing scientific instruments are actually chipped old cups, etc.  The very first intrusion of the weird tentacle, in only this very minor way, is conjoined with a story about people being mentally influenced (to live in luxury or to be handmaidens, etc.), about people being controlled by unseen forces, about people being tricked into viewing their austere world as a paradise of freedom, leisure and plenty, about a wealth of commodities (food, clothes, equipment) that is actually illusory. 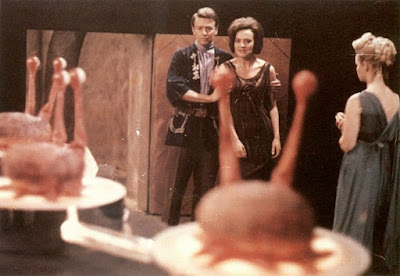 Nation's noticeable personal lack of aversion to capitalism notwithstanding, it's extremely tempting to connect Morphoton to Western capitalism, given that, when this story was made, the long post-war boom was just starting to decline, the struggles of what would come to be called 'the 60s' were just beginning, etc.
Even the Slyther in 'The Dalek Invasion of Earth' turns up at the point in the story (geographical point and narrative point) where we start to see people's labour being exploited by Daleks who suddenly look like colonial masters of a subdued native population.  The Slyther appears at roughly the same time we encounter the two women in the shack and Ashton... all of whom are engaged in trade, exchange in commodities for profit.
*
The Animus in 'The Web Planet' is a little more complex.  This entity has looked very Lovecraftian to some, to the point that it has been identified as Llogior from the Cthulu Mythos in various New/Missing Adventures novels.  I'll (hopefully) be looking more closely at the Animus - as it relates to the Weird - in another post. Share on Twitter Share on Facebook