“May there always be an Angel by your side”: Dirty Pair: Flight 005 Conspiracy 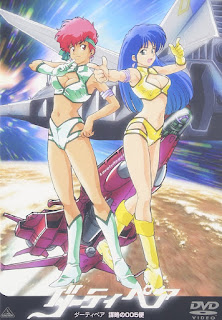 This is the final Dirty Pair movie. The final Classic Anime. The final performance of Kyōko Tongū and Saeko Shimazu as Kei and Yuri. And it's time for us to take stock of just how far we've come and where we might be going from here. Because while Dirty Pair does not end with Flight 005 Conspiracy, a very important part of it does, and this is where the Lovely Angels bid Vaka Rangi farewell: Transcending our narrative one last time in search of their next adventure together.

The existence alone of Dirty Pair: Flight 005 Conspiracy is something of an oddity. In the years since the release of Dirty Pair: The Motion Picture in 1987, the franchise had been slipping into more and more of a decline popularly, falling ever more out of the public eye as audiences and tastes began to change. There's a marked dropoff in, say, promotional material and tie-in merchandise from the release of The Motion Picture, through the OVA series to this movie that tracks alongside Dirty Pair's inescapable slide into obscurity. In fact, there was next to no promotion for Flight 005 Conspiracy at ...

“And I think it's gonna be a long, long time/'Till touchdown brings me 'round again to find...”: No Need to Listen to the Bad Guys. We are Space Truckers!


What could I possibly say? This was perfect. A perfect story serving as a perfect capstone to a perfect show. Words fail me trying to convey the mixture of emotions I'm feeling right now.

There really could have been no better way for Original Dirty Pair to go out. A finale that knows it's a finale and knows the promises it must reaffirm. Who else could Kei and Yuri be but Space Truckers? Sure, they're technically undercover again, this time to infiltrate an independent truck company on the verge of folding due to corporate pressure, but it feels a little bit different this time. There's no obvious diegetic guise the girls slip into here, and they certainly don't seem to be acting very hard. Indeed, Kei and Yuri are for one final time handled perfectly, and this might be the story that shows their relationship in the best and purest light. They're just being themselves here, which is the boldest, most brazenly revolutionary thing they can do. And they clearly relate to ...

“Never go to war. Especially with yourself.”: Red Eyes are the Sign of Hell

Just like its main characters, Dirty Pair as a franchise is an expert in the art of obfuscating comedy. On the surface, this series seems to the uninitiated to be the most ridiculous thing ever, and even the title story of The Great Adventure of the Dirty Pair played out very much akin to a straightforward parody of pulp sci-fi and space opera tropes, and even of Haruka Takachiho's own Crusher Joe. It's probably because of this that Dirty Pair possesses the hyper-niche, marginal status it does. This *also* means that Dirty Pair is able to quietly do something flagrantly radical and openly experimental and go completely unnoticed and uncredited except by a handful of ardent admirers because it's not the kind of series that sort of thing is necessarily expected of.

Just as Kei and Yuri can make wisecracks and giggle disarmingly in the middle of a crisis, so does Dirty Pair's reputation keep it as fiercely marginal as its heroes themselves are.

Which is why episodes like this one are Dirty Pair's secret weapon. “Red Eyes are the Sign of Hell” is, without question, the ...

“Defrosting Ice Queen”: That Little Girl Is Older Than Us. The Preservation Was a Success?!


It might be worth taking a little time to look at the way Original Dirty Pair was first distributed to viewers. This is, of course, an OVA series: Far from the stigmatic connotations direct-to-video works have in the West, Japanese OVA programming is best seen as an early precursor to something more akin to Netflix Originals or Amazon Prime Studios-Shows that have a vocal and loyal enough audience worth catering to, but one that's not big enough to justify trying to pitch the show to a major network. In addition, this would be the medium of choice for more unconventional, experimental works that would be hard to sell anywhere else.

The thing about OVA though is that, as the title might suggest, these were things released only on physical home video media, which meant you had to actually go out and buy each new release as it hit store shelves. In the case of Original Dirty Pair, the show was spread across five volumes of VHS and Laserdisc, each with two episodes each. Today's episode, “That Little Girl Is Older Than Us. The Preservation Was a Success?!”, was released on ...

“And let the past remain the past”: Revenge of the Muscle Lady!


The thematic framework Dirty Pair inherits from Japanese women's professional wrestling cannot be overstated. The inherent and accepted performative artifice of puroresu is absolutely central to how Dirty Pair operates at a basic level, as is the genre's target demographic. As an anime or manga, Dirty Pair is typically understood as seinen in the usual system of genre classification: This would be works specifically aimed at men between the ages of 18 and 40. Except...that can't really be true, can it? In Japan, the original market for women's professional wrestling was women themselves, and the wrestlers became icons to a generation of teenage female fans: Men were a periphery demographic. And so it is with Dirty Pair, which, while later appropriated and stolen by men (as men always do to things targeted towards women and have done throughout recorded history), certainly must be seen as a series written with an at least significantly female audience in mind.

Dirty Pair has done pro wrestling before, of course; There's no way it couldn't with its lineage. We have an entire chapter dedicated to Kei narrating a wrestling ...

“Someone who's loved you forever”: Are You Serious?! Shocked at the Beach, Wedding Panic!


This is the moment where Original Dirty Pair finally lives up to its title.

“Are You Serious?! Shocked at the Beach, Wedding Panic!” is a very Yuri story. Structurally, it's extremely reminiscent of the other big stories that have focused specifically on her as a character, namely “The Curse of the Backwoods Murder”, “Gotta Do It! Love is What Makes a Woman Explode” and “Something's Amiss...?! Our Elegant Revenge”. As was the case in each of those past adventures, Yuri becomes entangled in a love story that plays out very much akin to stock or cliched Harlequin fare, with Kei becoming the third wheel. Part of Yuri really wants to just completely immerse herself in the romantic atmosphere of it all, because she does have an attraction to that sort of mushy stuff and wouldn't necessarily mind living a quiet and charmed fairy tale life like that. This time, she falls in with the second son of a notorious mob family involved in a counterfeit operation the girls have been sent in to bust. She goes along with it mostly to keep up her undercover identity and gain access ...

Dirty Pair has historically not been good when it comes to gambling or games. Any kind of games: Casino games, card games (unless the Bloody Card is involved), video games, the lot. Despite “Go Ahead, Fall in Love! Love is Russian Roulette” being an early highlight of the TV series, “The Vault or the Vote? A Murderous Day for a Speech”, which saddled Kei with a crippling gambling addiction basically for shits and giggles, gets *my* vote for quite possibly the single worst bit of filmed Dirty Pair ever made. Even the first chapter of “The Case of the Backwoods Murder” from The Great Adventure of the Dirty Pair bugs me a bit, because Takachiho seems to cluelessly conflate video arcade games with gambling, and as someone who has very fond memories of afternoons spent in such places and for whom video games as a medium became dreadfully important, it left something of a bad taste in my mouth. I know Japan has a much stronger tradition of linking arcades ...

“It turned into a pig”: Who Cares If They're Only Kids!

One lingering consequence, among many, of the damagingly retrograde social norms of the Victorian age has been an idealization and objectification of children. Drawing on sources as seemingly disparate as the scripture of the New Testament and Rosseau's notions of the blank slate and social contract, the Victorians reconceptualized childhood (some would say invented and defined it) as a time when human beings are inherently good and innocent, free from the poisonous influence of cynical adult society. What this does, of course, is only facilitate the oppression of children and the removal of their agency, because “The Children” in the monolithic general must be looked after, sheltered and protected. It's another manifestation of what Lee Edleman calls reproductive futurism, an oppressive ideology where one is shamed out of political agency out of respect for idealized future children.

This project itself is not immune to this reading. I've several times used the word “childlike wonder”, though not in ignorance of what I was saying, I might add, and I certainly do have a fixation on children's literature and people who place heavy emphasis on children's ...