Where No Book Launch Has Gone Before

After a maddening series of missed deadlines and technical setbacks, I am very pleased (and somewhat relieved) to announce that Vaka Rangi Volume 1 is finally available as a physical book you can actually purchase and own: My acknowledgment of Star Trek's 50th Anniversary this month.

This volume collects the Vaka Rangi essays from 2013, which covered the first decade of Star Trek's history from just before “The Cage” in 1964 to the end of Star Trek: The Animated Series in 1974. So inside you'll find critical essays on every episode of both of those shows and a re-evaluation of Star Trek's emergent fandom in the 1960s and 1970s alongside “Sensor Scans” on pop culture artefacts of the time apart from Star Trek. Speaking of, one of those Sensor Scans back in the day was of the German cult classic TV series Raumpatrouille Orion that debuted at the same time as Star Trek and had a very similar premise, but was nowhere near as well-remembered. The book version of Vaka Rangi Volume 1 includes a brand-new section on Raumpatrouille Orion, with new essays for each of that series' episodes as well.

Apart from the new Raumpatrouille ...

Hey Dirty Pair fans! All three of you! Guess what?

I just found out something really exciting: It turns out Nozomi Entertainment, one of the rights-holders to the English language version of the Classic Anime Series, has been putting up complete, *subtitled* versions of Dirty Pair: Affair of Nolandia, Original Dirty Pair and Dirty Pair: Flight 005 Conspiracy on its official YouTube channel all summer! You may recall that these were among the releases Manga Entertainment chose not to include in subtitled form among its own uploads of the Classic Anime Series, so it's a really big deal to finally get these versions in free, legal streaming form.

The TV show never received an English dub because it was localized on the cheap and only very recently, so this doesn't apply to the Manga Entertainment releases of those episodes,  but this is, to my knowledge at least, the first time folks who prefer to stream their visual media over the Internet have had to watch these later Classic Series Dirty Pair anime productions with the original Japanese language track and English subtitles. I've updated the video embeds on all my posts about those episodes and movies ...

Yesterday's post on Flight 005 Conspiracy is Vaka Rangi's final word on Dirty Pair. Some of you are no doubt rejoicing at this news. For the rest of you, since I've now finished the entirety of the Classic Anime Series I've whipped up something special: It's called The Ultimate Dirty Pair Episode Guide Master Post.

Perhaps my writing has inspired you to take a trip through Dirty Pair yourself, but are unsure where to start. If that's the case, then this is for you. If you're new to Dirty Pair and are looking for a reading guide to get you started, this list should have everything you need: It's a complete, enumerated, categorized breakdown of every single story of note from the original novels and Classic Anime series (that are also in English) I've curated to be as definitive an experience as I can provide. I've also provided links to where you can watch the show online, buy the books and DVDs as well as my own posts on each story I've highlighted. Think of it as a Greatest Hits compilation and an introductory course in one.

Posted by: Forest of Illusions 7 years, 8 months ago 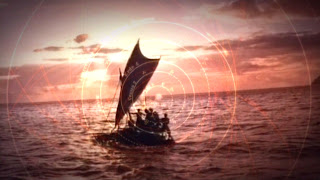 What is “Vaka Rangi”?

The name Vaka Rangi comes from the common language of the Polynesian islands and the area making up the larger geopolitical region known as “Oceania”. Although each region in the Polynesian triangle has its own variations on it, it is commonly believed all of these dialects can be traced back to a common language, which would account for the striking similarities to be found in all of them.

The Ancient Polynesians and their ancestors were simply put the greatest mariners the world has ever seen and the term vaka (meaning canoe, or canoe hull, in several languages) displays the centrality of the concept to their culture. Spurred on primarily by limited resources and the need to manage sustainable populations, the Ancient Polynesians used voyaging canoes to settle remote and previously unpopulated islands throughout the Pacific Ocean, and many scholars claim they further managed to reach any shore that touched the Pacific and Southern Oceans. The Ancient Polynesians were explorers, navigators, poets, mystics and philosophers, not conquerors or empire-builders: For them, each vaka was not merely a watercraft or a means to an end, but a microcosm of Polynesian society and an island unto itself symbolizing the ...