“This is our world, the world of the Information age”: In the Hands of the Prophets 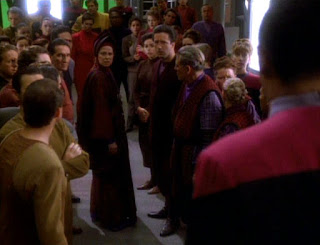 In his Network Society trilogy, sociologist and Neo-Marxist Manuel Castells argues (among a great deal other things) that the titular concept, referring to the sociocultural, political and socioeconomic restructuring of the world and its methods of production through globalization and information technology, will inevitably, and perhaps ironically, lead to an increase in fundamentalism and violence beget from it. The argument goes that, far from opening up their eyes to a literal new world of possibility, those inclined towards a reactionary fundamentalist movement will, when exposed to new ways of thinking through globalization, instead dig their heels in even further and violently lash out against a perceived threat to their way of life.

Writing in 1998, and again in 2010, Castells seems ahead of his time, and I've often thought he got a beat on the direction the geopolitical climate was going well before it became evident to all of us. Living as we do in an age where it seems the world is poised on the brink of war between various assorted fundamentalist terrorist organisations and equally reactionary state governments, Castells seems downright prescient. And, airing in 1993, so does “In ... 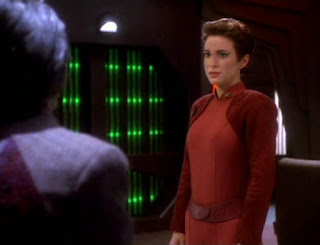 The biggest reason why this episode is so phenomenally successful is that it's completely unafraid to do something that Star Trek in general, and Star Trek: Deep Space Nine in particular, can do effortlessly well so long as it's given the chance. “Duet” is a bottle show, one of many commissioned at the back end of the season to make up for the ludicrously expensive and overbudget episodes from earlier on in the year (c.f. “Emissary”, “Move Along Home” and ... 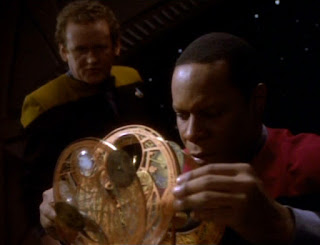 The title says it all: “Dramatis Personae” is an exploration of performative themes, which on the one hand is nothing new, but on the other this episode is more textually overt about it than most. Writer Joe Menosky's original idea was inspired by his observation that people tend to follow a kind of socially approved (and very, very stock) script whenever major life events happen, and there seem to be a very slight number of scripts generally available. This means that, no matter how different and unique the individual circumstances are, absolutely everyone's story about, for example, falling in love is going to sound exactly the fucking same. Menosky ...

“We never touch but at points”: The Forsaken 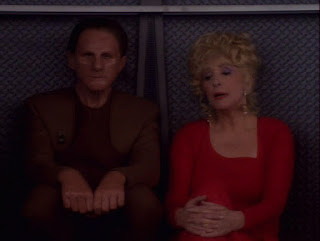 So I miscounted a bit when I was planning these entries. Star Trek: The Next Generation and Star Trek: Deep Space Nine do run completely parallel, beginning and ending their seasons roughly the same week. However, when Deep Space Nine premiered in January, 1993, the studio held production on The Next Generation back a few weeks so the new show could air four episodes in a row without any potential competition for attention. I, however, missed that when I was planning my watch schedule and went straight from “Emissary” to “Ship in a Bottle”, thus neglecting the fact that “Past Prologue”, “A Man Alone” and “Babel” all went out before that episode aired.

Which means we have to go back in time a bit for “The Forsaken”. Technically speaking, having just watched “Descent” we should be passed “In the Hands of the Prophets” and into the between season material by now, but I have to make up those four episodes somewhere. But it turned out OK after all because “The Forsaken” is a great episode to kick off a brief Star Trek: The Next Generation hiatus on the site, and I like ...

“Everything is alive”: If Wishes Were Horses 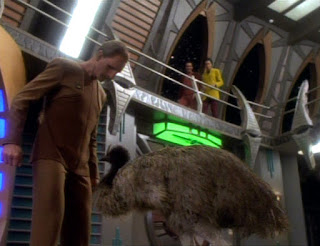 The interpretation here seems obvious. So obvious, in fact, it almost feels hard to accept.

Stories have power. That much we have established: “What war hasn't been a war of fiction?” as Alan Moore would say. Our ideas of how the world is are cultivated in the stories we tell about them and guide our actions in a myriad of ways, from the material psychology of the copycat effect to the more intangible power of symbols and synchromysticism. And so it's no great stretch to see, in “If Wishes Were Horses”, our stories take on a very real life of themselves derived from the meaning we imbue them with. One way to look at it is to argue that all our knowledge of the world is in some sense a kind of story-A representative facsimile meant to stand in for experiential perception. Our conscious understanding of others in necessarily incomplete, based as it must be on what we see, what we are allowed to see and how we interpret what we see. Fantasies are narratives we outline ourselves deliberately built out of distortions and exaggerations. 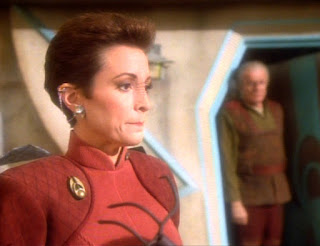 One of the telltale omens of the looming Long 1990s is a desire to see stories where heroes fail, lose or make bad decisions. I've spent a good amount of time, space and energy looking at the psychology of this, which is curious considering I haven't actually begun looking at the Long 1990s yet (although there is the argument that the groundwork has already been laid by numerous sociocultural factors and a handful of influential works).

This desire to voyeuristically engage with failure is not a guiding principle of Star Trek: Deep Space Nine. Although future Star Trek creative teams will most assuredly take this as gospel, most of the touted “conflict” of this particular series was designed to hinge around the natural tension that organically emerges when you take a lot of different people from a lot of different backgrounds and make them live and work in close proximity with one another. You can actually see a number of good examples of the show's approach to this throughout the various subplots in “Progress”: The B-plot is the obvious one, where Nog tries to teach Jake some basic Ferengi ...

“What war hasn't been a war of fiction?”: The Storyteller 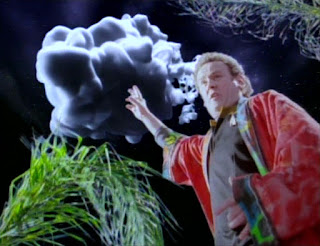 One of the big advantages Star Trek: Deep Space Nine has, regardless of whether or not Star Trek fans think it's actually an advantage or not, is, as we have established, its stationary location. But this asset doesn't just apply to the titular space station, it also applies to the nearby planet: After all, the whole point of setting this show so close to Bajor in the first place was to allow for development of one specific planetary society above and beyond what just having a representative as part of our crew would facilitate.

The biggest problem Star Trek has from an ethical anthropological standpoint is its well-known predilection to fall into the “planet of hats” issue. In less netspeak terms, this means Star Trek has an annoying tendency to depict extraterrestrial civilizations as monocultures in service to metaphor and allegory. Star Trek isn't the only sci-fi-fantasy work to have this problem (in fact I'd argue it's effectively endemic to the genre) and I don't even think it's anywhere near the worst perpetrator of it, but it is a problem Star Trek is famous for ... 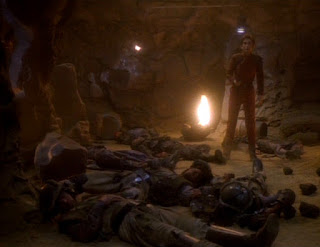 I tend to go back and forth on “Battle Lines”. I think it's because, on paper, it sounds like an almost paint-by-numbers Star Trek story reminiscent of nothing so much as Original Series episodes like “A Taste of Armageddon”, “Day of the Dove” and their ilk (and indeed, “Day of the Dove” was a primary inspiration for “Battle Lines”). As such, what usually tends to happen is I watch the episode, like it a whole lot, then go a long while without seeing it, forget how much I like it and think “oh, it musn't be that good. It's basically an Original Series episode and I hate it when Star Trek: Deep Space Nine just chases the Original Series”. Then I watch it again and love it.

Writing this essay should finally break that cycle for me, because “Battle Lines” is most assuredly excellent.

Bear in mind I adored “Battle Lines” at the time, and that probably says something. I especially loved the gritty iconography of these ageless, immortal soldiers constantly slaughtering each other in a bombed out desert cave on a godforsaken moon somewhere with Major Kira and ...