“Worlds in time”: Past Prologue 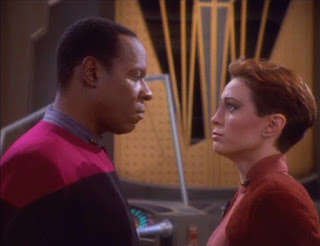 To elaborate a bit on some of the discussion in the last chapter, a big thing that underwrites the difference between “A Man Alone” and “Aquiel” from a narrative procedural standpoint is the differing, though complimentary, central focus of their parent series. In the context of those episodes, I phrased the difference between Star Trek: The Next Generation and Star Trek: Deep Space Nine as being primarily one of scale-The former works best when it's seen as a counterintuitively intimate show about a close-knit family team of voyagers, while the latter gives us a community-sized look at an entire urban geopolitical region extrapolated to a science fiction setting with interweaving stories about several different families set against a large-scale cast of characters.

But there's one other major distinguishing characteristic of Star Trek: Deep Space Nine's approach, and it's one “Past Prologue” is the key episode in setting in motion. Namely, although it's every bit as utopian as Star Trek: The Next Generation, it examines this utopianism from a different angle: Whereas the Enterprise is a utopian setting by default, even down to the fact “Encounter at Farpoint ... 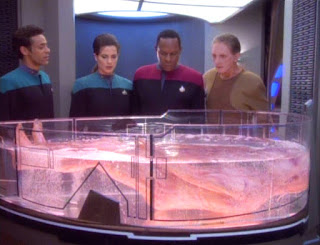 Of course Jadzia Dax would spend her free time meditating. With a video game, no less. Technological media does not supplant spiritual experience (except when appropriated by hegemonic forces of social control), but it can offer a glimpse of it, or at least a simulacrum of it. We can't spend every waking hour in an altered state of consciousness, so art exists that we might not lose sight of what's real.

Star Trek: Deep Space Nine is in the position of justifying its existence. With its pilot, the show has decisively seized the zeitgeist, but it still needs to let us know the sorts of things it's going to do and how it's going to operate on a week-to-week basis. What we see in “A Man Alone” is already very compelling, however: The plot is a simple sci-fi murder mystery the likes of which even Dirty Pair on an off day can do, but even that is an important indication of one of the things that sets this show apart from its sister. Star Trek: The Next Generation is ideally a show about voyaging and exploration-The Enterprise ... 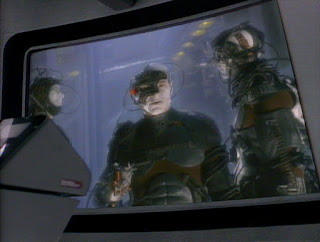 It's Stardate 4399.7 at the Battle of Wolf 359. Star Trek: The Next Generation fans exist here. This is a moment of grotesque apotheosis: The moment when you finally realise you're truly not alone in the universe. The Borg: Unfettered efficiency and misanthropy. Proof by negative. I refuse to believe. Behold and confront the negation of reality to reveal the true natures of reality. This is a path. You must decide for yourself if it is a good one for you. 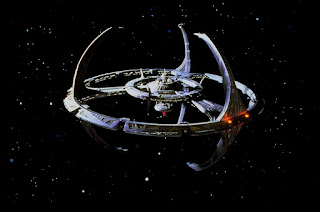 It's January 3, 1993 on your television screen. Star Trek: Deep Space Nine exists in this moment. But it has always existed at this point of singularity. It has waited. It waits. I'm skeptical, though cautiously optimistic about a second Star Trek series. I don't like that it's on a space station, because I dream about travelling to the stars. “This isn't a starship, Major”. I fear a new show will make people stop paying attention to and caring about the Enterprise crew. My crew; my family. Living in ...