“We just get a fragment of a hint”: Future Imperfect 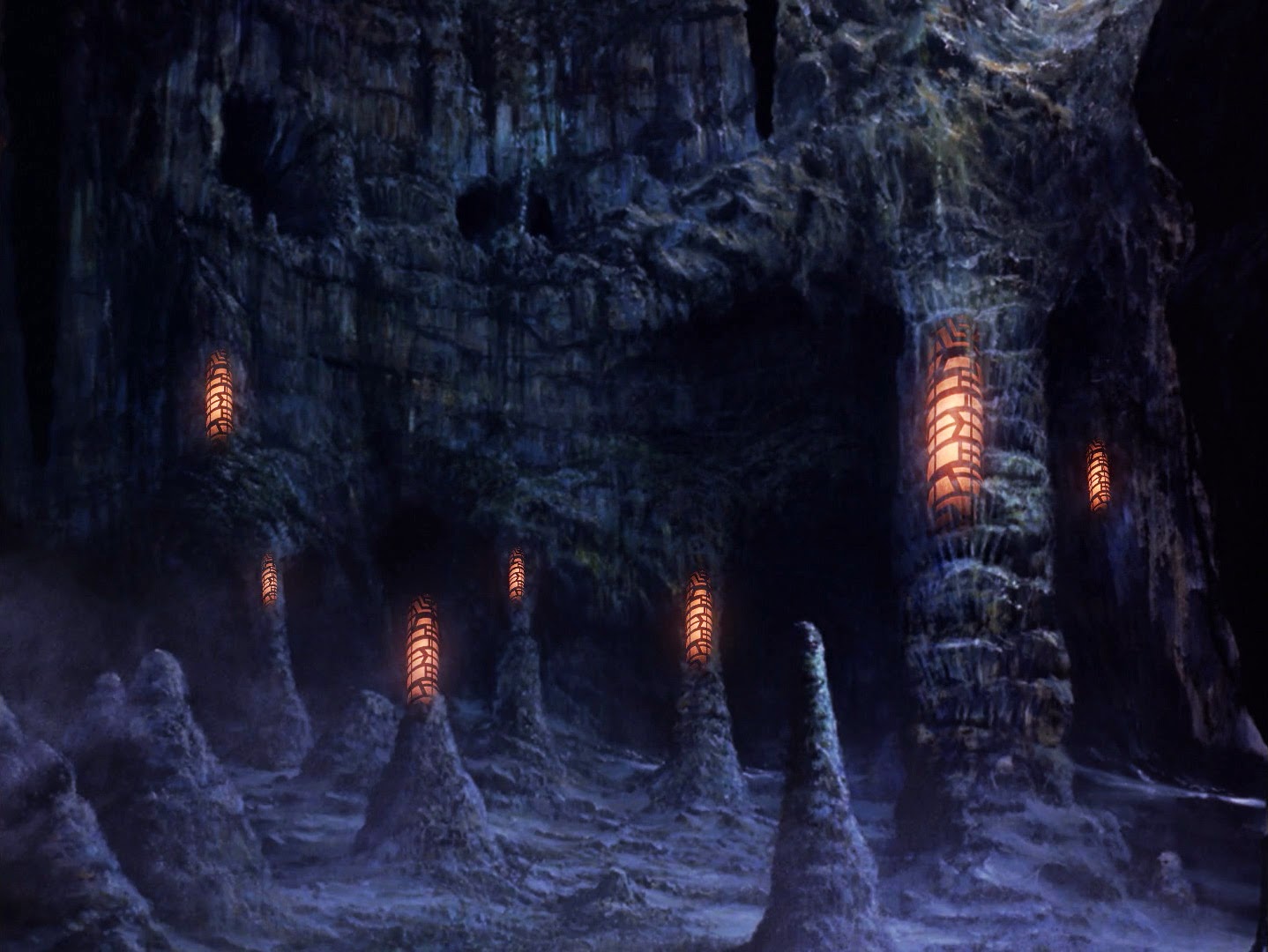 This is the archetypal example of the problem I'm having with the fourth season. “Future Imperfect” is a perfectly straightforward and even enjoyable hour of television, but it doesn't leave me with a whole lot of room to craft a creative and entertaining critical analysis of it. I mean, pretty much everything that can be said about it is pretty obvious to anyone watching it.

I actually remember “Future Imperfect” quite well. I did tend to mix it up with “Parallels” a lot, which I like better than this episode, but “Future Imperfect” still sticks with me. The caves on the planet where Commander Riker spends the episode in particular, as well as Barash's design, reminiscent as it is of the stereotypical Grey aliens from abduction reports while also being endearingly cute and childlike at the same time. I guess if you're going to do an abduction, missing time and false memories story in a Star Trek: The Next Generation setting, that's the kind of character you'd naturally want to create for it. The illusory Enterprise stuff is obviously pretty fun in a sort of “lets ... 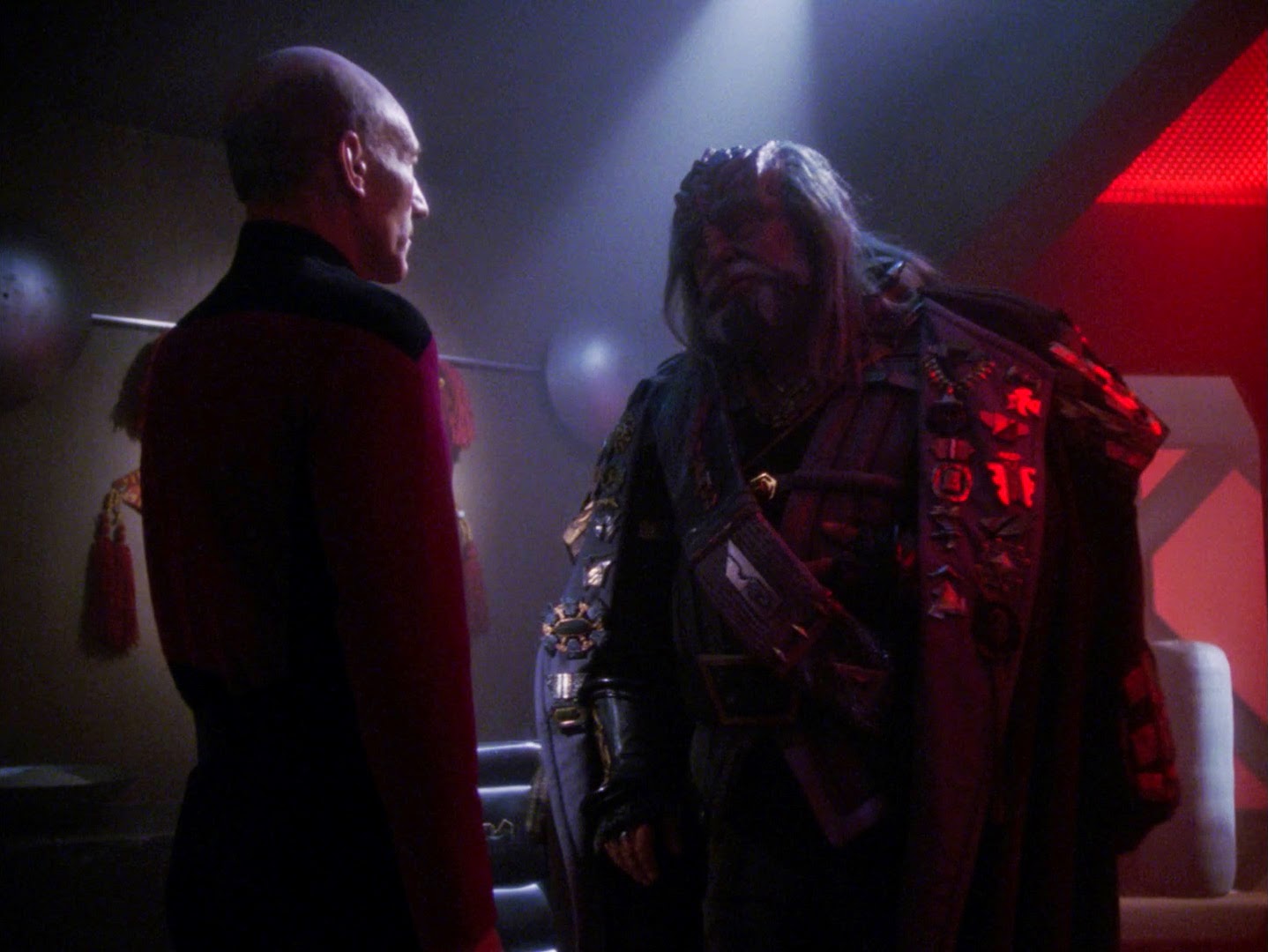 No. Unforgivable. Fuck this and everything about it.

Yes, you're all in luck today. Been awhile since I've done a proper polemic on this blog, but here we are: “Reunion” is simply godawful. This one deserves to stand with “The Naked Now” and “Code of Honor” among the series' absolute lowest lows. This episode is pretty much everything I hate about scripted drama in general and Star Trek in particular all neatly wrapped up in a gift bundle.

Unless this is literally the first thing of mine you've ever read (in which case, hi! And sorry you had to come in on such a crap episode! Please go read something I enjoyed writing about instead!) you know why I hate “Reunion” as much as I do. What happens to K'Ehleyr is a textbook example of fridging: Randomly and unceremoniously killing off a female character solely to give her male significant other something to lament about. With no agency of her own, she's treated as a disposable satellite of a male character's dour, angst-ridden narrative existence. It's a flagrantly sexist (and in this case, borderline misogynistic ... 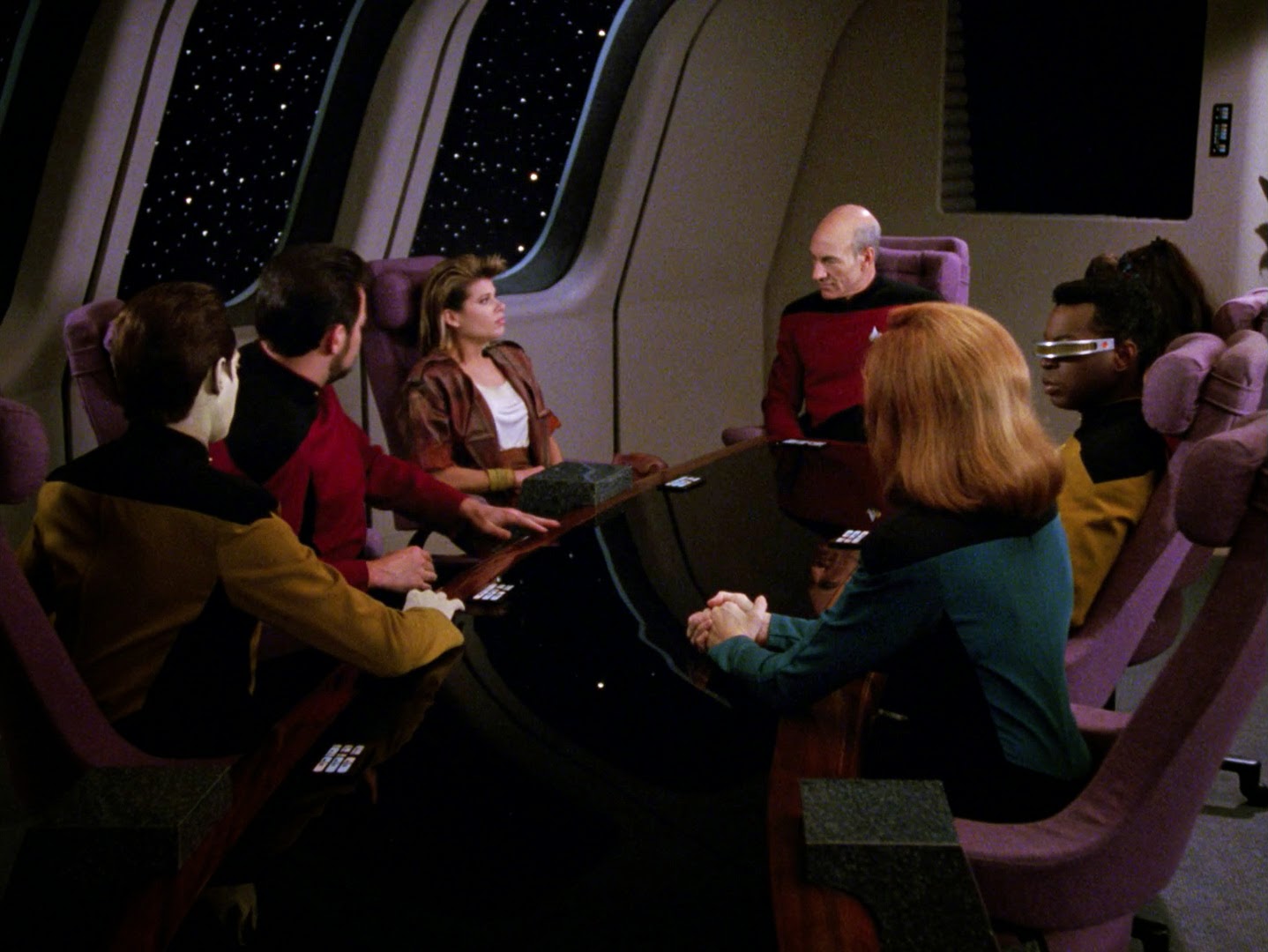 You would think the moment where Star Trek: The Next Generation finally outlasts Star Trek would be a special occasion and cause for celebration. And yet “Legacy”, a morose, funereal affair that follows on thematically from “Remember Me” in taking a long, hard look at feelings of loss and the contemplation of that which we've left behind, is anything but. Surprisingly for a show that was supposedly more popular than it had ever been before, Star Trek: The Next Generation, for the first time, seems to feel apathetic, directionless and depressive.

Whose legacy are we looking at here? Is it Star Trek's? Apart from a requisite and hyper-obscure in-joke in the teaser about Camus II and archaeology, there's nothing really about the Original Series here. Is it Star Trek: The Next Generation's? Isn't that a little premature?

There is someone on everyone's mind tonight. Of course, that person is Tasha Yar. Her absence weighs heavily both diegetically and extradiegetically: Star Trek: The Next Generation's long, dark season of discontent and introspection has finally forced it to come to terms with its biggest and greatest failure ...

“I'll never forget you”: Remember Me 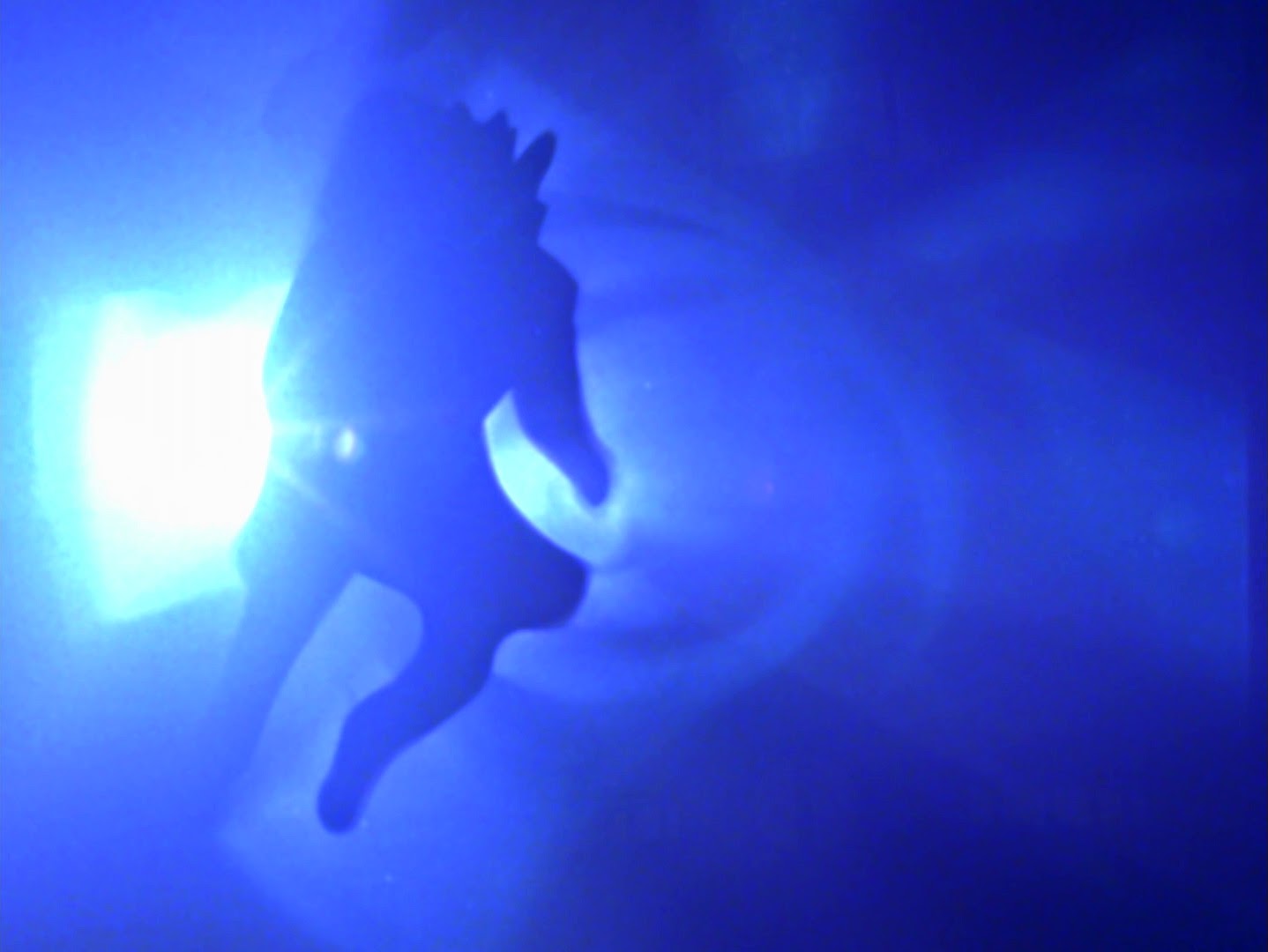 As is is befitting a show contemplating loss and nostalgic regret, “Remember Me” plays quite knowingly and powerfully over our own memories of that which we have left behind. In our case, memories of Star Trek: The Next Generation's first season: A year that, while comparatively speaking not all that distant from us all things considered, given recent events feels like a whole lifetime away.

Most obviously, of course, this manifests in The Traveller returning to play a pivotal role in the episode's resolution, bringing with him all the provocative concepts of thought-form magick, reminding us there was once a time when Star Trek: The Next Generation would not be so quick to run away from such things. But it's not just “Where No One Has Gone Before” that is invoked, but also “11001001”, though the re-use of most of that episode's iconic effects shots, most notably the Enterprise approaching and mooring inside Spacedock. It's bittersweet that these, two of the most vividly iconic, haunting and defining visual landscapes of Star Trek: The Next Generation's inaugural year, would be the ones to be revisited now. I ...

Previously on The Brent Spiner Show...

Well, that's the obvious reading, is it not? “Brothers” is the limit case for Brent Spiner's incredible versatility as an actor, playing three completely different characters all of whom interact with each other during the same scenes. And there's no two ways around it, Spiner is simply masterful, effortlessly shifting between Data, Lore and the surprisingly alive (temporarily) Doctor Noonian Soong. It's the latter of those roles that's worth speaking the most of here, as it provides the first genuine challenge Star Trek: The Next Generation has thrown at Spiner since he joined the show. It's not that Spiner's talents were ever not self-evident: He's great as Data, obviously, and the way he works his penchant for impersonations into the android's inherent mutability and impressionable nature is a stroke of genius. And his love of playing unreconstructed psychopaths is on record, as is his profoundly chilling skill at it: That's pretty much who Lore is here again, and there's another episode coming up next year that gives Spiner even more room to play in this ... 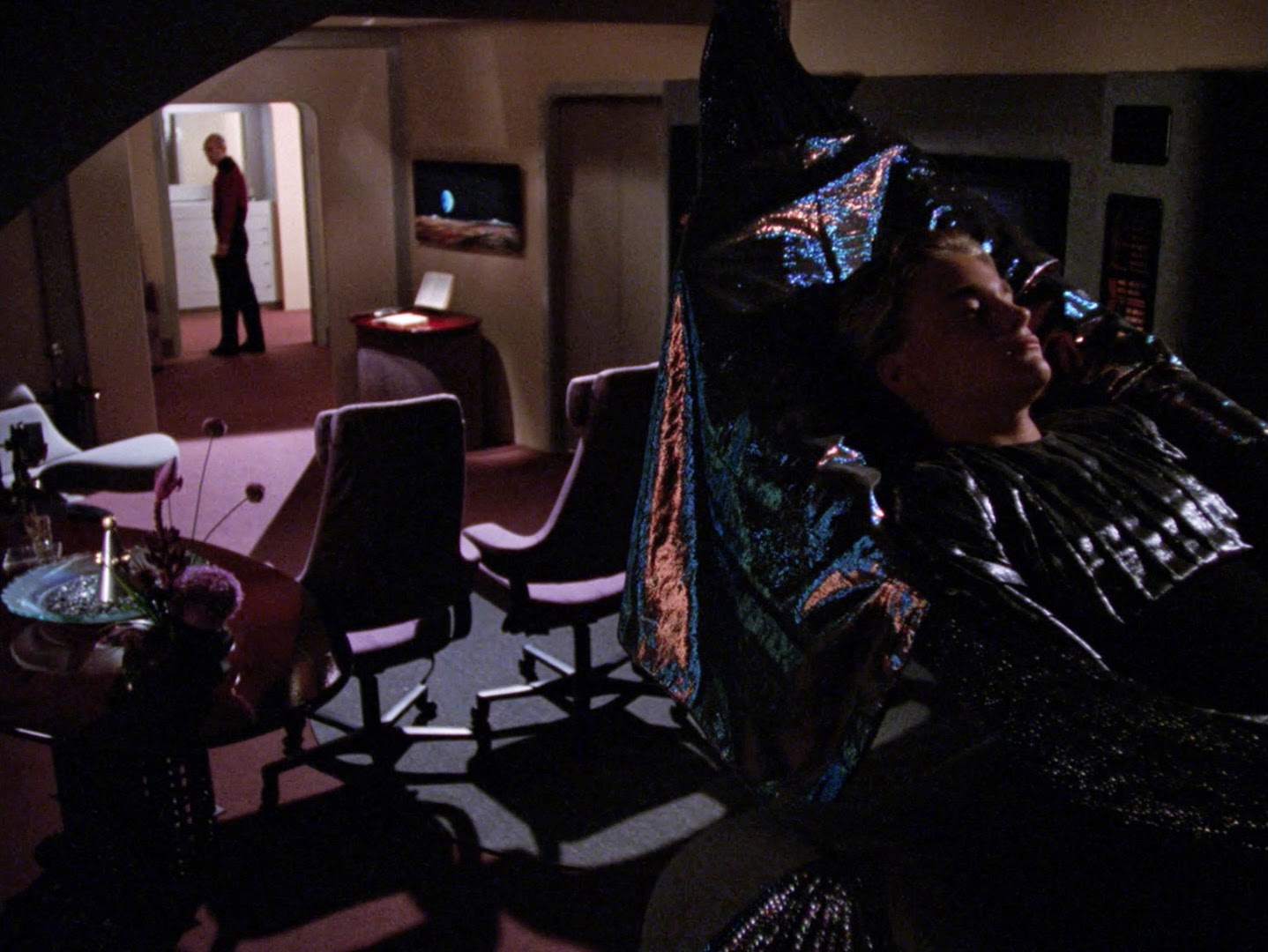 The fourth season sees the comparatively swift assembly of the team that will be the primary creative figures in Star Trek for the next four years, and in a few cases, even longer. Michael Piller, Ronald D. Moore and René Echevarria are the only survivors from the chaos of the third season, with Rick Berman maintaining the day-to-day duties he's had since the show began, as essentially an intermediary between the writing staff and Paramount Corporate. Brannon Braga is the first new addition, coming on as a staff intern over the summer. Later in the year they'll be joined by Naren Shankar, whose work we'll be seeing more of when we get to season five and beyond.

The biggest and most important new face of the year, however, we get to meet now. Jeri Taylor, who will go on to be co-executive producer of Star Trek: The Next Generation and co-creator of Star Trek Voyager, joins the team with this episode at the recommendation of outgoing producer Lee Sheldon (the Michael Wagner of the fourth season). Taylor herself freely admits she knew absolutely nothing about Star Trek before she ...

“Bad Future”: The Best of Both Worlds, Part II, Family 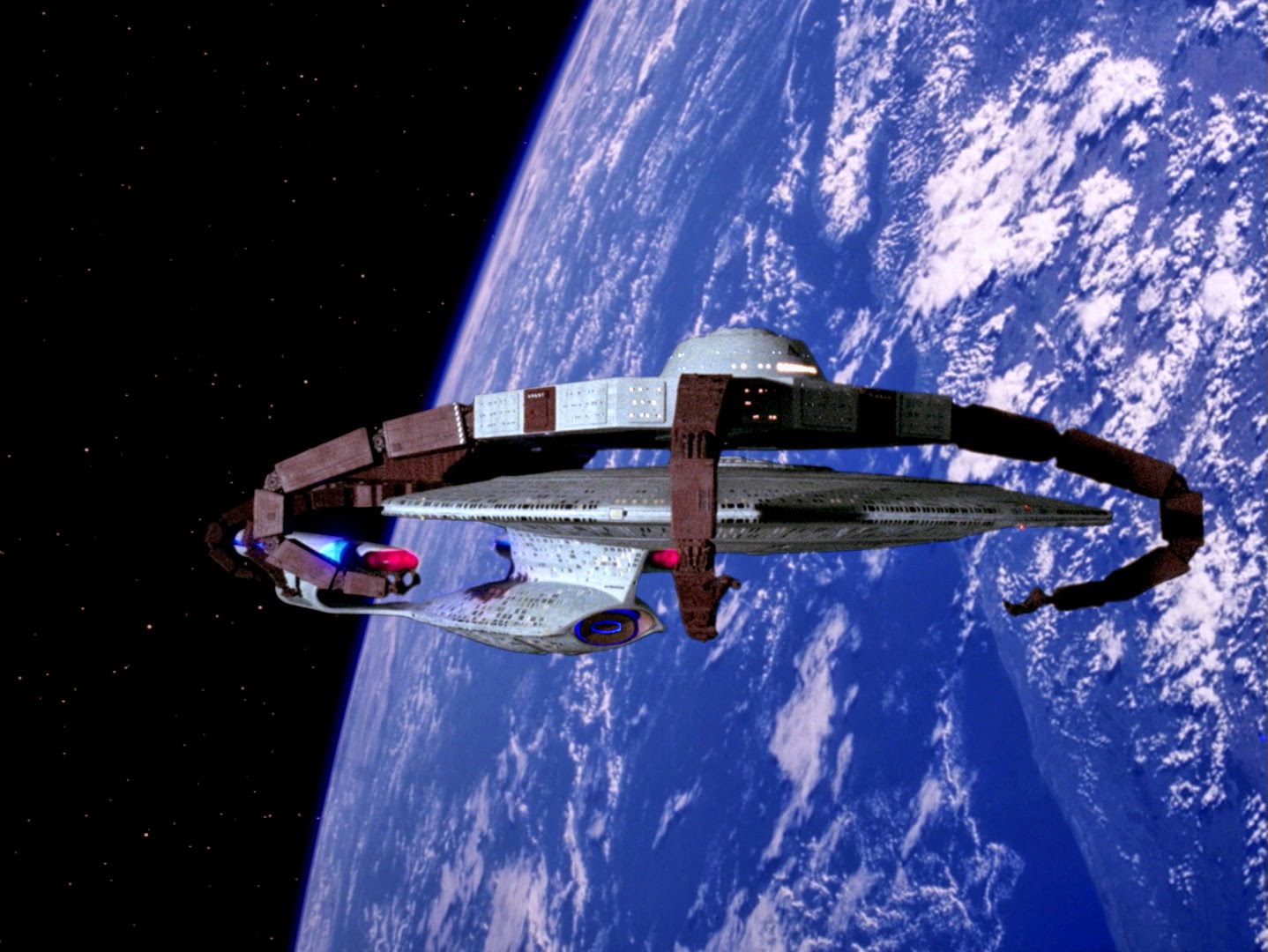 Previously on Star Trek: The Next Generation...


“This is the real reason the Borg are here and, more to the point, why the Borg win. What they impose on the show, what all of 'The Best of Both Worlds' does, is narrative collapse. Defined as a combined diegetic and extradiegetic threat to the continuation of a specific structure such that the risk no further stories within it can ever be told becomes frighteningly real, narrative collapse manifests itself when the narrative internalizes its own unsustainability, and can only be averted through a blood sacrifice. And this is precisely what's happened to Star Trek: The Next Generation, because, even by its admittedly rocky pre-existing standards, this season has simply gone too far. The show's infuriatingly constant failure to follow its own example and live up to its potential has become pathological, and it's now even found itself staffed by people who not only don't understand it, but openly hate it and actively work towards the detriment and dissolution of its ideals. The Borg see this ...

“These pages present a case of literary parasitism.” Devil's Due

The First Part of the Tragedy

Out in unexplored space, the Enterprise comes upon a class M planet heretofore unknown to the Federation. Taking a landing party down, Kirk learns the planet is called Naterra, and is invited by the locals to meet their beloved ruler, an elderly and highly agitated man by the name of Zxolar the Blessed. However, he is met by evasion and confrontation, as Zxolar keeps going on about the end of the world and someone named Komether and continually insisting the “contract is not yet up”. After he realises Kirk and his party have no idea what he's talking about, Zxolar explains that Naterra is about to be destroyed and begs Kirk to help, but Kirk recites the Prime Directive at him. Soon though, Zxolar collapses and an energy form appears in the room, causing McCoy to disappear. After Kirk and Xon beam up to the Enterprise with Zxolar and call for search parties to locate McCoy, the energy form reappears in sickbay and attacks Chapel.

Eventually, it is revealed that the energy being is the aforementioned Komether, who was summoned one night many years ago by Zxolar and his five philosopher colleagues, who ...