“We are only us when we are here”: The Alternate 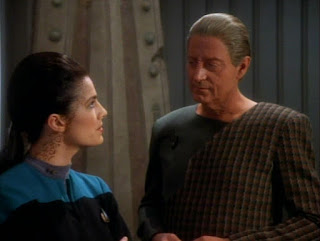 “The Alternate” is a study of Odo's past. There is a clever fake-out during the first few acts, with the tease of an archaeological site in the Gamma Quadrant yielding clues about Odo's people, and which actually doesn't amount to much aside from the plot device needed to get the episode's central...conflict in motion. Because while “The Alternate” is about Odo's backstory, it's not stupid enough to explain away an origin story for him outright, or even give too many hints that would tempt the audience to get distracted trying to solve a mystery instead of paying attention to the story. Rather, the past we learn about Odo is his relationship with Doctor Mora Pol, who becomes the Bajoran scientist who found and raised him Odo mentioned to Lwaxana Troi in “The Forsaken”.

As much as I enjoy the fake-out science fiction mystery worldbuilding that baits us away so we don't notice the naturally more important exploration of characters an their relationship with one another until we're already in it, something about this plot has never sat entirely well with me. Odo is written here as a bit of a prodigal son, a headstrong and wayward child who becomes estranged from his father because of his determination to chart his own course in life (it should be noted that this doesn't really connect back to the Biblical parable of the prodigal son, but it's become a common enough archetype I feel comfortable citing it. Star Trek itself uses it in this context some years down the road). This strikes me as ever-so-slightly a cliché, although it's an unfortunately frequent enough occurrence in family dynamics that it's not entirely so.

The larger issue this strays into is that by pushing Odo's story in this direction (down to the whole “throwing a temper tantrum by turning into a monster” bit), Star Trek: Deep Space Nine risks trespassing into children's literature territory, as it sometimes tends to do from time to time when handling this sort of material. I know I've described Star Trek during this era as being “children's television for adults”, but the crucial variable in that statement is *for adults*. I'm not entirely sure a prodigal son narrative about making up with your dad entirely qualifies. For some reason this doesn't strike me as quite as mature a handling of this kind of familial dynamic as, well, Lwaxana and Deanna Troi, for instance (especially after “Dark Page”). But besides, in “The Forsaken” Odo seems to describe his history with the character who would become Doctor Mora as frightening, being treated as an inanimate object of curiosity rather than a person. And that doesn't quite always come across through James Sloyan's powerful and sympathetic performance.

Another issue I have with this episode is Jadzia, namely that she spends a fair portion of it knocked unconscious. I sort of thought we were passed the point where writers would keep Dax bedridden or otherwise incapacitated for all of part of an episode because they didn't know what to do with her, or otherwise treat her as anything other than one of the most capable and competent members of the crew (if not the most capable and competent outright). Then there's the matter of the Dax/Bashir thing, which I likewise thought we had left behind last season. Part of the reason Melora Pazlar was introduced as a potential reoccurring character (not to mention Garak, but we'll deal with him another day) was to give Julian somewhat less of a single-target sexuality. Sure, I prefer to read him as a queer poly guy, but I'm not about to pretend anyone on the writing staff or any of the freelancers saw him that way. This a bit more of a push back towards putting Dax and Bashir on the path towards becoming the Official Couple in this episode, which I think is an obscenely dangerous move (partly because it would take the form of an appallingly patriarchal narrative wherein Dax “finally gives in” and Bashir “wins” her through a combination of persistence and growing up), and one the show has been actually pretty good about avoiding up to this point.

(That said, there is a nice moment here where Doctor Mora opens up to Jadzia, which reinforces her status as the best empath and listener aboard the station.)

In more fertile grounds, this is also the first appearance of the heretofore unexplored Dax/Odo pairing, a really fascinating dynamic that will get a lot more exposure and exploration later on in the season in “Shadowplay”. And, just like that episode, “The Alternate”, or at least the first part of it, is another example of the “wide-open outdoor spaces awash in summer sunshine” aesthetic I love and associate so much with this season. Dax/Odo is a pairing (non-romantic, I should stress) I'm interested in for many reasons. First of all, the contrast between these two characters is remarkable-Jadzia Dax is vibrant, outgoing; full of life and life energy. Odo is taciturn, private and orderly. Jadzia is the drive to create and beget life, while Odo is practically the definition of asexual and aromantic. But as different as they seem at first glance, they actually share a great deal in common. Dax and Odo both reject and transcend the stereotypical conception of identity: Dax is, of course, a joined being who is a living reconciliation of two seemingly contradictory identities. All genders at once, she chooses to present as a woman, albeit something of a bent drag quotation of a woman. Odo, however, I would argue is genderless. Sure, he presents as male, but are we ever actually given any indication that's how he identifies? Can we even say Odo is a gendered being, given he can be anything?

Our gods can appear to us in any number of forms.

This leads us into another possible way to read the undercurrents in this story. Writer Jim Trombetta says the pitch that became this episode came about through his pondering the question of what it would be like for a shapeshifter to “suffer from multiple personality disorder”. Here I feel there is fruit for an interesting discussion. Not so much the pathological lens for studying identity, but the concept of malleability of form and identity in general. Odo is, by nature, formless: He can, presumably, assume any shape or identity necessary to adapt to any given situation. Even the face and persona he wears to us most of the time is fairly conspicuously just another kind of mask to fit in with us a little better. It's one specific manifestation of a certain combination of facets of Odo's broader and more holistic self, which is theoretically infinite. How many masks do we wear or how many identities do we assume in our own day-to-day lives? More to the point, perhaps consider this as a positive rather than the implicit negative Star Trek: Deep Space Nine might have you read this as...We all carry within ourselves a multitude of beings, identities and higher selves we turn to when the moment calls for it. Far from being lacking in self, Odo instead rejects the ego.

I really did like the malleability of Odo that was touched on here. I didn't really enjoy the presentation of him as the lost prodigal son either as for me it got in the way of exploring what is interesting about Odo.