Rushing to pack and just had a bunch of things blow up in my face in a frustrating and time consuming manner, so I really have no time to generate extra content for this week.

Accordingly, here's a Frank Miller-drawn cover to Marvel Premiere in the period where they were reprinting the early Doctor Who Weekly strips. This contained parts 5-8 of The Iron Legion and a Steve Moore backup strip, and came out in November of 1980, the same week as the second part of Days of Future Past and the first part of State of Decay, and a week before the first appearance of Abelard Snazz in 2000 AD. 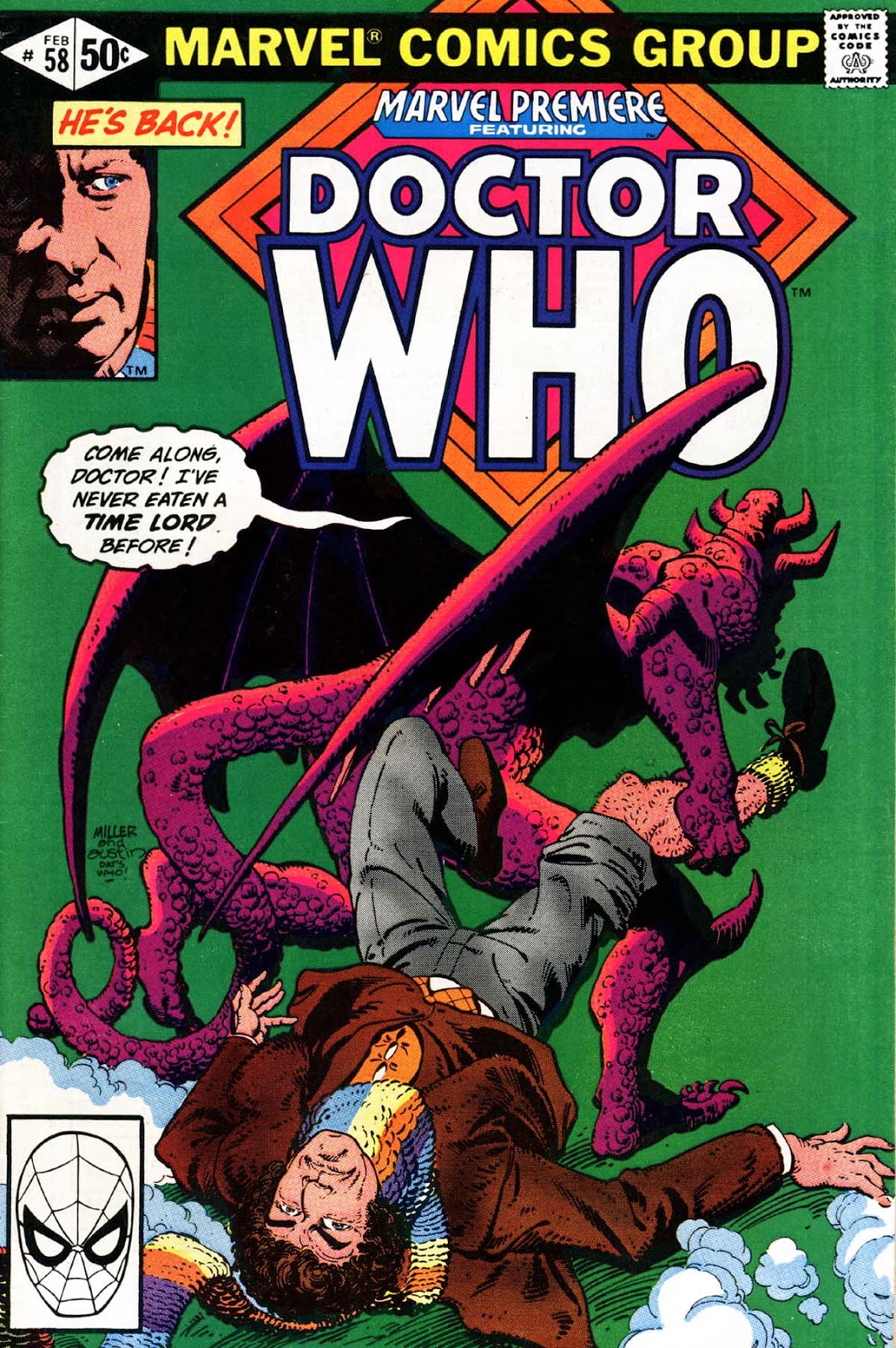 The Doctor has one trouser leg rolled up and is making a secret Masonic sign with his left hand. He is upside down in a clear allusion to the Hanged Man card of the major Arcana. The demon is double horned and the predominant colours are green and purple which signify...I'm struggling here. Anyone?...jane?

On a more mundane level I love the signature 'MILLER and Austin DAT' S WHO!' And the old school Spidey bar code.

Wait...in the top left ident box the Doctor is portrayed as one eyed and half in shadow; a reference to Odin? Also the words 'He's back!' Suggesting a resurrection myth.

Sweet Castaborous, Doctor; you can master the intersections of time and space but you can't handle a wee bit of manscaping on your calves? You know that demon means business because he isn't complaining about the intolerable prickling.

Those are some well hairy legs!

Seriously hairy.
I'm just trying to work out what Clara's disguised as.

Purple and green (and especially a purplish green or a greenish purple) are the colors of magic.

...wow. My only direct exposure to Frank Miller's comics (as opposed to film adaptations) is Linkara's reviews of his later work. So... there really was a point at which he could actually sort of draw? That's not just one of those "back in my day" myths?

She's the red spot on the right hand.

The diamond on his forehead suggests the mystical third eye. Also the double chin indicates too many jelly babies. The unusual TM emblem replacing the usual question-mark lapel could stand for "totes magical"

No, no... CLEARLY she's the comics code authority!

Printed on newsprint. I grabbed a later reprint that was larger sized and on better paper, only to find that it used the same color separations. Looked garish. Worse, it senselessly edited some of the dialogue.

Late on, Marvel did have a better-quality reprint series. Unfortunately, it continued from these four issues and started with "Star Beast" instead of starting over.

So, for me, the reprints were the best part of the IDW license.

And of course the Joker!

Frank Miller clearly comes from the same alternate universe as the guy who designed the Dapol action figures. Not pictured: the TARDIS's pentagonal console.

Purple and Green have been the official colours of Evil in comic books for... 40 years now? 50?

As someone on my facebook pointed out when this turned up a few days back, between the eyebrows and the leg, that's possibly the maximum amount of hairy you'll ever see on a Tom Baker. The artist has spend an inordinately long time lovingly crafting each hair on that leg.