Years of Future Past #1

A very capable homage to a classic motif in X-Men stories, rejigged in terms of Secret Wars. That said, I'm not even reading a ton of these alternate realities Secret Wars books and they're starting to all feel a bit alike to me; I can't imagine how they're reading to people with larger pulls than me.

The settling into something more standard issue is probably inevitable, and the collection of saved heroes is a novel one. I expect this will remain satisfying, but there's very much a return to ground here after the giddy highs of the kickoff, and the news that #4 has been pushed back to July is worrisome; part of why this is working, frankly, is the high pace of release. I'm not sure I'm still going to give a shit come November, especially with all these auxiliary books.

Zombies vs. Megafauna. Possibly not a comedy. It's sometimes hard to tell with Gillen. We're in the mid-story lull here, with neither plot having much conceptual oomph, but it's capable zombies, prehistoric and otherwise.

At the book's heart is a scene Gillen basically promised in the initial interviews about the book. Gillen's take on it is very strong, and it successfully sets up a new status quo for the book. Good, solid fun.

Some solid but not particularly noteworthy jokes about hippos give way to a Welcome to Night Vale-esque separation of narrator and story, followed by smashed cars. Yes, that is a summary. Yes, it also counts as a review.

Perhaps just because its concept is an active turn away from the past few years of Spider-Man, but this worked in a way that not all of the Secret Wars minis have. The flash-forward is very well done, setting a new status quo that is at once unlike anything we've seen before and an archetypal Spider-Man setup. This is very promising.

There's plenty of world in which to enthuse and speculate over the consequences and implications of this issue, including comments here. I have numerous theories and guesses. Those, however, are not the point of a review.

As a comic, as a piece of art and an engagement with culture, as an installment in the serial The Wicked and the Divine, this is superlative. It is one of the best comics of the year, guaranteed. I've praised this comic plenty of times as one to watch. The thrill those of us who have been following it got this week, opening our issue, more than justifies that recommendation. Simply, utterly, perfectly brilliant. Indeed, so good it deserves a reaction image. 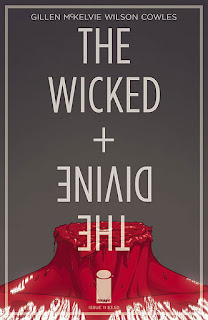 [W&D DISCUSSION] Okay, so while this comes as a shock to all of us, presumably all (or at least, most) of the main gods we've seen at length where in on this, right? This is the answer to the initial mystery, why she was singled out by Amaterasu. Why Luci took her under her wing. Why the others, like Baal, continued to keep her around when she was supposedly just some random fad. This is it, right? To be led to the slaughter?

Now, where do we go from here? Inana is on the cover for #12, so presumably his death was a feint? But that doesn't seem quite right. Laura's narration continues after her demise, and in the past tense. My guess? There's an afterlife in play here. After all, we've seen that the gods don't really die, just go into a hibernation so to speak until they're called again. At this point I'm expecting we haven't seen the last of the deceased

Persephone has to go to the underworld six months of the year. We're getting six months of flashbacks by fill-in artists as the main team does Phonogram. To me, that's so obvious I'm sure it's wrong.

Warning: the back cover is a serious spoiler if you've been paying attention.

Spider-man: Renew Your Vows simply didn't work for me. Maybe it's because I'm a father to a young child, but the moment Venom was announced as villain, the story became utterly predictable.

I really wish I liked Wic+Div, but much as I admire it, and even read scenes within it that mirror my own experiences, I find it impossible to get emotionally involved with it. Which is a shame. Maybe it's too close? It's definitely the sort of comic I'd have attempted back when I was trying to break into comics.

Meanwhile, the funniest comic on sale this week (and, much to my surprise, my favourite) was Robinson and Hinckle's Airboy. Think Fellini and Charles Kaufman collaborating on an adaption of Fear and Loathing In Las Vegas centred around a goofy 1940's superhero. I was laughing out loud by the time they got to sniffing horse tranquilliser. In many ways, it's the comic I expected Happy to be.

Surely Robinson should be a footnote in The Last War in Albion?

I feel like "Star Wars" jumped the shark last week with #5, with a really unnecessary scene where an innocent character gets tortured to death that ends up making a morally ambiguous character into a horrific sadist, while also seeming to jump through a hoop to try to make it grim and gritty for the sake of it. #4 had me worried with Luke splitting the party for little reason, but I've now determined the writing team isn't quite sure what direction they want to take this title, and its kind of a mess. Dark Horse's "Star Wars" comic was much much better than this by issue #5 *sigh*.

Darth Vader continues to just excel as a title. Its really just fantastic.

Kanan is also pretty darn good, not on the same level as Vader, but its a well written well drawn story with good tension and action. Straightforward, sure, but its the second best Star Wars title right now.

Well...I can't say I was "surprised," as such, as I'd entertained the possibility this might happen in some form or another, but I most definitely had an "oh shit he's actually doing this" moment. I didn't remember enough of my Greek mythology to think of it, but I think Eric Gimlin's got it pegged. Now, the more important question: which pop star is Persephone meant to invoke? My guess is FKA Twigs, unless I'm missing some horribly obvious answer I'm just unaware of.

Another thing that occurs to me: All three of the dead pantheon members have strong associations with the underworld; and two of them are specifically associated with coming back out again. I'm wondering if they had to be killed so they could properly fulfill their roles.

Ananke is so obviously being painted as a villain at this point I strongly suspect misdirection. If it's NOT misdirection, I find myself wondering why the pantheon only gets two years; since they don't necessarily seem to die of natural causes when their time runs out. My crazy theory there is that the power drives them mad, and they end their time to protect the world- which means Ananke could be completely bonkers at this point, from having not left the field when she should have.

As you said, Phil, a superlative issue. That leaves us on a cliffhanger that's likely to last at least 6 months...

Although I definitely didn't see the main event coming, it was her parents that really shocked me. I don't see any way that they're coming back, and pretty much the last thing they saw was what Ananke had done to their daughter.
As for Inana, we were told that he'd be vulnerable whilst performing, but then he stopped performing, so maybe not as vulnerable as Baphomet hopes?