Faerie Tales (The Legend of Zelda: A Link to the Past) 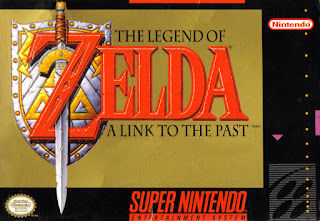 I have never beaten a final boss in any Zelda game and I always feel they change the tone of the game away from what I enjoy.

P.S. I like the new adverts - they take you to weird and wacky places.

This one, I never really got into, while Ocarina of Time is one of my all-time favourites.

This is a game I have never returned to, though I credit it with a number of linked epiphanies about all sorts of things. It's interesting, however, how different my existential epiphanies were than what you are describing here (at least on their surface) because this was a game I played in an almost exclusively social context, usually with my brother but occasionally with friends and adversaries, one of whom was so excited to show me something he drew a map on the back of social studies quiz. The Dark World was still creepy and "other," but looking into it together (and playing the amazing scene when Link ascends from he castle in a thunderstorm), my friends and I were mostly just stupefied by what humans were capable of making/dreaming/imagining. This doesn't mean my epiphany was a pleasant one. I was disturbed by the Dark World in a real way, partially because of the idea of a parallel universe beneath our own but mostly by the idea that there wasn't any. My real secret, the one that made me deeply sad, was that, at thirteen or however old I was, I desperately wanted to get into this world of constructed mythos where the scary underneath was also beautiful. I had mourned for the loss/non-existence of fictional worlds before (Robotech especially) but there was something especially sad about finally beating this game.

The Dapper Anarchist 4 years, 7 months ago

(thanks for mentioning the ads - I'd forgotten to disable adblocker here... Sorry Dr. Sandifer!)

Interesting. I can definitely see that with some of the games, but I feel like the last boss of Wind Waker in particular feels absolutely correct and natural for the game. (Also, I absolutely love that he fights like a more skilled version of the Gerudo warriors from Ocarina.)

This is my favorite Zelda game. I absolutely love it, have played it at least a dozen times, maybe as many as twenty. I'm not any *good* at it--I typically die somewhere around 80 times on a single playthrough--but I love it. Indeed, I would point to it as one of the four nigh-perfect SNES games. (The others are Yoshi's Island, Super Metroid, and Chronotrigger.)

"Rabbit hole" I see what you did there.

I hate the so-called official timeline for, as you put it, relegating this and the two previous games to a "dystopian backwater." I much prefer the notion of the Zelda games as, well, a legend, which is to say the same story told over and over again with variations appropriate to the time and place and manner of the telling. But if you must assemble them into a history, you can do it with only two timelines with no dystopian horror to explain:

1) The Hero of Time returns from his time travel adventures to a point *before* he drew the Master Sword, and chooses not to draw it. As a result, Ganondorf is unable to acquire the Triforce. Link leaves, Majora's Mask happens, Ganondorf tries to take over Hyrule while he's gone and is sent into the Twilight Realm, eventually fights Link's reincarnation, Twilight Princess happens.

2) The Hero of Time, as an adult, defeats Ganondorf, before being sent back home to timeline 1. As a result, he doesn't exist when Ganondorf returns, and the gods flood Hyrule. Eventually someone who is almost but not quite a reincarnation of the Hero of Time emerges just in time to fight Ganondorf, and Wind Waker happens.

I leave slotting the rest of the series into the two timelines (or before the split) as an exercise for the reader.

The Dark World is an absolutely delicious concept, because it's simply the world of the true self. For most people that's a dreary and violent place, but for Link it's a fuzzy pink bunny incapable of hurting anyone or anything. Which says interesting things about the nature of Courage, since most of Link's adventures involve lots of hurting others. A major part of Courage, the game seems to be saying, is the will to act against one's own nature when necessary.

The comic adaptation of this game, which ran in Nintendo Power for a year, was excellent. Most notably, it introduced an idea which would be incorporated into some of the later games, namely that Zelda, not Link, should be the one to wield the Silver/Light Arrows, and the two need to fight Ganon together. Power requires both Wisdom and Courage to overcome.

Froborr: I haven't played Wind Waker :(
Dapper Anarchist: The new Ads are fun and a much better fit to the site.

I think this essay can only benefit from being read together with Owen Pallett's He Poos Clouds.

I'm unsettled by the possibility of being unable to complete the Skulltulla quest in Ocarina of Time, particularly because Nintendo's design philosophy has been, ever since Super Mario World, to aggressively avoid locking the player out of full completion even if it means breaking the world a little bit.

I was honestly delighted to find out Nintendo had retconned the pre-Ocarina games as the world where Ganon wins, because it tracked with my own private conception of the series: showing multiple realities of Hyrule, where Power, Courage or Wisdom are the dominant element, and with the gameplay styles of each game broadly mapping to one of the three virtues (the 3 NES and SNES games mapping cleanly to Power, Wind Waker mapping to Wisdom, and Twilight Princess to Courage). Sadly, you can't really make that work with the official history without the worst kind of fan retconning.

For me, the three Zelda games that are the best are the original Legend of Zelda, Legend of Zelda: A Link to the Past, and Legend of Zelda: Link's Awakening. They may be from a dystopic timeline, in which there is no hope of civilized progress without massive civilization loss--but so are we.