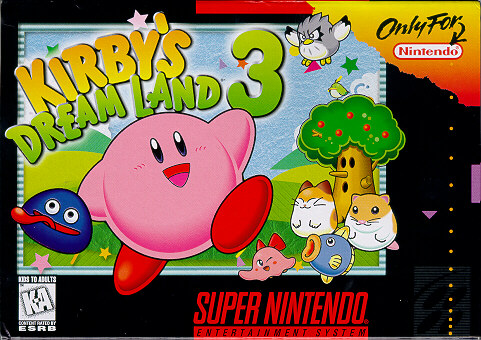 Moore, drawing from Bunyan, calls it Mansoul. Blake goes with Eternity, while the Aboriginal Australians call it the Dreamtime. Kabbalistically it’s Yesod. It is the world in which the implications of things are made real, their secret histories and imagined futures stretching into the horizon, ghosts and possibilities not haunting them so much as simply inhabiting them, the ordinary and everyday population of the vast and surreal psychic metropolis. When your children asked you where Mario goes when he’s out of lives, this is what you were afraid to tell them.

The peripatetic pink puffball before us may seem a strange psychopomp, but he’s got prior form, with his sole NES game also post-dating that console’s obsolescence. At least in his early days, this was simply what he did, the Nintendo character who appeared at the end of a console’s life to usher it into this glittering and sunken realm of lost nostalgia. And in a sense he’s the perfect guide to this shimmering realm; he is literally a consumer, eating the dream-creatures around him and taking on their essence and nature. This is, after all, how the mass culture of video games works. For years, it’s what we did. Now here, at the end of everything, he repeats the service.

Ignore the slight twinge of absurdity. That’s simply the state of things, a point John Higgs slyly makes when he uses Super Mario Bros. as his frame with which to explain the famously thorny question of “what’s postmodernism” during his astonishing history of the 20th century Stranger Than We Can Imagine. There is a place you go after you die, and when you get there you are greated by Kirby. He is terrifying to behold, falling into an uncanny valley you didn’t quite realize existed. On the occasions you imagined a video game character physically manifesting before you (and don’t even try to pretend you haven’t done that) you imagined it as a sort of explicitly digital thing – harshly delineated squares hovering in space in front of you, two-dimensional projections into a three-dimensional world. That or Minecraft. Either way, it was 8-bit. You never imagined this.

It’s not the way he’s always facing you even if you try to circle around him. That’s unsettling, triggering a vague sense of motion sickness in your memory of a physical body, but you have a conceptual framework for it from Doom or 3-D movies or the parallax effect on your phone. That’s uncanny, but at least within the domain of what you could imagine. No, it’s the shadow. Inasmuch as you expected him, you expected him to be pink like a raw nerve, pink like a 1 and not a 0, absolute and platonic. But instead there’s a dappled splatter of tincts across his surface, a depth map cast by an imaginary light that clearly does not exist in the space you inhabit.

Still, you understand what you’re looking at even from the inadequate and low-res icon that it projects as its face. This is every Kirby. The perfect digital superposition of every single one that was ever conjured into being by the awful analog stuttering of an electric circuit. This is truth, every pixel an infinitely-faceted jewel reflecting the webs of culture and causality that spawned them, everyone who ever played this game and ever will and the entire secret history that brought them to the controller in every single second that they ever played, every single twitch of muscle and pulse of neuron involved in the act suspended here, perfect and holy and forever.

There’s nothing special about this, of course. Every game that anyone has ever played has its echo here. Yes, Kirby is apropos to the circumstances, but that’s just because of the circumstances. In other stories you die and meet Bubsy or Bad Mr. Frosty or Slippy Toad. But that doesn’t take away from the sacred nature of this. It doesn’t diminish it in the slightest. The fact that there are an infinitude of everythings does not make this any less than everything in and of itself.

He gestures, although it takes you a moment to recognize the stuttering chain of frames as movement and not a glitch. (Are there glitches in the afterlife? You suppose there must be, given how things seem to work.) You know what you’re going to see before you even turn around, the way you know things in dreams before they happen. And yet somehow it is still shocking to behold.

It’s huge. Kirby was roughly man-sized, which was never quite how you’d imagined it, but was a thing you could wrap your head around. But this towers over you, tall enough that you cannot take it all in at once. Its scale is made even more monstrous by its absoluteness – a single shade of stark white that occupies almost your entire field of vision, defaced only by a single blood-red iris at the center and oblivion-black pupil within that. You freeze instinctively, prey within its gaze, before you realize that it can’t see you. It can’t see anything at all.

The sigh of relief hasn’t even left your lungs when the greater horror strikes. An eye is just a camera, after all, and in this place a camera is

And then it strikes – the annihilating gaze. There is no escape. There is nothing at all. Just the cavernous blackness of forgetting. You can feel everything that you have ever loved or cared about, every idle afternoon and thrill of discovery, every secret memory and private association, all of it, everything you are, disappearing, slipping into the unbeing of a game turned off. It does not burn. You are not cold. You are nothing at all.

At first you do not even notice the fight commencing. In some sense you never do. You understand implicitly that the two sprites bouncing around in front of you are not really the battle, but merely a symbol of it – what happens when a battle between fundamental forces of creation is reduced to something that can be displayed on a CRT screen. But first there is only the gradual and barely perceptible resumption of being – a slow recollection of self followed by the awareness that the thing that had been unmaking you has had its attention turned elsewhere, is now locked in an elaborate aerial combat with the very soul of life and creation as embodied by a pink sphere with a magic wand. There’s a sinking feeling as you dimly recall it being called the Love-Love Stick. Oh Jesus, we’re all doomed, aren’t we?

Of course not. What could this place possibly be, at the end of the day, but the times when we played with grace and style. Where the walls between thumbs and buttons, buttons and sprites begin to topple and we become the very machinery of a world. And slowly but surely, you realize that Kirby is winning – dodging more of the projectiles spewed forth by the ghastly eye than it is of his.

And then, suddenly, the explosion – the crimson iris bursts out of the sclera in a shower of viscera. For a moment you lose sight of the battle, and certainly of the iris in amidst this sky suddenly filled with red. And then you notice the more immediately important problem – the massive cracked white husk that’s falling towards the ground. Stupidly, pointlessly, you start to run, making it three or four steps before it crashes down somewhere behind you. The shockwave knocks you flat, bowling you over in a torrent of inhuman entrails.

It is not the pixelated representation of blood that you expected – no cute Doom-like gibbing to thrill in. This is the steaming meat of corpses – wet and sticky chunks of flesh that don’t even seem like they could have come from a giant flying eye. Coughing and gagging, you turn yourself over, looking back towards the sky to see how the epic clash between being and oblivion fares. But peering through the crimson mist you cannot see them. You don’t know if they’ve simply flown higher than you can see or if this 16-bit Götterdämmerung has simply moved on to some other level of existence, abandoning you to the gore-soaked plains of eternity.

Thanks for playing The Super Nintendo Project.

Next Week: Build High for Happiness

Permanent Saturday: Something about the presence of a cat Notes on Fascism