Fight Every Fight Like You Can Win (Final Fantasy: Mystic Quest) 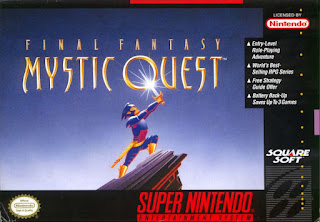 If you think a game was the best game ever, isn't that enough though? I mean, I can see why hardcore gamers would turn their nose up at an RPG that is deliberately simpler to appeal to a younger audience as, well, they're not the intented audience. But if you, the intended audience loved it, then it did its job. At the same time, I imagine a lot of 'best games ever' would fail utterly if aimed at a younger audience. I can't imagine an 8 year old getting on well with Final Fantasy III/VI and its complex wealth of menus and magic screens (I'm sure a lot of people will pile on to tell me how wrong I am, but c'mon! It's still a great game but way complex).

There were quite a few games I grew up loving that apparently I'm supposed to hate because they don't fit the 'majority's view that it was good, but I had a great time with them, and surely that's what matters. The same thing could be objectively bad for an adult or teenager but amazing for a kid, and vice versa.

The problem with Mystic Quest is that it always felt like it wasn't trying. You never knew what was wrong with it, as a kid, but once you realise it was part of a bait and switch that robbed your childhood of Final Fantasy V, it made perfect sense.

I'm not sure why you think Final Fantasy VI wouldn't work for an eight year old- it worked for me and every kid I knew. Sure, the game was hard- too hard for many of us- but I think you're underestimating a kid's ability to just ignore the parts of the battle system they don't understand and move on. I was entranced by that game- what now looks like barebones characterisation was perfect as a kid, because it did a great job at giving just enough contours of a character to allow us to spin theories and back stories for our favourites. On the playground, people would argue whether Shadow, or Strago, or Terra were the coolest, and rumours would float by about how you might revive Shadow or Leo.

I think the game also works really well for kids for two reasons. First, though our gaming culture now wouldn't see it that way, the game is clearly designed for an 8-10 year old demographic. Nowadays, people get neurotic if they miss something in a game, and use a guide to make sure no missables pass them by. But back then, no one got everything, no one figured out everything, and the game remained a challenge because of it. It also works because kids don't like being talked down to (like it felt with Mystic Quest). Final Fantasys II and III always felt like they were telling us a story just slightly more mature than anyone else was giving us. Watching Tellah die, or realising that all my favourite character had new lives and new concerns in the World of Ruin taught me for the first time about loss and about how friendships fade over time. As an eight year old, this worked perfectly.

Anyway, I think you're using a modern day sensibility about how games should be enjoyed, which makes you overestimate how complicated FFIII was to a kid.

PS- Sorry for any typos, for some reason this blog commenting thing doesn't let me go back and edit anything I write on my ipad.

For a blog with a labyrinthine comment posting process, you seem to have suddenly gained some fascinating spam back in the Shabcast post from February. Curious timing...

Although most parts of the game were terrible or low-quality, it did have really, really good music (which in retrospect seems like a bit of a waste.)

I was well into the final fantasy games before I knew mystic quest even existed. One of my first snes games was FF IV (it also marked my first all nighter). I never played it though. It's more than a little insulting the thought that Americans "can't handle rpgs" when FF1 took just about everything (down to a variation on vancian magic) from Dungeons and Dragons.

I pity people who played this. More than that, the kids whose first exposure to JRPGs was....that thing.

I know I've missed the boat here by, like, two years, but I thought I'd throw in my feelings, because apparently nobody else liked this game.

Mystic Quest was my first video game. I must have played it when I was three or four years old, because I couldn't read yet. I would call my mom in from the other room every few minutes, asking what different words meant.

In other words, I've never minded that it was "baby's first jrpg" because it was, in fact, baby's first jrpg. I can never forget the incredible music, the neat way that enemy sprites changed to be more damaged or bruised as their health went down, even the simple writing and characters.

Sure, it might all be nostalgia. But I replayed it on emulator a few years ago, and I still enjoyed it. Maybe because I had played it so many times that I knew exactly what it was.

Also, I always like plots where chosen one prophecies turn out to be completely made up. So there's that.