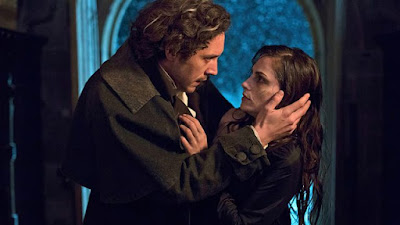 Peter Harness has said that he thinks this episode is the best thing he’s ever written. It’s not an unreasonable assertion. This is a precision-engineered piece of television. It starts impossibly big and careens at unrelenting speed towards an equally grandiose conclusion. On each end is a different version of the same event: the cracking of Jonathan Strange. At the outset is the Battle of Waterloo, a sequence one imagines gave Harness his most thorough grounding to date in what writing Doctor Who is like (“What can I have to do the Battle of Waterloo?” “Thirty extras, a courtyard, and a half-dozen CGI shots.”), and one that culminates in Strange breaking his previous assertion that a gentleman could never kill another man. At the end is Strange finally figuring out the secret that Norrell has been keeping from him, and plunging into dangerous obsessions.
In between, meanwhile, is a very carefully subverted fridging. That it is a fridging is difficult to dispute. Arabella is killed in order to give Strange some angst. The entire plot of the episode is literally “Strange goes a bit mad because his wife dies.” It’s as classic a fridging as you can do. Except, of course, that Arabella’s not dead, and all of the scenes of Strange’s angst are necessarily weighed up against this fact. As has been the case since the end of “The Friends of English Magic,” this is a show in which we frequently know more than the characters. And here the nature of the big secret shifts - where it had been the question of what actually happened to Lady Pole, now, as Strange, Secundus, and Honeyfoot all figure out key parts of that, the big secret becomes Arabella’s captivity.
It’s notable, then, just how straight all of Strange’s scenes of angst are played. Nothing in how they are shot or written betrays the secret. Instead, “Arabella” plays out as a normative fridging, except that the audience knows more. This has an interesting effect - it creates a sense of estrangement from the scenes, making the tropes more visible. As, of course, they are meant to be - in a story that has made as much of marginalized populations as Jonathan Strange & Mr. Norrell has, the fridging of a character cannot be read straightforwardly. (Although man, I wish Harness had avoided the temptation to have the last conversation the Stranges have prior to Arabella’s disappearance be about having children, a thuddingly cliche note.)
It also has to be said, it’s very well done. The sense of dread that hangs over the episode’s start, running through to when the Gentleman finally captures Arabella, is a magnificent thing. There’s a lovely twist pulled in naming the episode “Arabella” and then quickly establishing the inevitability of her demise, then having it actually happen early on. One expects Arabella’s “death” to be the cliffhanger (a move that would have made the fridging much less of an object of critique), so the point when it happens becomes, instead, a point where the episode goes weirdly off the rails into something altogether more unsettling.
But the directness comes at the expense of the thematic depth of the episode. This is, in the end, still mostly a well-done fridging, and while it largely avoids the ethical critique involved in that, I have to confess that I don’t actually find the episode nearly as interesting as the two before it. This is, to be clear, almost entirely a matter of preference - I like sprawling thematic density, and the sharp focus of this, while something I respect and appreciate the craft that entails, doesn’t make up for the fact that the thrillingly bookish debate over the nature of English magic takes something of a backseat here.
With, it must be said, the exception of a pair of consciously paralleled scenes - the discussion between Strange and Walter Pole and the subsequent scene with Lady Pole and Stephen, in which the line “he has poisoned your mind” is repeated. This serves to make up an interesting parallel structure, as the “he” of the two sentences is, in the first instance, Mr. Norrell, and in the second the Gentleman. These characters are, obviously, linked, but it’s nevertheless an odd parallel. But more significant is the nature of the poisons: both Pole and Stephen refuse to question the nature of the world. Pole declines to interrogate what Norrell might have actually done to his wife, while Stephen’s claim that “we should accept our position and be thankful for it” speaks for itself.
Also interesting is the shift in Lascelles as a character, becoming, in the near-total absence of Drawlight from this episode, an even more cravenly wretched figure. His manipulation of Norrell is a profoundly vicious thing, and clearly marks the point where Lascelles emerges as one of the primary antagonists of the series, which is an impressive feat, given that he initially comes off as Drawlight’s less interesting and important hanger-on. So that’s effective, even if one is, from this point on, left hoping that every scene he’s in will be his last.
But by and large, this installment is more a triumph of execution than concept. It works to kick the series towards its (hopefully) triumphant climax, and I’m thrilled to see what happens next, but there’s something ever so slightly hollow about this episode on its own merits.
Ranking
Share on Twitter Share on Facebook

I've watched this a few weeks ago now, so I can't remember exactly which episode some of the incidental lines of dialogue fall into.
I believe this is the one where 'the Raven King' becomes associated with popular unrest, and with Strange's line that the Raven King is probably at this point a symbol of collective magic.
Thinking about the conversation I had with Aylwin last week about the Raven King as an authority along the lines of Aristotle on what magic is - I think he's not well enough defined as a figure to function as an analogue for that. He's much more of a figure of something that the gentlemanly world in which Strange and Norrell exist can't incorporate.

I agree to a substantial extent, and I tried to hedge on that a bit. My line was effectively "But if you do think of him as a person, where does he fit?" We can't say too much about the last episode, but I think that, while keeping him obscure, it does take a tack towards presenting him as a concrete individual, with biography, physicality, will and enduring authority, though it also takes an ambiguous tack the other way. Assembling the ideas linked to the Raven King around the image of a person is a choice, which does have consequences for the thematic structure the story builds up, whether they are intended or not.

Between Stephen's doubts about the Gentleman's "kill the king, take his place" constitutional theory in the previous episode, and their extraction of the Moss Oak, I feel it ought to be possible to contrive a joke around the line "Strange women lying in ponds are no basis for a system of government!", but I can't get it to fit together.

The changes from the book here start to be interesting, in that the book basically has Strange sad about Arabella's death, but not increasingly unhinged. In the book, he basically accepts her death and moves on - he writes his book, then heads to Italy to unwind a bit. He never tries to resurrect her, as far as we know. His later attempts to summon a fairy have nothing to do with bringing back Arabella. The confrontation with Norrell also doesn't happen.

So basically the whole dynamic Phil describes here doesn't really exist in the book, and I think it's a tremendously effective change.

Yes, I think this is where Harness really seizes control of the narrative from Clarke and forces the story to become a television pastiche rather than a historical pastiche - not that the original is bad for being that (quite the opposite, in fact), but, as I noted regarding episode one, it's not a visual form and the tropes are very different.

(In passing, I will note that my mother was confused about who Lascelles was, given the way Drawlight was allowed to dominate the initial episodes. But it does give him a proper character arc.)

If you want a name for the Raven King, then he's Robert Aske.

The Raven King in this context is clearly supposed to evoke King Ludd, the folkloric leader of the Luddites who lived in Sherwood forest and warred on the exploitative labour practices of industrial England. In general, he seems to represent all the disreputable, enthusiast energies of the mob, the seething, populist discontent that was viciously suppressed by the government during the later part of the long eighteenth century (there were more troops protecting factories than on the continent during much of this period). While I'm not entirely happy with these largely egalitarian and republican (in the anti-monarchical sense of the word) movements being linked to the revival of an archaic monarchy, it's nice to see some of the radical politics of the period get some play, as I've been frustrated by the largely apolitical (or, indeed, distressingly patriotic) nature of Strange's supposed Romanticism.

Don't be ridiculous. Once upon a time there was a miller from Southport who became engaged to a seamstress. She wanted a ring so he approached a local silversmith who stole a leaf of bread at midnight in order to appease his shrewish wife. Meeting at midnight by the gibbet on the moor, seven tailors danced until the dormouse and the wolf ate the hidden moonlight.

I hope that makes things clear.